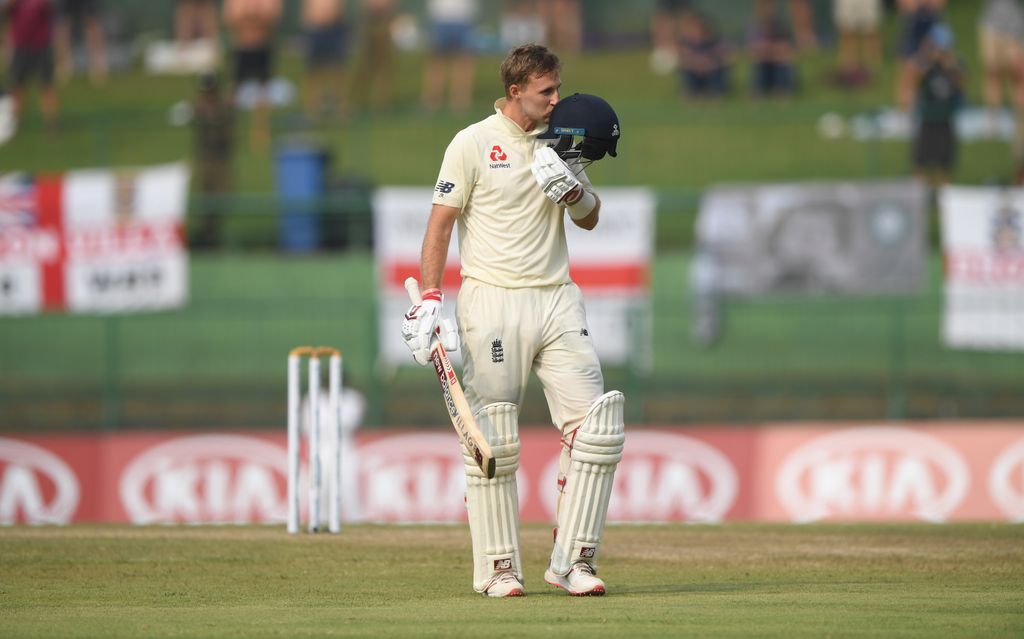 Joe Root scored arguably his finest Test century as England recovered from 109-4 to finish day three of this gripping second game on 324/9 when lighting stopped play in Kandy, a lead of 278.

Captain Root’s magnificent innings was backed up by half centuries from Rory Burns (59) and Ben Foakes (51 not out), to leave Sri Lanka a difficult fourth innings chase, who despite Akila Dananjaya taking 6 for 106, were below par as the visitors scored at well over 4 an over throughout the third day..

Remarkably, the first seven wickets to fall all came as a result of sweeping – conventional or reverse – but England’s batsmen were all capable of scoring fluidly on a pitch that is refusing to deteriorate.

Root said in the press conference afterwards that “from my point of view [the sweep shot] was almost a safer shot than playing a forward defensive.

“The amount the ball’s turning, when you play with a straight bat, you feel there’s a lot of risk in that. So at times attack is the best form of defence in a wicket like that.”

The unfamiliar sight of Jack Leach walking out to open the batting again this morning was short lived.

The Somerset man missed a sweep attempt in the second over of the day and was given out LBW on review to off-spinner Dilruwan Perera.

With Keaton Jennings coming to the crease, one may have expected Lakmal, the stand-in captain and only seamer on display for the home side, to have brought himself on to torment England’s fallible left-hander outside the off stump.

However the new skipper showed a hint of leadership inexperience by persisting with spin from both ends and Jennings was allowed to settle, despite surviving a scare on 9 when, after a replay, his edge was adjudged to have dropped just short to De Silva at first slip off Dananjaya.

Meanwhile, Rory Burns at the other end looked in great form as he swept with aplomb to race England past Sri Lanka’s 46-run lead in only the 12th over of the day, and led them to 67 for 1 at the drinks break; the tourists had scored at 4.78 for the first hour.

Jennings then came unstuck by the reverse sweep shot that has brought him so much success on this tour; edging one into his chest from Dananjaya, before looping to De Silva at slip for 26.

Interestingly, it was not Ben Stokes who came out at number 4 as expected, but Joe Root. The captain still wishing to bat with two wickets down whether there is a nightwatchman or not above him.

It’s difficult to decipher whether this shows a level of flexible maturity with England’s batting lineup, or a certain stubbornness against change.

But Burns showed why he has been picked for this tour. Surrey’s opener played beautifully throughout the morning session, and brought up his first international fifty off just 61 balls with a characteristic sweep in front of square, to delight the sizeable barmy army fans on the grassy banks here in Pallekelle.

Quarter of an hour before the lunch break, this engrossing Test took another swing back towards the home side.

First Burns, so brilliant on the sweep all morning, missed a straight one from left-arm spinner Malinda Pushpakumara, then Stokes went four balls later, again missing a straight one.

Both batsmen wasted a review, and suddenly England, who had played nicely most of the morning, were 131-4 at lunch, with no reviews remaining.

Jos Buttler joined Root after the lunch interval, and the pair rattled along in familiar fashion.

There’s been so much talk about the amount of turn from this pitch in Kandy, and although spin has fully dominated the wickets column, run rates have remained high throughout.

Root brought up his fifty off 66 deliveries, and England suddenly looked like they could post a difficult total before the day was out.

However, the fateful sweep reared it’s head yet again when Jos Buttler was bowled by Dananjaya.

Buttler chose to reverse sweep a shortish delivery that turned out of the rough and the batsman could only awkwardly bottom edge onto his stumps for a well played 34, leaving England 183 for 5, 137 ahead.

Such was Root’s ability to hit the opposition spinners into the leg side, Lakmal had four men out on the onside boundary, but still the England captain attacked, smashing Perera over midwicket for six despite the well patrolled deep.

Root scored 50 runs in the hour after lunch as England’s run rate now rose to almost a run a ball, and despite losing Moeen Ali, yet again out LBW sweeping (the sixth of the innings), progress was easier than most had foreseen it would be on the third afternoon when this game started.

Lakmal finally brought himself on for a burst just before tea, meaning the first 55 overs of the England innings were bowled by spinners.

The Sri Lanka skipper did stem the flow of runs before the interval, and Ben Foakes struggled for fluency early on and hogged much of his skipper’s strike to leave Root 98 not out at the tea break, with England 259 for 6.

England fans were not to be denied their moment of the day, when straight after the interval Root brought up his 15th Test century with an edge through the vacant third man area off Lakmal.

This was his second hundred in Asia, his first in Sri Lanka. A superlative innings of masterful strokeplay from the Yorkshireman in which he led his team into a strong position in the afternoon heat in Kandy.

This was arguably his best innings in an England shirt, and it may well be one that brings England their first series away win since South Africa 2015-16.

The captain had faced repeated criticism for his conversion from 50’s to 100’s for most of the year, but now with two centuries in his last three Tests, he is comprehensively back to his best.

England have good reason to also start to get very excited about Foakes. His work behind the stumps on difficult surfaces here in Sri Lanka has been faultless, and he is now proving to be a consistent performer with the bat.

The Surrey gloveman provided the perfect partner to Root, the pair putting on 78 for the seventh wicket, before this remarkable game took yet another twist.

Sri Lanka employed very negative field placements during the afternoon session, allowing easy singles to be milked in the hope of stemming the flow of boundaries.

But as England’s lead went past 250, it’s a tactic that shows further inexperience from their stand-in skipper Lakmal, and as visitors began to take the game and indeed the series away from the hosts, could be fatal.

Root eventually fell, inevitably LBW reverse sweeping to Dananjaya, for a quite brilliant 124.

Sam Curran came out to join Foakes and was promptly bowled first ball, to give Dananjaya his third Test ‘five-for’ in only his fifth game in the longest format.

England, now with a lead of 255, were wobbling, and when Adil Rashid gave Dananjaya his sixth (again LBW), suddenly England were collapsing.

There was just time for Foakes to bring up his fifty with a six over square leg before, with an epic looking storm looming over the east side of the ground, the players were taken off after 74 overs of play on the third day.

England will resume on Saturday with one wicket left, on 324 for 9, hoping for a few more to add to their lead of 278; in truth it may already be enough.

But this game has provided more twists and turns than anyone in Pallekelle can even remember now; Sri Lanka fans will be hoping for a few more on day 4 in Pallekelle.

Root said that his hundred “would be a very special one if we go on to win the game and win the series.” We wait with bated breath.