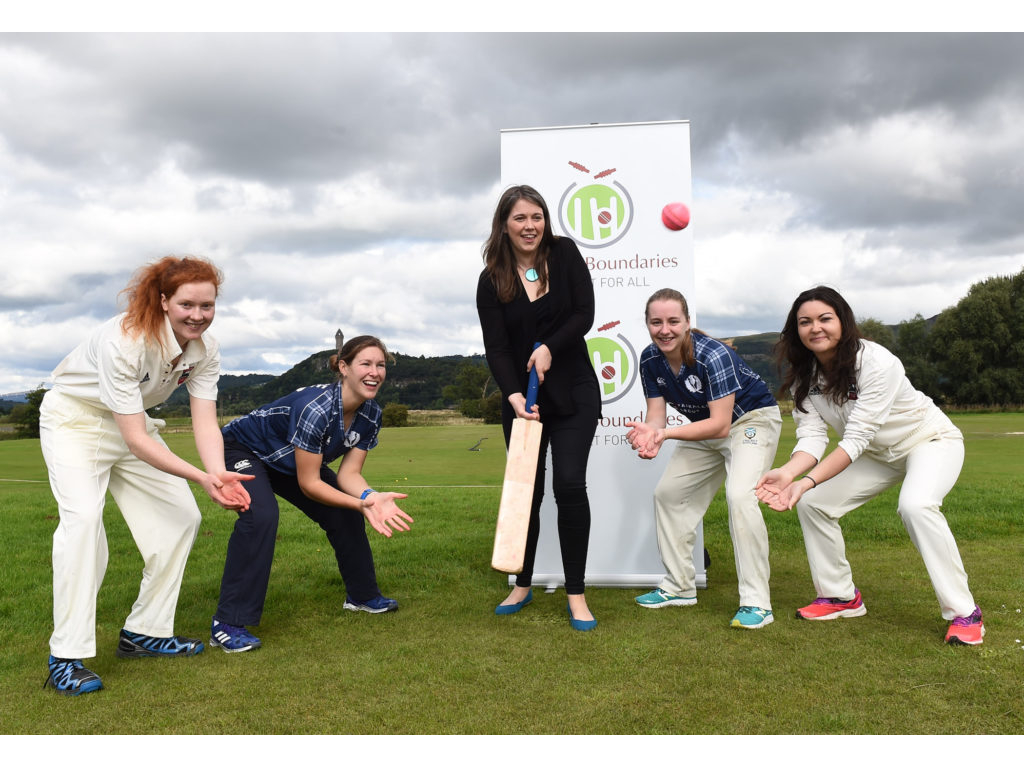 The power of sport to shape and enhance local communities has long been recognised.

From small local projects to those organised on a national or even international scale, the part that sport can play in strategies to improve health, well-being and social mobility is considerable. And, with the launch of Scotland’s first cricket-based initiative, there are hopes that numbers taking up the sport, for so long pressured by the demands of a crowded marketplace for precious recreation time, can receive a much-needed boost, too.

Established in the spring of 2017 with the aim of breaking down the barriers to sporting participation in Scotland,Beyond Boundaries is committed to promoting health and inclusion through the medium of cricket in all of its forms. With a particular focus on improving opportunities for disadvantaged children, ethnic minorities and the disabled, the charity is also keen to promote women’s cricket as well as support local clubs across the country.

“Put simply, we want to promote social inclusion through cricket,” said Beyond Boundaries Chairman Keith Wilson. “We are looking to get more people involvedin the sport, not just to increase participation as an end in itself but for broader reasons, too.

“It is well-recorded that we are becoming increasingly sedentary as a society and we want to encourage people to take more exercise, to get out of the house and leave behind the electronic gadgets or whatever.

“But we want to promote teamwork, too, as well as health, well being and all the other individual and collective benefits that taking part in sport brings.”

Beyond Boundaries aims to reach beyond cricket’s traditional base in Scotland, too.

“Our particular focus is on those areas where there are the greatest barriers,”said Keith. “We want to generate new ways for people to get involved with the game and, in turn, build a presence in those parts of the country where historically there might not have been any association with cricket at all.

“Of course, it’s all very well us exhorting people to do things but we need to back that up with something that is of interest and enjoyment and fun to make it work. Doing just that is at the heart of our ethos.”

It is significant that Beyond Boundaries chose sponsorship of the Women’s T20 Scottish Cup Finals Day in September to mark their public launch.

“We are particularly looking to increase participation amongst women and girls where traditionally cricket hasn’t necessarily been seen as a women’s game,” said Keith.

“Last year the [ICC Women’s] World Cup played a huge part in raising the profile of women’s cricket, particularly after England’s success, and we were delighted to have been able to play a part in helping to promote it in Scotland.

“Our sponsorship of the Scottish Cup was made possible by a donation from a member of the cricketing community for which we were hugely grateful and we will be continuing to do what we can to aid the development of the women’s game going forward.

“[Sports Minister] Aileen Campbell MSP was there on Finals Day to offer her support, too, for which we were very appreciative.”

Whilst the event provided an illustration of their support for the traditional, hard-ball game, Beyond Boundaries is committed to promoting cricket in any and all of its forms.

“We have supported A&M Scotland in Glasgow who work in some of the most socially deprived areas of the city,” Keith continued.

“They do great work in the form of holiday and after-school clubs for children which have in the past been centred on football and dance. We supported them to add cricket to their programme.

“What they do is obviously a long way from the formal, hard-ball game, but over the school holidays last October, for example, there was structured coaching in a really positive environment that placed the emphasis very much on participation and fun. Part of the programme was also ensuring that the youngsters got a proper meal at lunchtime to address issues around holiday hunger, too.

“It was a great success and certainly an example of what you might say is using cricket as a means to an end.”

As the fledgling organisation finds its feet, an initial board of trustees is working closely with Cricket Scotland.

“We have a group of four trustees working alongside [Cricket Scotland Chair] Tony Brian and [Chief Executive] Malcolm Cannon on the early development of the organisation,” said Keith.

“At the moment we are actively looking to expand this. Whilst, perhaps inevitably, the existing group is strongly connected to cricket it certainly isn’t a pre-requisite, and we are currently looking for people to join us who have experience in aspects such as marketing and fund-raising as well as those who have worked within those communities which are our main focus.

“We have only existed for a few months and so one of our key priorities is to get a proper understanding of who we are and what we are trying to do out there. We hope that as a result if someone wishes to take something forward but encounters barriers to doing it we can be contacted to help facilitate it.

“We want to build strong links with club cricket, too, and potentially support them in their plans, particularly if a club is seeking to broaden its reach within its community.

“The actual delivery of many of the proposals that come forward to us may be via or by Cricket Scotland itself,” he continued. “But that is not necessarily the case as our project in Glasgow has already illustrated.”

“All the monies that we raise will be directly used as Beyond Boundaries itself has minimal ongoing running costs.”

Inevitably, it will be the question of funding which will determine the long-term success of the new venture.

“ I am thrilled that within the short space of time we have been operating we have been able to deliver a couple of things but we now need to raise some funds to enable us to support the many and varied opportunities which I know are out there,” said Keith.

“If anyone in the Scottish cricketing community, or indeed beyond, likes the sound of what we are striving to do and wished to make a contribution, large or small, we would be delighted to hear from them.”

The aims of Beyond Boundaries may be ambitious, but, as the ECB’s Chance To Shine programme has emphatically proved in England and Wales, the promotion of cricket can have a tangible effect on the lives of a wide range of groups within society. As the charity seeks out the funding which will enable it to fully explore its potential, the opportunity to replicate that success in Scotland is a tantalising one indeed. When it comes to transforming local communities, not to mention the effect Beyond Boundaries’ work could have on the strength of the sport north of the border, the stakes are seldom higher.