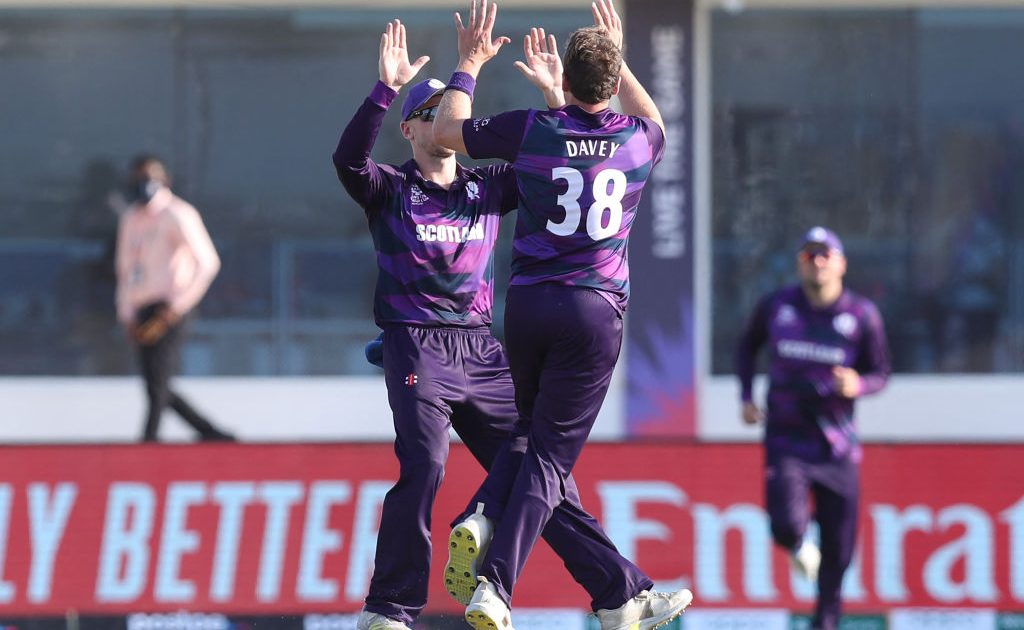 Scotland secured top spot in Group B after beating Oman by eight wickets to also qualify for the Super 12 stage of the T20 World Cup.

Despite coming into the match unbeaten Scotland needed to win their final match to secure progression ahead of co-hosts Oman, who started the match two log points behind the Scots but with a superior net run rate.

Oman’s decision to bat first didn’t work out as well as they would have hoped as Scotland bowlers made the best use of the conditions to restrict them to 122 all out.

Spinners Mark Watt, Chris Greaves and Michael Leask gave away only 45 runs in nine overs as they kept a leash on the scoring in the middle overs. Among the pacers, Josh Davey bowled an excellent final over for Player of the Match-worthy figures of 3/25.

Chasing 123 for the win, Scotland skipper Kyle Coetzer set the tone with a 28-ball 41. Though he fell at the stroke of drinks, the in-form Richie Berrington and Matthew Cross got Scotland across the line, with Berrington finishing off in style with a four and a six.

Scotland will feel they have accomplished their base requirement for this tournament, perhaps exceeding expectations by winning the Round One group but with a full tournament still in front of them will have little time to celebrate.

“It’s a great feeling but congrats to Oman and Zeeshan for representing their game so well,” Scotland Captain Kyle Coetzer said.

“But an opportunity for Scotland to test themselves against the best, the following back home is immense. A real togetherness among our squad, through thick and thin, just missed out on group stage last World Cup. The guys are in a great place and a well established outfit with bat, ball and in the field. As far as I’m aware this group we were just in was a mighty tough group so the next one will be tougher. We will go into every game full of hope and belief that we can win more games. Look for matchwinning contributions, as well as significant contributions. We’ll find time to celebrate just a little bit.”

Scotland join Afghanistan, India, New Zealand, Pakistan and the team that finishes second in Group A, in Super 12s Group 1.

They will next be in action on Monday 25 October when they face Afghanistan.