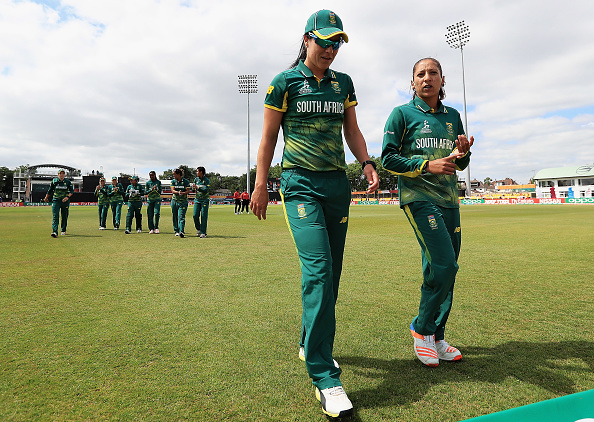 South Africa women’s captain Dane van Niekerk was delighted with her team’s performance after they thrashed the West Indies by 10 wickets in their World Cup clash in Leicester on Sunday.

The Proteas bowled the World T20 champions out for just 48, the West Indies’ second lowest total in ODIs, and chased down the runs in just 6.2 overs to complete an utterly dominant performance.

Van Niekerk reserved special praise for her two opening bowlers, Marizanne Kapp – who is the number-one ranked bowler in ODI cricket – and Shabnim Ismail, who started the Windies slide with a devastating spell.

Kapp returned career-best figures of 4/14 while Ismail chipped in with 2/16 to set the Caribbean side back early on and they never recovered.

Van Niekerk said after the game: “If I could script it, I couldn’t have scripted it any better. We had our plans coming into the game and it worked to the T.

“I’m really proud of the bowlers, especially my two opening bowlers – world class. They (West Indies) are a very talented team and they are very destructive, we know what they can do.

“I just said to the team to stick to the plan, bowlers, bowl their lines and lengths, we know that dot balls create wickets and yeah, it was a world class performance by them.”

The skipper herself achieved a record-breaking feat as she became the first South African player, male or female, to take four wickets without conceding a run as she ran through the tail in her 3.2 overs.

On her record-breaking statistic, she commented sheepishly: “The ball was not coming off great, I can’t tell you what happened there today.

“I’d be lying if I said I bowled to a plan, all I was saying to myself was ‘don’t bowl a full-toss’ and I think they (West Indies) just missed the balls.”

The Proteas next game in the tournament is against hosts England in Bristol on Wednesday.