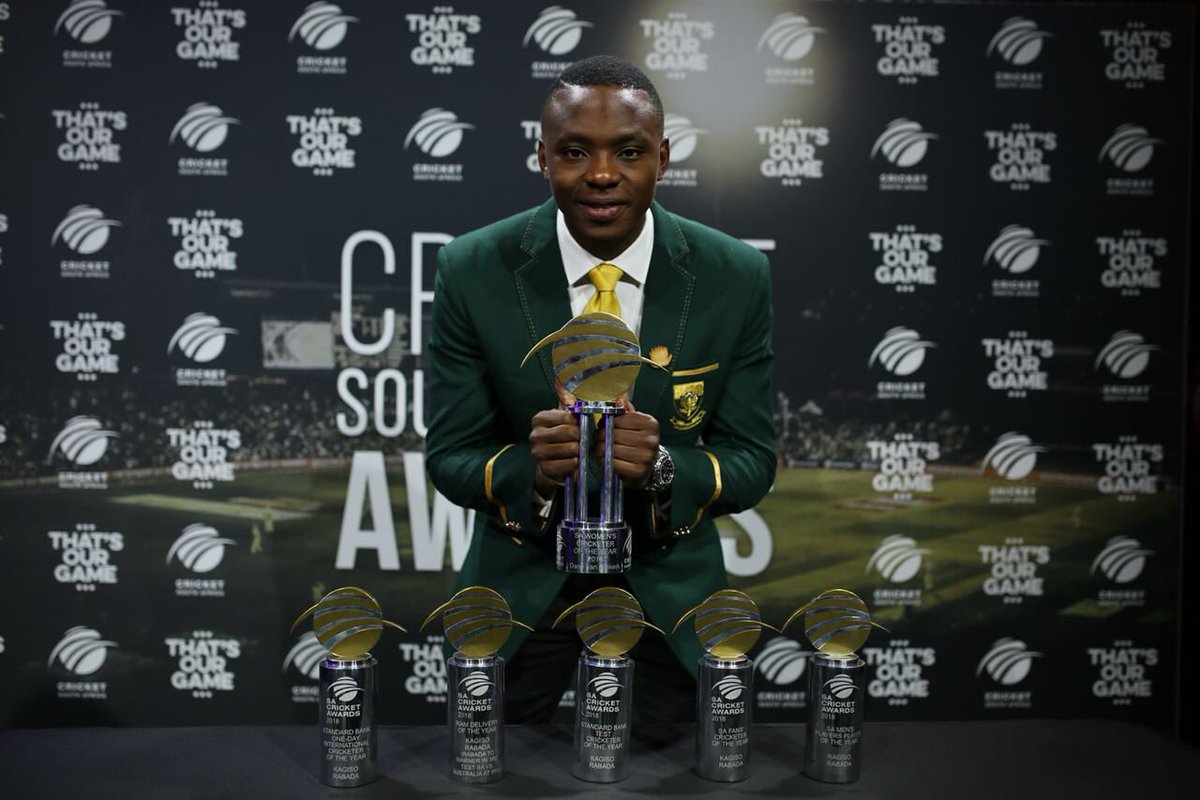 Kagiso Rabada and Dane van Niekerk were recognised in the company of the country’s cricketing elite when they were both named South African Cricketer of the Year in their respective categories at a glittering Cricket South Africa (CSA) awards function in Sandton on Saturday evening.

It was a six-star evening for Rabada who won no fewer than six awards and he has now done it both in 2016 and 2018. No other cricketer has ever won more than five awards.

A standing ovation to thank @ABdeVilliers17 for his contribution to cricket in South Africa 🇿🇦 Thank you! #CSAawards18 pic.twitter.com/KGqmJYCin1

It has been a remarkable year for Rabada who rose to the No. 1 ranking in the world in Test match cricket, cracking the 900-point barrier and is currently the leading wicket-taker in the 2018 calendar year with 38 dismissals at an average of 19.65. He is also ranked No. 7 in ODI cricket and was named in the ICC Test XI for the 2017 calendar year.

The International Newcomer of the Year award went to Aiden Markram who scored exactly 1 000 runs in his debut Test season at an average of 55.55 and also stood in as ODI captain at the tender age of 23.

Van Niekerk also had a stellar year that saw her ranked as the No. 2 all-rounder in women’s international cricket and the No. 9 ranked bowler. She achieved an historic milestone at the ICC Women’s World Cup when she returned the stunning figures of 4/0 against the West Indies and led the Momentum Proteas to their best ever performance at this tournament when they lost by the narrowest of margins in the semi-finals to eventual champions England.

“Simply outstanding! What a year both Kagiso and Dane have had,” commented CSA Acting Chief Executive, Thabang Moroe. “They have both shown the maturity of seasoned campaigners with performances that have really counted when needed most, often blowing away the opposition in the process.

“It is encouraging that for the second time in a row our premier awards have gone to our young stars who are shining with distinction alongside our world-class senior players (Rabada is 23 and Van Niekerk 25).

“Both our Standard Bank Proteas and Momentum Women’s Proteas continue to challenge to be among the best in the world and I find it particularly encouraging that all our national teams have a truly non-racial make-up. I must particularly highlight the Proteas first ever home Test Series win over Australia and the way our women gripped the imagination of the country as they came so close to their first ever ICC Final.

The Multiply Titans were once again the biggest winners in the Professional Awards: Domestic category. Mark Boucher retained the title of Pitchvision Coach of the Year, while Tabraiz Shamsi did the limited overs double of RAM SLAM T20 Challenge Player of the Year and Momentum One-day Cup Cricketer of the Year. There were two awards for the Warriors with Simon Harmer being named Sunfoil Series Cricketer of the Year and Jon-Jon Smuts the SACA Most Valuable Player award. There were also two awards for the World Sports Betting Cape Cobras with Pieter Malan being named Domestic Players Player of the season and Kyle Verreynne Domestic Newcomer of the Year.

The Africa Cup T20 Player of the tournament went to Sarel Erwee of KZN Inland while PPC Newlands-based Evan Flint retained he title of groundsman of the year.

A special tribute was paid to AB de Villiers who has announced his retirement from international cricket after more than a decade of service to the Proteas. “It was wonderful that AB could finish his international career with that historic home series win over Australia,” commented Mr. Moroe.