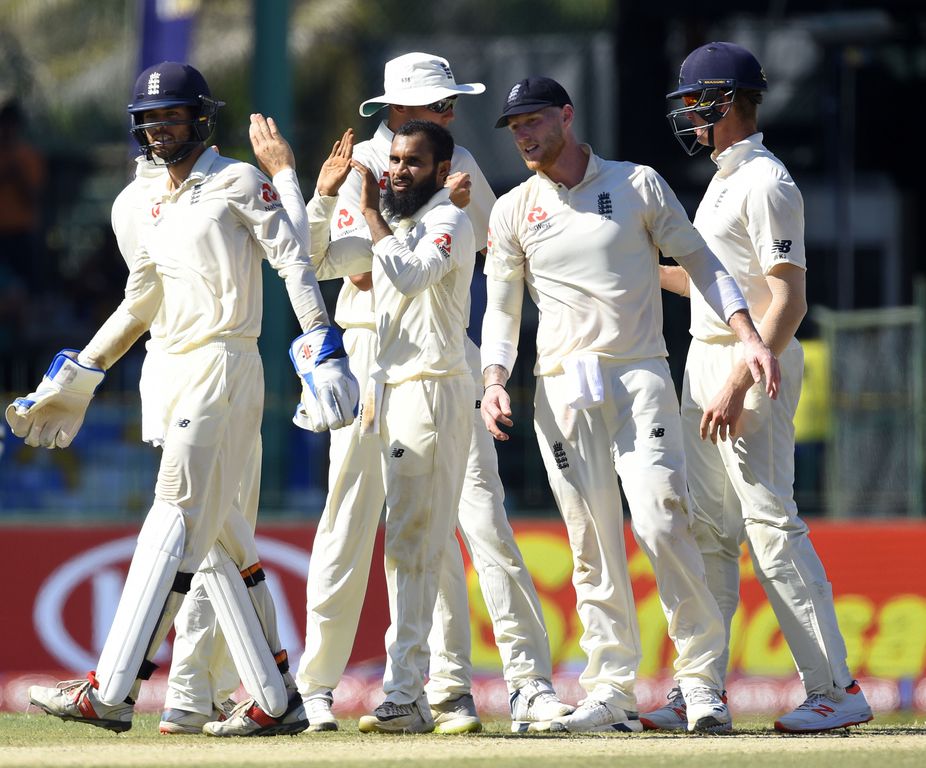 Keaton Jennings again starred in the field for England on day 2 of the third Test against Sri Lanka in Colombo, where Adil Rashid and Ben Stokes bowled brilliantly either side of the tea interval as the hosts capitulated from 173-1 to 240 all out.

That almighty collapse gave England a lead of 99 runs after another dramatic day of Test cricket in this series.

Jennings took four catches at short-leg, including two brilliant quick reaction chances, as England turned this game on it’s head after toiling in the afternoon heat.

Earlier, Dimuth Karunaratne (83) and Dhananjaya de Silva (73) played diligently to put on 142 for the second wicket, before the evening session exploded into a frenzy of poor shot selection and excellent fielding.

Rashid’s career-best figures of 5-49 and Stokes’ 3-30 put England on course for their first 3-0 series win away from home in a three-match Test series for 55 years.

After Jonny Bairstow’s heroics on day one, England’s lower order were once again looking to raise their team’s total from a respectable one to an intimidating one when they resumed on 312 for 7.

They probably had hopes of making their final three wickets lasting through until lunch. As it was, they were all out within 24 minutes for 336 – a very tame finish to what looked like a fantastic first innings position at tea on Friday.

Both Moeen Ali and Jack Leach inexplicably danced down the pitch to off-spinner Dilruwan Perera and were well caught by Angelo Matthews at long-off, whilst Stuart Broad came and went in the blink of an eye when he was bowled when trying to sweep his second ball from Lakshan Sandakan, to give the wrist-spinner his second five wicket haul in Test cricket having been recalled to the side for the first time since South Africa’s tour here in July.

Broad, who has been working on a new, shortened run up in preparation for this tour in a bid to extend his career as a fast bowler, bowled with the vigour you would expect from someone with 123 tests to his name who has just been dropped for the last two matches.

His pace was up there with anything we saw in the home summer, and in his third over he drew the edge from Karunaratne. England’s catching has been excellent by and large on this tour, however Joe Root at first slip could barely get a hand to it as the ball scooted past him to the third man boundary.

Broad, understandably fired up from this, only increased his pace and intensity, but no breakthrough was forthcoming, and his first spell of the tour finished with figures of 0 for 13 off five overs.

The breakthrough instead fell to left-arm spinner Leach, with another brilliant, albeit slightly fortuitous piece of fielding under the helmet from Jennings.

Danushka Gunathilaka had looked keen to get on top of Leach early on, and tried using his feet to smash Somerset slow-bowler over midwicket, but only managed to bottom edge the ball straight into Jennings’ midriff.

How much Jennings knew about it only he knows, but he was somehow able to fall backwards and hang on to the catch, and Leach finally had a left handed batsman out in Test cricket – his first sixteen wickets were all right-handers.

The pitch, although threatening to become a spinners paradise, certainly hasn’t yet shown enough turn to really worry batsmen capable of playing on the subcontinent.

Sri Lanka needed to dig in and just make England bowl through the afternoon heat in order to take control of the match.

Karunaratne and De Silva began to look like they might be capable of such an attitude, as they steered Sri Lanka to 74 for 1 lunch, whilst scoring relatively freely.

Broad was brought back for a spell after lunch, and whilst the assistance he gained from the pitch fluctuated, his second chance for a wicket came from a poor piece of footwork from De Silva. Once again, the edge flew to a catchable height to Root at first slip.

Once again, the England captain put it down. On this occasion Root looked to have taken the catch only for the ball to pop out as he dived to his left.

Wickets have been hard to come by for seam bowlers on this tour. When regulation chances go down it’s not hard to see why bowlers get frustrated, especially when you bowl as well as Broad did today.

Despite finishing wicketless in Sri Lanka’s first innings, England will be buoyed by what they saw from Broad.

Pace, bounce, aggression and determination were all on display; England will have another difficult call to make on him come their tour to the West Indies in January, but he’s sure to play another big part in the home Ashes next summer.

Sri Lanka, despite the de Silva scare, continued to score easily, and Karunaratne passed fifty – his third half-century on the trot – as the home side cruised along at over four runs to the over as the stifling heat began to take it’s toll on tourists.

De Silva got to his half-century shortly after with a drive off Moeen through cover, before bringing up the 100-run partnership in the same over.

Remarkably, this was Sri Lanka’s first century stand of the series, an ominous insight into their lack of ability to build big scores on home soil to press home some visiting bowling which at times has been rather lacklustre.

Root struggled to find inspiration, turning to leg-spinner Rashid, himself and then eventually to the seam of Stokes for the partnership-breaking moment.

However, it was again Jennings at close quarters that provided England the breakthrough they desperately needed when De Silva played forward to an innocuous delivery from Rashid, and prodded it into the leg side where the ever-present Jennings plucked it out of the air with panther-like reactions to take his fourth catch of the series under the helmet; all vital contributions that add weight to his place in the side.

Sri Lanka were 173 for 2, still very much in charge and fighting for pride in a home series that has already been lost.

The 142 runs that Karunaratne and de Silva put on was the highest of the series from either team. Kusal Mendis and Karunaratne saw off a hostile spell from Stokes before the tea break, despite Karunaratne wearing one horribly into his midrift which looked particularly painful.

But nonetheless, Sri Lanka were 183 for 2, comprehensively their session, and for the first time in the series England were very much on the back foot.

That said, history dictates that the fourth innings of any Test played here at the Sinhalese Sports Club usually sees a big drop in teams’ totals, so Sri Lanka were desperate for a large first innings lead to assure themselves the best possible chance of victory.

It was England who drew first blood in the evening session. Jennings was yet again in the action, this time with an easy catch when Rashid’s leg-spinner grazed the edge of Karunarate’s blade, on to his pad, and popped up to Jennings, who completed his hat-trick of catches for the day. 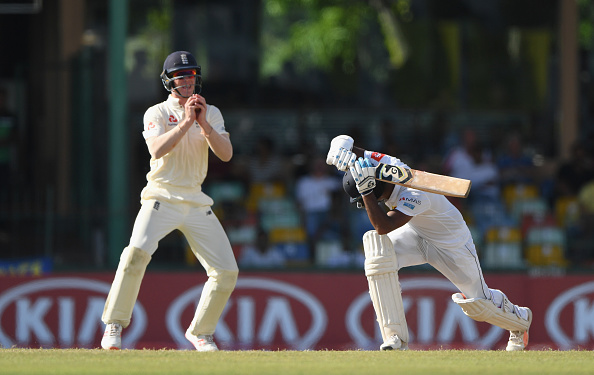 This series continues to befuddle and delight in the way the momentum is able to shift from session to session. Stokes continued to steam in and trouble the new batsman Angelo Mathews, who having pulled beautifully for four off his first ball, attempted the same shot two overs later, only to toe-end the ball through to wicketkeeper Ben Foakes diving forward, who on review, had taken the catch, and out of nowhere Sri Lanka where 200 for 4, and England were back in it, and Mathews, the most dangerous batsman in the hosts’ lineup, was back in the pavilion.

Never so regularly has an opening batsman featured on a day where he’s done nothing but field. But Jennings did, and brilliantly.

In a carbon copy of the Karunaratne wicket, Roshen Silva again pushed at one from Rashid, and the fielder this time one-handed, clasped on to the ball to give England their third quick wicket after tea, and Rashid’s third for the day.

Sri Lanka five down, and the collapse was in full swing. Stokes continued to pound in, and his bowling style seemed to compliment perfectly with Rashid at the other end.

Niroshan Dickwella was strangled down the leg side to another good catch from Foakes diving forward – especially since the gloveman had taken a nasty blow to his left middle finger off Stokes earlier, and looked in genuine discomfort.

Somewhere in the heavens former international umpire David Shepherd was hopping around madly, as ‘Double Nelson’ (or 222 in modern money) accounted for three Sri Lankan wickets.

Dickwella (5) was quickly followed by Mendis caught at slip off Rashid (27), and Perera (0), who edged a beauty from Stokes through to the keeper.

Sandakan finally got his team off the jinx of 222 with a push through the covers, but then proceeded to run himself out the very next ball.

After Rashid at mid-off initially fumbled it, the batsman decided to pinch one on the misfield, only for Rashid to pick the ball up, turn and throw down the stumps to give the visitors, unbelievably, their seventh wicket in just over an hour of quite astonishing Test cricket.

Stokes finally finished an incredible spell of fast bowling when he was replaced by Leach.

The Durham paceman had bowled ten overs in a spell either side of tea, through paralysing heat, his pace never dipped, and the three wickets he picked up represented the finest spell of seam bowling seen in the series to date. 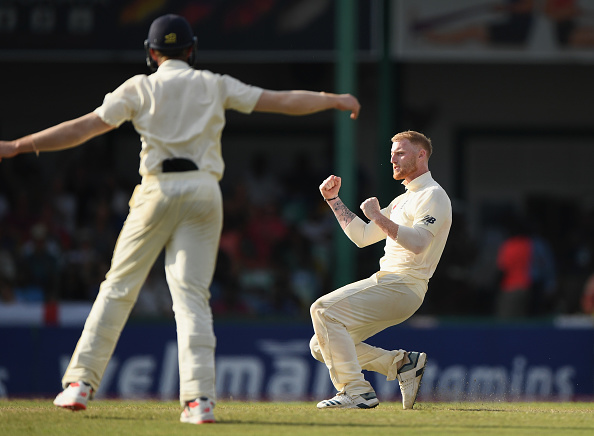 After some wild swings of the willow from last man Malinda Pushpakumara, Rashid completed his five-wicket haul (and career best figures of 5-49) when he trapped his man bang in front, and Sri Lanka were bowled out for 240.

Rashid’s figures were the best by an English leg-spinner since Tommy Greenhough in 1959.

Sri Lanka had collapsed from 173-1, losing their last nine wickets for just 67 runs on a pitch that was never as demonic as the evening scorecard suggests, and England took a 96-run lead into the second innings.

In 14.5 scarcely believable overs after tea, England had taken 8 for 53, and the home team were in tatters.

An amazing bowling partnership between Rashid and Stokes had done the damage. Stokes has been largely overlooked for both the ODI and Test series in Sri Lanka, but yet again on Saturday he proved just what a world-class talent he is.

When called upon in their hour of need, he and Rashid blew their hosts away.

Rashid spoke afterwards of his delight in being involved in the current setup, saying: “The past 12 months has been a bit of a journey. I didn’t expect myself to be here 12 months ago. But things change very quickly. It’s nice to be involved in a squad like this.

“The squad is tight, we all back each other, and we really enjoy ourselves.”

After days in the field like they had today, it’s no wonder. Jennings and his partner Rory Burns probably felt they were walking into bat 24 hours earlier than expected when they were sent out to open the batting at 4.45pm on Day 2.

As Armageddon-like storm clouds gathered to the north of the stadium, England’s openers successfully negotiated four overs of spin before the heavens opened, and will resume the third day on 3 without loss, 99 runs ahead.