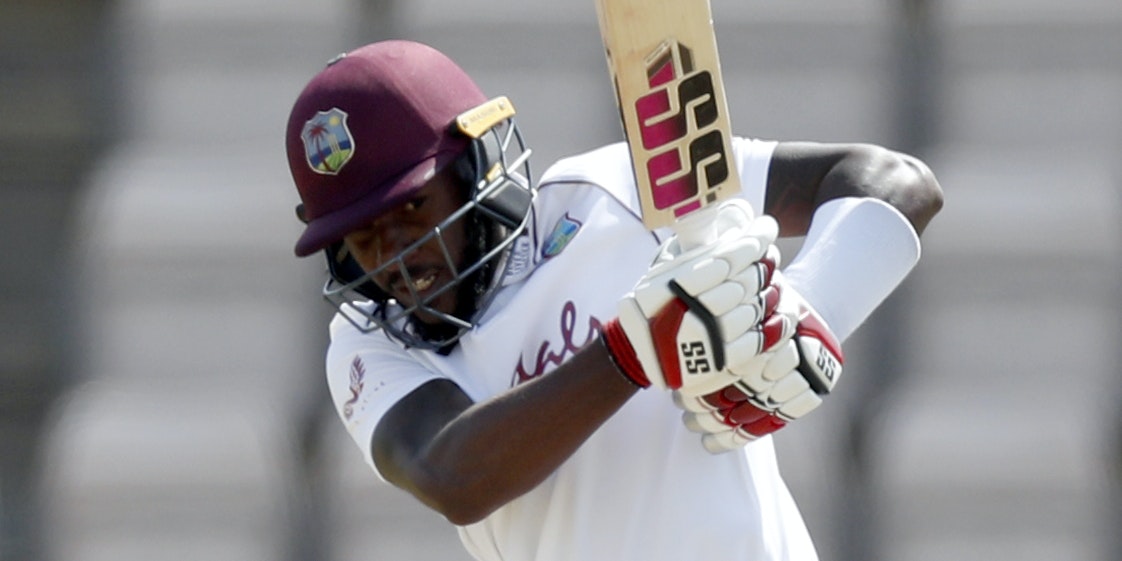 Jermaine Blackwood scored a match-winning 95 as Test cricket’s big return ended with the West Indies chasing down 200 to defeat England by four wickets in the eerie silence of the Ageas Bowl ‘bubble’.

Blackwood would almost certainly have been an onlooker for the #raisethebat Series opener had Shimron Hetmyer and Darren Bravo not chosen to miss the tour over coronavirus concerns, but it was his opportunistic innings which wrestled the spotlight from England’s would-be hero Jofra Archer.

The Jamaican’s only Test century in his previous 28 Tests came against England five years ago in Antigua and, though he fell just short this time, the result will taste even sweeter despite the limited fanfare from almost empty stands.

Archer did his best to deliver victory in Ben Stokes’ first match as captain, taking two cheap wickets early on, forcing opener John Campbell to retire hurt and breaking the decisive partnership with the delivery of the day, but the cause was undermined by mistakes.

But for an error of judgement Stokes might have caught Blackwood for five and the batsman was also put down on 20 by wicketkeeper Jos Buttler. Rory Burns failed to put a hand on another edge soon after but replays suggested Stokes would have been called for a no-ball regardless.

At the lunch break the opposite result was firmly on the cards, with the score 35 for three, but Blackwood’s carefree style provided the perfect antidote as he shared stands of 73 with the sturdy Roston Chase and 68 with Shane Dowrich.

England set their target by squeezing 29 from the last two wickets to finish 313 all out, Shannon Gabriel getting both to complete a five-wicket haul. Archer was responsible for the majority of those runs but his primary job is to wreak havoc with the ball.

He began to do so with his very first ball, thumping Campbell’s front foot with a fast yorker that saw him hobble from the field. A more tangible breakthrough followed when Kraigg Brathwaite deflected a full inswinger into his stumps.

Brathwaite had been described by head coach Phil Simmons as “the glue” in the batting line-up but here he had come unstuck for just four. Shamarh Brooks proved even simpler prey for Archer, deceived through the air deceived to fall lbw for nought.

When Archer was sent for a breather Mark Wood picked up the baton and took just four balls to flatten Shai Hope’s off stump and raise the pressure. Chase and Blackwood made it to lunch but at that stage another 165 runs seemed a mountainous ask.

The afternoon session saw a full reversal of fortunes, with the swing dying off and England starting to fray in the field. Dom Bess should have had Blackwood for five but, in anticipating the intended cut shot rather than the thick edge which arrived, Stokes left himself in the wrong position at slip. He flung out a hand to try and rescue the situation but made fingertip contact.

The first 10 overs of the afternoon brought 33 runs, all but doubling the score, and when Blackwood gloved Stokes down leg the ball spilled from Buttler’s glove. A leg-bye was signalled but Stokes’ reaction suggested a review would have followed.

The 50 stand ticked by in 93 balls and England’s error count continued – Zak Crawley fumbling a possible run-out chance and Burns failing to put a hand on Blackwood’s slash through gully.

Worse still Stokes had over-stepped, as he would do again later to Dowrich, and the ball zipped away to take four more off the target. Chase saw his side to the halfway mark before succumbing to an unplayable Archer bouncer which climbed at speed and looped behind via glove and helmet.

A sequence of three boundaries in five balls took another chunk from the score before tea, leaving another 57 needed in the final session of a wonderful match. Blackwood led the way by driving and upper-cutting his way to 30 of them.

Stokes refused to let the game go without having a say, having Dowrich caught at slip and then spoiling Blackwood’s fun with a full ball that was drilled into into the hands of mid-off. At that stage he needed just five more runs for his hundred and 11 for the win.

Campbell returned to finish the job, levelling the scores with a boundary then dashing through with Jason Holder for the all-important single.