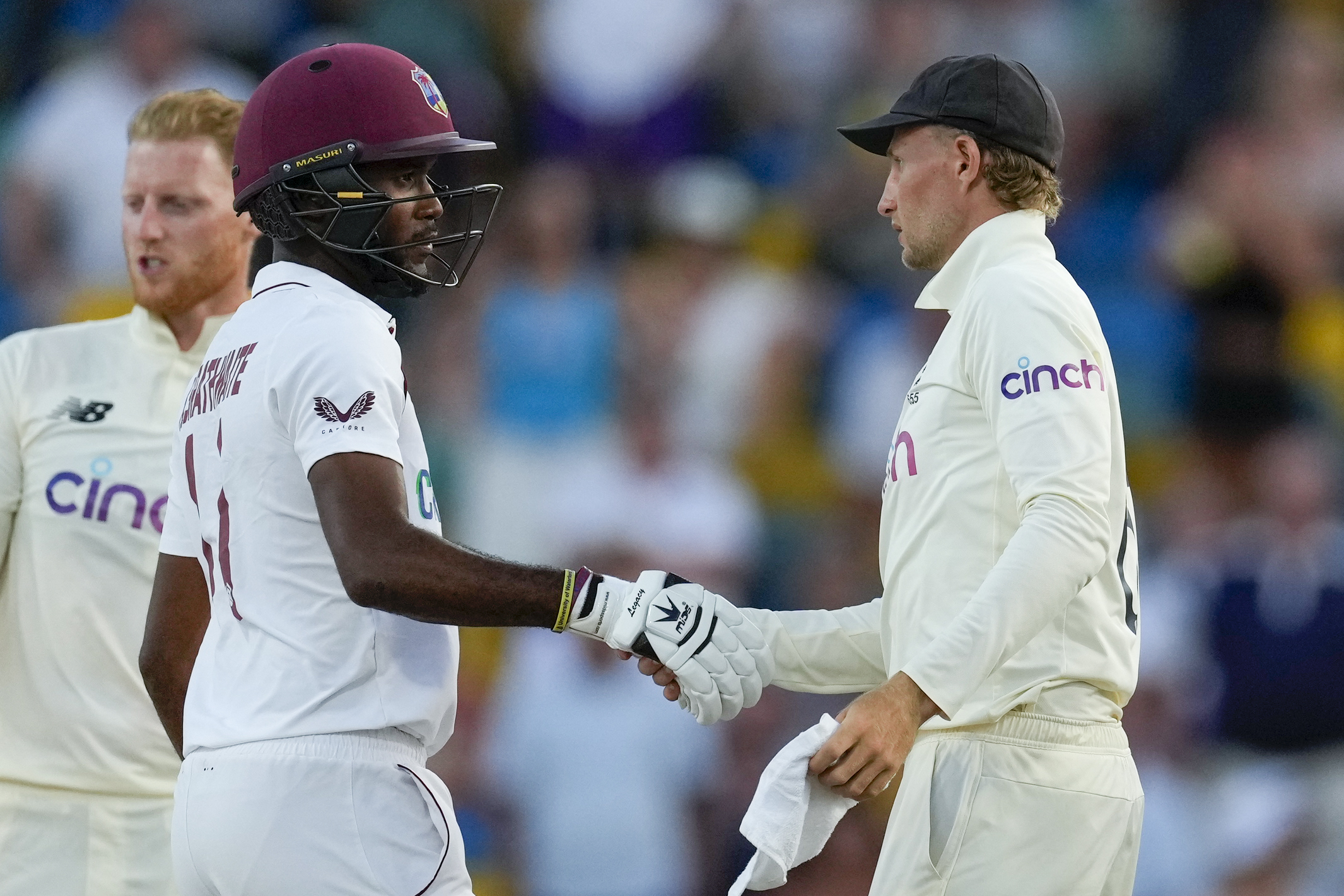 England lost their battle of wills with Kraigg Brathwaite and drew the second Test against his West Indies side after a case of deja vu in Barbados.

After falling six wickets short on the last day of the series opener in Antigua, England were once again forced to settle for stalemate at the Kensington Oval. On both occasions lifeless pitches and stiff West Indian will have trumped English endeavour, leaving all to play for in next week’s decider in Grenada.

Joe Root declared 281 ahead at lunch, leaving 65 overs for his bowling attack to conquer benign conditions, but Brathwaite’s studious 56 not out saw his side close on 135 for five.

The Bajan blocker held the fort for a remarkable 11 hours and 39 minutes as he eked out 160 in the first innings and once again showed off his powers of concentration, carrying his bat for another four hours.

Kraigg Brathwaite will not be moved as West Indies draw

That added another 184 balls to his match tally of 673, the most ever faced by a Caribbean cricketer. The timing of Root’s declaration may invite some discussion given it was slightly less ambitious than the equation he set up unsuccessfully in the first Test, when he dangled 286 in 71 overs, but even an extra half-hour may not have been enough to break down the wall.

The West Indies had occupied 187.5 overs in the first innings and despite a couple of awkward moments, they retained their focus. Jack Leach had looked the likeliest match-winner, finishing with three for 36, and would have been forgiven for skipping the end-of-match handshakes after getting through a mammoth 94.5 overs over the five days.

Saqib Mahmood also left a strong first impression on debut with a hostile spell that accounted for Shamarh Brooks and Nkrumah Bonner for single-figure scores. In the end, an outside sniff of victory simply required more than England had.

Rain intervened three times in the morning session as they looked to top up their total and make the game safe, adding 145 in 24.5 overs. It was a selfless operation that cost them six wickets as they embraced the risk that comes with rapid scoring.

Dan Lawrence was most successful, top-scoring with 41 in 39 balls as he continued playing with the raw confidence that has seen his stock rise sharply on this trip. Root could probably have pulled the plug at 250 ahead but ended up playing through to the interval.

Despite the delay, England almost got a dream start with the ball as Brathwaite fended away the first delivery of the innings from Chris Woakes, close but not quite close enough to the short-leg catcher.

Instead, they had to settle for the lower value scalp of John Campbell to get things moving. Leach was the bowler, entering the attack after just 15 minutes, with DRS picking up a hint of glove on the way through to Alex Lees under the helmet.

Saqib then put some real wind in England’s sails with an eye-catching burst that saw him generate good pace and carry as well as movement off the seam.

Brooks succumbed first, slashing to Zak Crawley who juggled the ball twice but gave it enough air for Root to swoop in and gather. The England skipper took the next chance cleanly at first slip, Saqib clipping the shoulder of Bonner’s bat with a ripper.

At 39 for three, the unlikely mission appeared to be on but Brathwaite and his fellow first-innings centurion Jermaine Blackwood shut things down.

At tea the score was 65 for three – exactly the same score at exactly same point as the previous match.

The fourth-wicket pair put on 50 in 150 balls either side of the interval, with Root leaning on Lawrence’s unorthodox brand of off-spin and Leach’s more conventional style and keeping his seamers in reserve. With runs an irrelevance and close catchers crowding the bat there was one more twist in the tale.

Bairstow had been stationed at a strikingly short gully, settling on his knees with a helmet for protection, and took the catch when Leach found Blackwood’s outside edge.

Jason Holder’s arrival at number six brought back more memories of Antigua, where he helped shut down the game. But he was unable to repeat the effort here, using up just 24 deliveries before threading a loose stroke towards cover. With Lawrence throwing himself into action for a sharp catch, Leach had a third.

With light fading in the final hour, England had missed their chance for another burst of pace and Brathwaite found an able partner in Josh Da Silva. Leach got a few to spin sharply but Brathwaite made sure to reach the end of the line.