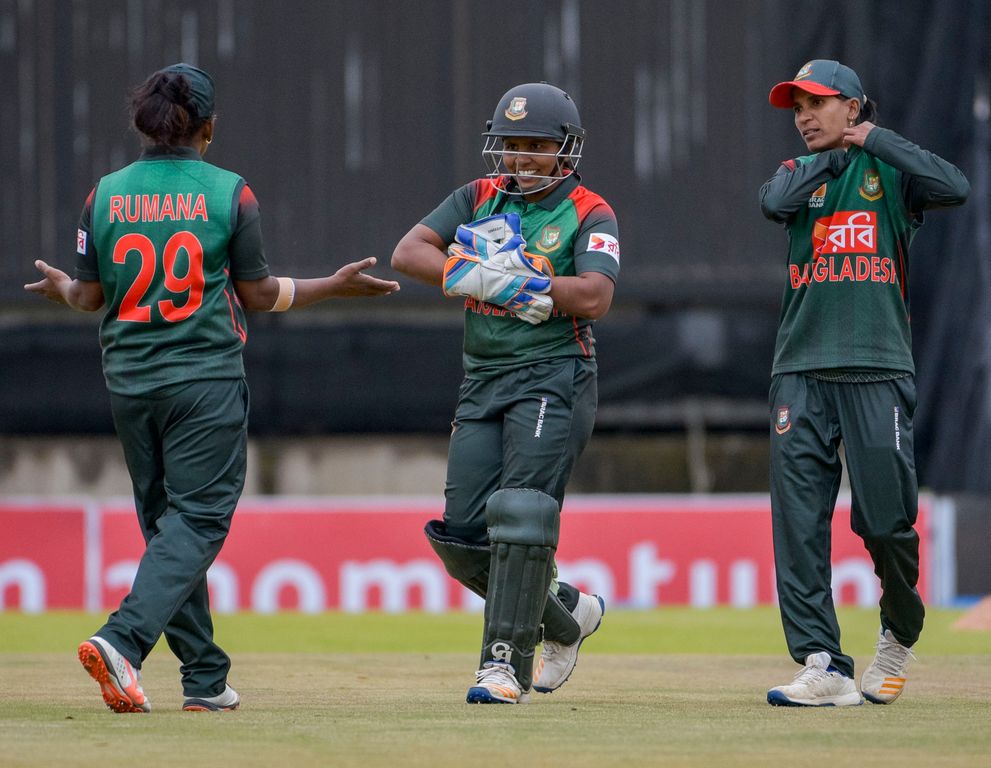 Having won their opener against Thailand, Pakistan succumbed to a seven-wicket loss against Bangladesh in their second Women’s T20 Asia Cup match in Malaysia on Monday.

Put in to bat, Pakistan were restricted to just 95/5, in itself largely thanks to Sana Mir’s 23-ball 21 late in the innings. Bangladesh chased down the target in 17.5 overs.

Pakistan got off to a decent start, with Nahida Khan (13) and Muneeba Ali (7) putting on 22 within five overs. But two quick wickets in the fifth over, sent down by Nahida Akter, the left-arm spinner, derailed them. Akter was the pick among the bowlers, ending with 2/23.

Bismah Maroof and Javeria Khan put on a steady 28 thereafter, taking the total to the 50-run mark, but leg-spinner Fahima Khatun broke the stand in the 11th over with the scalp of Maroof (11).

Khan fell in the next over after a 27-ball 18, Salma Khatun getting the big wicket, and when Kainat Imtiaz followed suit in the 14th over, Pakistan were 57/5.

Nida Dar and Mir then stayed clear of risks, and added 38 unbroken runs for the sixth wicket to boost the total closer to the 100-mark. It was far from sufficient.

With time to build, Bangladesh were assured in their chase, despite losing Ayasha Rahman and Fargana Hoque with just 25 on board. Shamima Sultana sealed up one end in a 33-ball 31, and Nigar Sultana offered company at the other.

Pakistan next play Sri Lanka, while Bangladesh take on India.

India ease to victory over Thailand

Another strong all-round performance took India to their second win in as many days – a 66-run drubbing of Thailand – in the Women’s T20 Asia Cup being played in Malaysia.

Thailand’s chase never really took off, the 31-run stand for the second wicket between Naruemol Chaiwai and Nattaya Boochatham the best phase in their innings, which ended at 66/8.

Unfortunately for Thailand, who had lost their opening game by eight wickets to Pakistan, Chaiwai and Boochatham brought runs but also ate up balls -Chaiwai’s 14 runs coming off 28 balls and the 21 Boochatham scored taking 40 balls.

Chanida Sutthiruang, the No.7 batter who scored a 16-ball 12, was the only other Thailand player to reach double-figures as Kaur followed up her quick runs with a spell of 3-0-11-3 to earn the Player of the Match award.

Earlier, Meshram struck two fours in her handy effort from the top of the order even though it was a slow innings considering the format, but all of Mandhana, Patil, Kaur and Vastrakar, who slammed a boundary in her two-ball innings, scored at over a run a ball.

For Thailand, Wongpaka Liengprasert, the off-spinner, was the best of the lot in a good bowling performance, returning 2/16.

India next play Bangladesh, while Thailand go up against Malaysia in the third day of action on Wednesday.

Mendis and Nipuni Hansika, the openers, scored 59 runs in under 10 overs to give Sri Lanka a great start after they were asked to bat.

Mendis, the more aggressive partner, fell to Sasha Azmi, the best of the Malaysian bowlers, in the 10th over for a 29-ball 36, with four fours and a six, and Hansika went back soon after, run out for a 37-ball 20.

That left Sri Lanka at 66/2 in 11.4 overs, but Anushka Sanjeewani and Perera kept the momentum in Sri Lanka’s favour with 46-run partnership for the third wicket.

Sanjeewani was dismissed with nine balls left in the innings, but only after her 26 in 25 balls had put Sri Lanka in sight of a good score. That came up on cue as Perera opened up, hitting Winifried Duraisingam for fours off each of the last three deliveries of the innings.

Perera ended on a 27-ball 32*, and Duraisingam ended with unflattering figures of none for 39 from her four overs. Sri Lanka finished on 136/3 and then made it two in two matches after their win over Bangladesh on the opening day when they kept the Malaysians to 46/7 in their 20 overs.

It was always going to be a steep ask for the Malaysia batters, and they never managed to give any impetus to their innings.

Oshadi Ranasinghe sent back Yusrina Yaakop in the second over, and though it took till the eighth over for de Silva to pick up her first wicket, that of Duraisingam, Malaysia had only progressed to 14 at that stage.

Christina Baret fought hard with 14 runs, scored off 32 balls, but Mahirah Izzati Ismail (10) was the only other batter to reach double-figures, and with the innings scoring rate never crossing three an over, the game was over well before the final ball was bowled.

De Silva followed up with the wickets of Mas Elysa and Baret, and Shashikala Siriwardene also picked up two wickets to keep Malaysia under the pump.