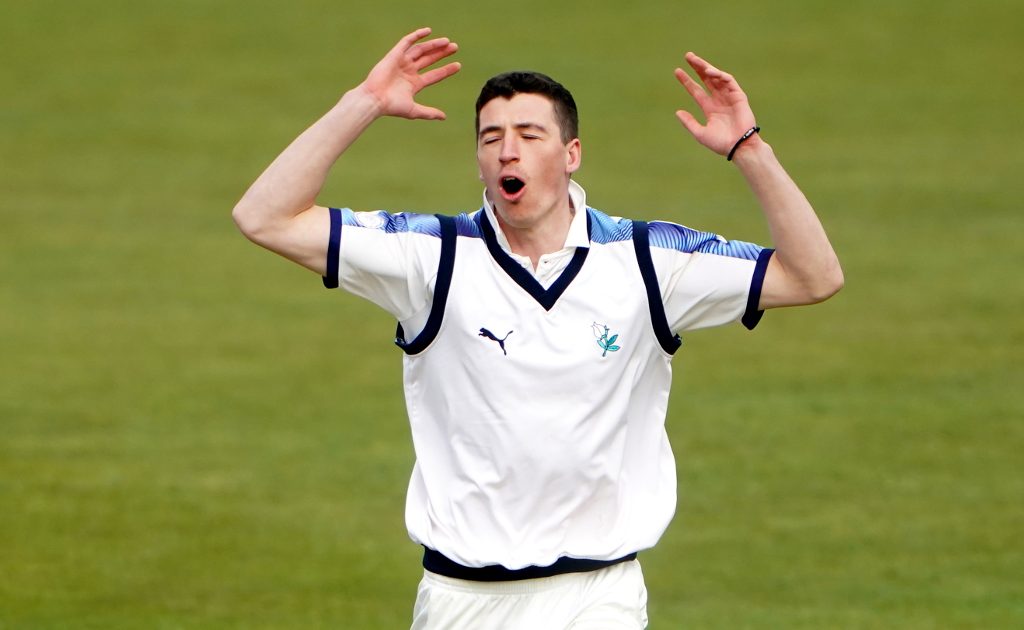 England bowler Matthew Fisher says he and his Yorkshire team-mates are ready to embrace their responsibilities as “role models” as the club attempt to move from crisis back to cricket.

After six months of damaging historic revelations and behind-the-scenes turmoil initiated by Azeem Rafiq’s whistleblowing account of racial harassment and bullying at Headingley, some semblance of normality will resume when they open their LV= Insurance County Championship season at Gloucestershire on Thursday.

All eyes will be on the White Rose as a new era led by the likes of Lord Kamlesh Patel, Darren Gough and Ottis Gibson takes its next big step and Fisher accepts there will be an increased level of scrutiny.

But, fresh from winning his maiden Test cap in the West Indies, the 24-year-old seamer is prepared to lead the way as well as the attack.

“Will there be extra eyes on us? Potentially. Is it deserved? Maybe, yeah. But I just hope we can focus on being good role models on and off the pitch,” he told the PA news agency.

“Everyone in the sport, with what’s gone on, has a responsibility now to grow the game and make it a game for everyone. The group we have at Yorkshire now is together on that and wants to do that. I feel in very recent past it has been like that.

“You’re not just a pro cricketer. We play this game because we love it and the more people can enjoy it, the better.”

Fisher has been tipped as a potential England star since he made his White Rose debut as a 15-year-old prodigy in 2013 and finally earned his cap in Barbados last month.

He enjoyed a dream start, taking the wicket of John Campbell with his second delivery in international cricket, but has no illusions about having made it after finishing with match figures of one for 71 on a dead pitch.

The York-born quick has had a glimpse of what it takes and knows his county performances will determine what happens next.

“I was chatting to Zak Crawley and he said to me ‘You think that you want this before you play for England, but once you do you’ll want it so much more’. That summed it up perfectly,” said Fisher.

“Even two or three days after the Test I was thinking ‘How can I get physically stronger, how can I bowl better’. I’ve already had meetings with the bowling coach Jon Lewis about using the crease more. I remember learning so many things in my first-class debut and it’s the same with my first Test.

“I learn fast and I give myself the best chance with the way I eat and drink, I do the right things. I just need to play, to get experience and learn. I’m up to 22 first-class games now but I can’t wait for it to be 50 and see how much better I am then.

“I’m hoping that I’m a better bowler for this experience, from bowling at Test players for a month. There are times in the nets when you think you’re bowling at 70mph because of how they play you.

“They can make you feel really slow then you start to get a few plays and misses, bowl a couple out, get them lbw. Hopefully I’ve stepped up a notch. Now it’s about winning games for Yorkshire, because that’s the thing that will see me getting picked.”

Fisher’s chances of a call for the first Test of the summer, against New Zealand on June 2, also depend on whether or not England choose to recall James Anderson and Stuart Broad. The record-breaking veterans were controversially overlooked in the Caribbean in a nod to future-proofing the side, but both harbour hopes of regaining their spot.

“That would be fair enough. I always said I’m not ‘replacing’ them. Even to compare is a disrespect to them.

“If Jimmy Anderson is the complete bowler, and I’d say he is, it’s about how close I can get to that over the course of my career. I’m not going to be there at 24, of course I’m not.