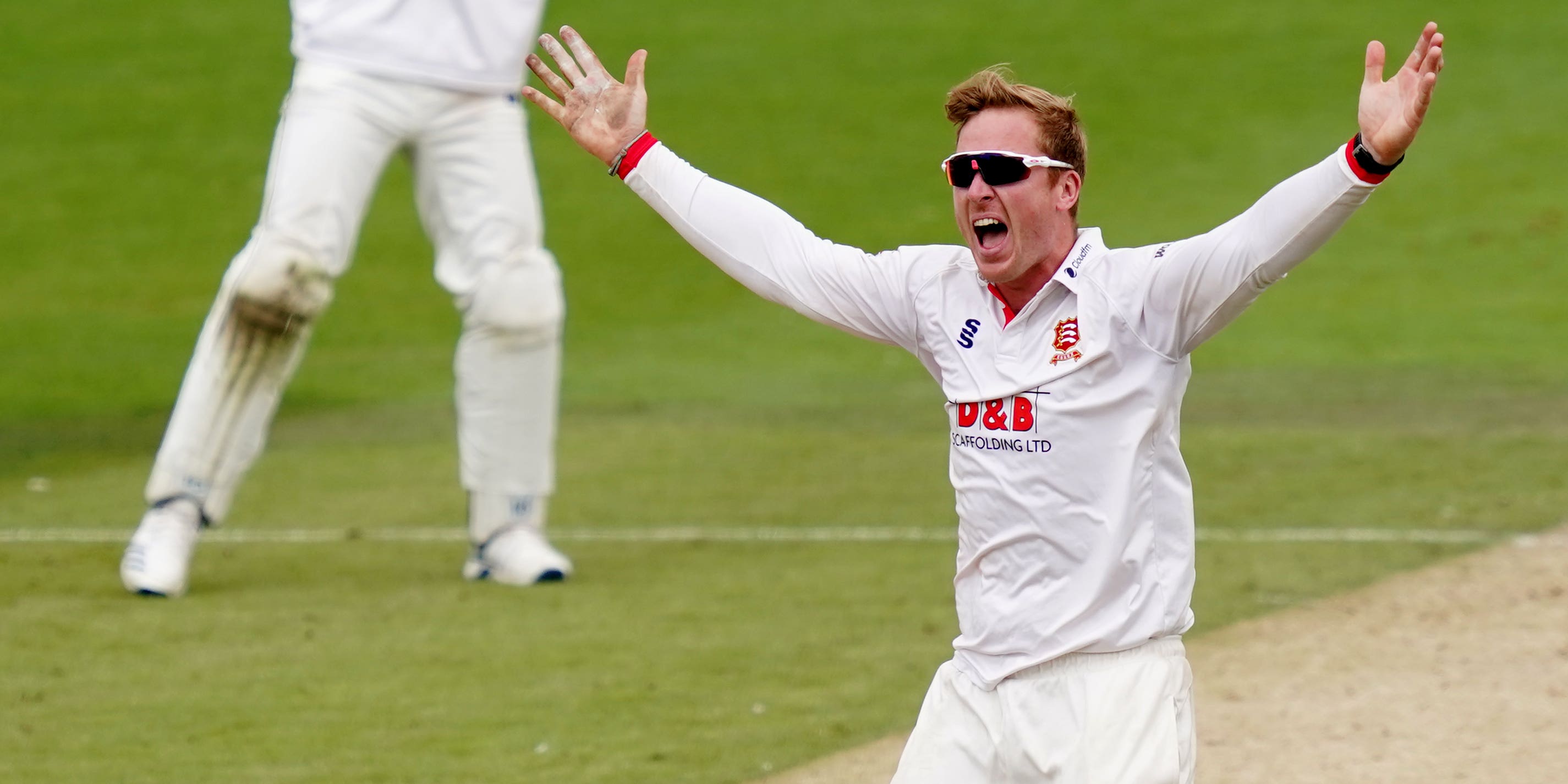 Simon Harmer picked up five wickets in a dominant Essex bowling display as they skittled Gloucestershire out for 136 on day one of their LV= County Championship match at Chelmsford.

The South African finished with figures of five for 44 with Graeme Van Buuren top scoring for the visitors with 36, Jamie Porter chipped in with a couple of wickets while Aaron Beard and Matt Critchley also claimed one each.

Essex also laid down the gauntlet with the bat after the innings break as Sir Alastair Cook and Tom Westley took them to a score of 127 for the loss of just one wicket at the close. Cook posted an unbeaten 61, including nine fours and Westley reached his half century to put them in a comfortable position heading into day two.

Somerset’s Lewis Goldsworthy notched a debut first-class hundred to help his side to a score of 297 for five at the close of day one against Lancashire at the Trafalgar Road Ground.

Goldsworthy walked to the crease with the West Country outfit on 77 for three and after Tom Lammonby departed, he was able to form a 145-run partnership with 18-year-old and fellow debutant James Rew to put ninth-placed Somerset in a healthy position going into the second day against the high flying Lancs side.

Tom Alsop helped himself to a century as Sussex finished day one on 407 for four against Leicestershire.

The 26-year-old finished on 150 before he was caught by Callum Parkinson off the bowling of Colin Ackermann but some bad news also came for the home side after captain Tom Haines retired injured after sustaining a fracture of a bone in his left hand which will keep him out for the next six weeks.

Durham’s Chris Rushworth was in fine form on the day of his 36th birthday after he picked up seven wickets on day one of their Division Two clash with Derbyshire.

Rushworth finished with figures of seven for 44 but a century not out effort from Leus Du Plooy (122*) and Anuj Dal, who fell 10 runs short of a ton of his own, took Derbyshire to a respectable total of 283.

Durham finished the day with the bat and stuck a couple of runs on the board from just one over before close of play was signalled.

Brett Hutton claimed four wickets for Nottinghamshire as they bowled Glamorgan out for 318 on day one at Sophia Gardens.

On a day where batters seemed to find a way to get themselves out after being set, only Sam Northeast managed to climb past the 50 mark but they still breached the 300-mark as Nottinghamshire saw out the remaining nine overs of the day and will start the second day on 19 for the loss of no wickets.

After an opening stand of 63, Warwickshire collapsed to 217 all out against Hampshire as Kyle Abbott stood out for the bowling side with a five-for.

Far from his usual style, Dom Sibley crashed a 56-ball fifty as Warwickshire started strong but the only other notable contributor came in the middle order as Nathan McAndrew made 63 before being caught by Ian Holland, bowled by Abbott.

Hampshire’s reply was far from an easy ride as they also finished the day on 42 for three on a day mostly dominated by the bowlers.

Yorkshire’s Adam Lyth notched his second County Championship century alongside a Jonny Tattersall maiden ton as Yorkshire strolled to 364 for five against Surrey.

Surrey will have work to do as the pair go into day two still unbeaten with Lyth on 152 off 265 balls while Tattersall clocked up 104 from 218.

The visitors Surrey were well placed when Matthew Waite was dismissed with Yorkshire on 125 for five but a 239 run partnership between Lyth and Tattersall swung the advantage in Yorkshire’s favour.

Middlesex were bowled out for 188 and most of the running was made from Tom Helm who made an unbeaten 50 while Luke Hollman made 62 as 15 wickets tumbled on day one against Worcestershire.

Worcestershire would have been happy with their efforts but the batting was far from great after they tumbled to 49 for five before Ed Barnard (33*) and Gareth Roderick (18*) steadied the ship somewhat with an unbeaten partnership of 51 to finish the day.

Emilio Gay slapped a century on Northamptonshire’s way to 303 all out against Kent at the Spitfire Ground.

The visitors endured a collapse after the visitors lost Ricardo Vasconcelos with the first ball of the day and Ryan Rickelton but having reached 205 for two, they lost their next eight wickets for 98 runs.