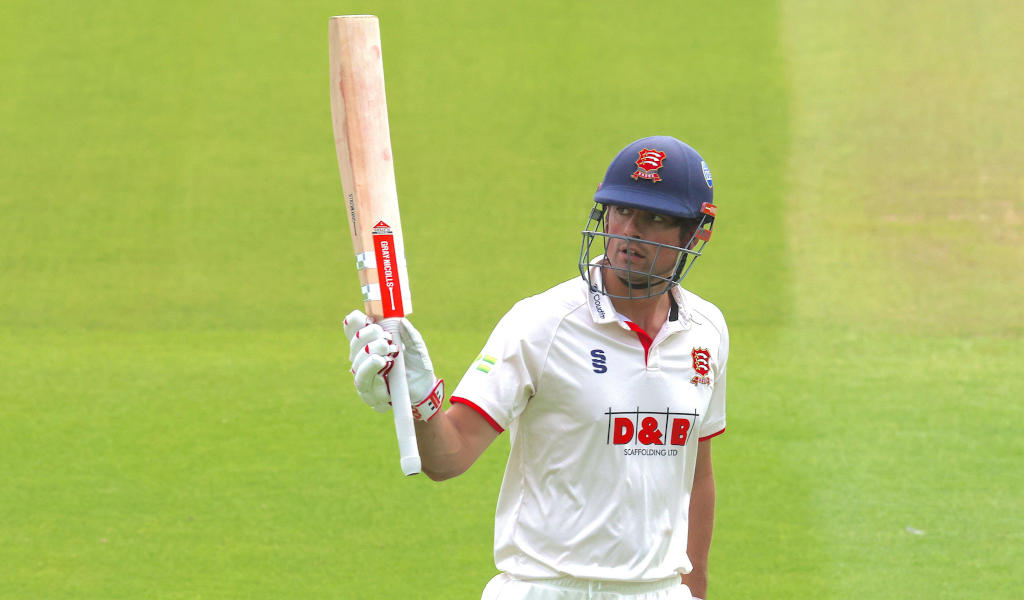 Sir Alastair Cook showed his unquenchable thirst for runs remains after he scored a hundred for Essex on the opening day of the new LV= Insurance County Championship season.

Cook shared an opening stand of 220 with fellow centurion Nick Browne to help the hosts get off to a canter against Kent in Chelmsford.

After being crowned the best red-ball team in the country in three of the last five years, Essex signalled their intentions on day one with Browne the first to bring up three figures before he was out for 107 to become one of two scalps for Jackson Bird.

Ex-England captain Cook, who signed a new two-year deal in November, was caught for exactly 100 as last season’s Division Two champions finished on 272 for four against Kent, who clinched the Division Three title but, like their rivals from across the River Thames, have loftier ambitions this time around.

Warwickshire are the team to beat following their County Championship and Bob Willis Trophy double last season, but they were only able to pick up one bowling point at Edgbaston against Surrey.

Visiting captain Rory Burns made a solid 41 on his first competitive innings since the Ashes but was overshadowed by Ryan Patel’s 75 which included two maximums.

Ollie Pope continued his excellent domestic form with an almost run-a-ball 40 before rain saw his innings halted with Surrey on 168 for three after Oliver Hannon-Dalby’s two-fer.

James Hildreth’s 87 was the lone highlight for Somerset after they were dismissed for 180 at the Ageas Bowl.

Mohammad Abbas claimed two wickets for Hampshire, but it was Keith Barker who had the pick of the figures with three for 33.

Home openers Joe Weatherley and Ian Holland put to bed any talk of a tricky wicket with an unbeaten century stand with the former finishing not out on 65.

Wickets tumbled in Northamptonshire but England hopeful James Bracey showed his class to lead Gloucestershire to 164 for eight at the close.

Bracey, who came in at three and saw the visitors collapse to 42 for four and 103 for seven, helped his side rebuild with an unbeaten half-century but Ben Sanderson’s four scalps has the home team firmly on top.

In Division Two, Middlesex’s Stephen Eskinazi had the honour of being the first batter to reach three figures in the County Championship this season.

Eskinazi struck 16 fours in his 216-ball innings of 118 to help his side into a position of strength at Lord’s with Joshua De Caires – the son of former England captain Michael Atherton – hitting 80.

Sri Lankan Suranga Lakmal was the best of Derbyshire’s bowlers but they lost emergency loan signing Ryan Sidebottom to injury after just seven balls with Middlesex able to make 307 for four.

Just 47 overs were possible at Sophia Gardens where Glamorgan made 164 for four thanks to Colin Ingram’s unbeaten 71.

Stuart Broad was another notable absentee in the second tier for Nottinghamshire, who could only restrict Sussex to 302 for six at Hove.

After openers Ali Orr and Tom Haines made half-centuries, Tom Clark picked up the baton and finished not out on 82 despite the best efforts of Liam Patterson-White on his way to three for 69 off 34 overs.

Rain contributed towards a day to forget for Azhar Ali on his Worcestershire debut against Leicestershire.

The Pakistan batter made only two before he was run out having waited until the evening session for his chance to bat.

Chris Wright’s three-wicket haul inflicted further damage but Worcestershire did regroup to close on 118 for four.