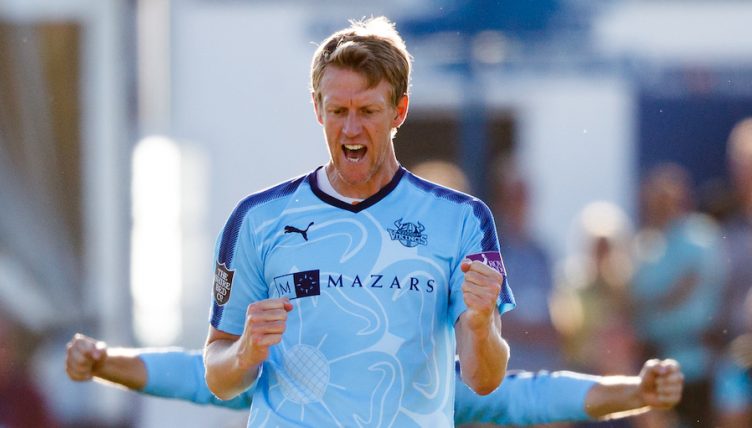 Club captain Steven Patterson has hailed the impact of winter signing Duanne Olivier as he prepares for his first season in English cricket with Yorkshire.

Olivier signed a deal with the White Rose back in February which, due to the length of the contract, means he is no longer eligible to represent South Africa.

He becomes the latest Kolpak player to give up their career with the Proteas in search of pastures new, following the likes of Jacques Rudolph, Kyle Abbott and Heino Kuhn.

“I think he’ll bring a lot to us, to be honest,” Patterson told Oli at the Yorkshire media day. “Obviously, if you’re talking purely cricketing performance then we’ve seen what he can do this winter playing for South Africa.

“He got stacks of wickets, he’s obviously a very very high-quality bowler. We’ve seen that in the short time he’s been with us.

“But it’s not just that. Off the field he’s a great lad, he’s fitting in very well to our dressing room and I think the fact that we’ve got some really talented young bowlers in Jared Warner, Josh Shaw and Matthew Fisher who are ready to make that next step forward.

“Having somebody like Duane around for them to learn off will be really valuable.”

Patterson, who was named captain of Yorkshire in all formats in June last year, then provided an analysis of the squad at he and Andrew Gale’s disposal in 2019, insisting attitude is the key to success.

“I think for me first and foremost the attitude and the environment in the dressing room is key to us being successful.

“With the amount of ability and talent in the squad, I’m not worried about that, if we get our attitude right like we have done so far and we can carry that through into the season, we’ll be in a really strong place.

“I’m really excited to see both Tom Kohler-Cadmore and Harry Brook kick on this year. Harry played all of last year and did well at times, but more important learnt a lot about first-team cricket.

“Tom had to wait a little bit in Championship cricket to get his opportunity, but when he did he showed us really how good he is, and obviously in white ball cricket his performances have been outstanding.

“The two of them [Brook and Kohler-Cadmore] I’m really excited to see how they get on.

“Jonny Tattersall came in last year and obviously started keeping part-way through the season and really then ran with it, but he’s had the winter to get his head around the fact that it’s his role, it’s his spot and I think we’ll see him kick on and be even more successful.”

BREAKING: Yorkshire seam bowler Steven Patterson will continue as Club captain after today being appointed to the role on a full-time basis across all three formats.#YourYorkshire

“I’d like to see how Matthew Waite gets on this year. He’s had a really positive winter, he played a bit last year and I’d like to think he can kick on and have a really successful season.”

With no white ball trophy since 2002, this ever-expectant fanbase knows that success in limited overs cricket is key, but Patterson is very much a traditionalist when it comes to silverware.

“I’m a traditionalist like most, I’d take the County Championship over anything. For me, that’s the Holy Grail – that’s what I grew up believing and what I still believe now.

“At the end of the day you can’t be picky though, I’d take silverware in any competition. It would be fantastic for me having played in a number of semi-finals in 50-over cricket to go one step further and get to the final of that.

“And then again in T20, we’ve had two finals days in my career and one final. I feel like we need to go one better.

“I’m not picky, I’d snap your hand off for any silverware, but the Championship would be the ultimate goal for me.”

With the sun beaming down on the new North/South Rugby Stand, Steve ended by reflecting on what a great place to play cricket Headingley is.

“Obviously we knew and the club knew that to continue attracting international cricket, and with this new competition the 100-ball starting next year, we have to give people the best experience we can.

“I don’t think there’s many stands in world cricket that you’ll see that are much better than that. It’s really made the ground something special; get that full for a Lancashire game and it’ll be a hell of an experience.”