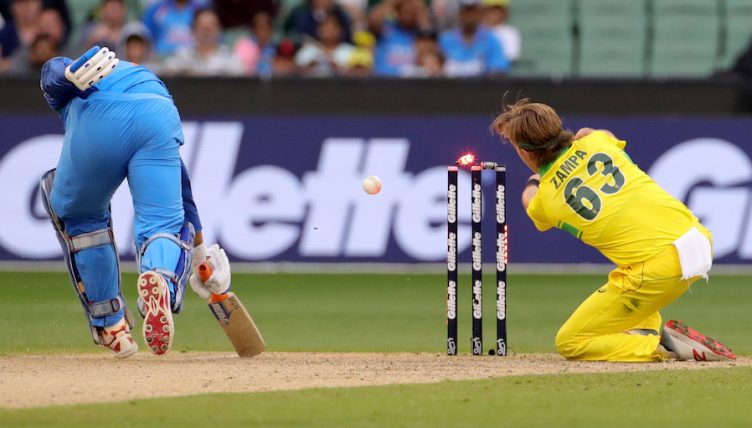 Cricket is one of those sports where even the most routine elements of the game can be made to look ridiculously difficult.

Some might say it’s down to the effect of pressure, others might say that even professionals are prone to mental lapses, while some of the run-outs on the list below quite frankly don’t deserve an excuse.

We kick off the list with a piece of absolute genius from Pakistan. Generally, if the ball is crawling towards the boundary rope, it’s best to check that it … you know … actually reaches the boundary?

Apparently that’s not as fashionable as casually standing in the middle chatting to the non-striker. Fair play to Mitchell Starc for being switched on enough to ping this ball back in, though.

Shikhar, mate, what are you doing?! He gets caught in no-man’s land the for the first attempt from Sanju Samson behind the stumps, but then makes absolutely no effort to get back when James Faulkner has another shy, and then assumed he’s safe when that misses.

Samson has other ideas though, and it’s third time lucky with the throw as Dhawan receives his marching orders. No sympathy here, at all.

Lance Klusener looked like he had guided South Africa to the 1999 Cricket World Cup final with yet another superb cameo after an already impressive tournament. One to win and four balls to do it, just keep your calm lads…

For what it’s worth, Allan Donald has a lot to answer for here. The call was to run and he stayed put, only setting off when it was way too late, sparking remarkable scenes. That’s what pressure does.

There is simply so much to digest here. From the luck (or bad luck) of the ricochet onto Adam Zampa’s nose, to the concern from Peter Nevill trying to distract people from the fact that, 40 seconds later, everyone realised he was out.

It’s probably the least Zampa deserved for a bloody nose, to be honest…

We did warn you there would be some 240p videos included…

Hopefully you can just about see what goes on here, as Misbah-ul-Haq thinks that jumping is the best way to protect himself from a Dinesh Karthik throw. In the end, it costs him his wicket. Just ground your bat, Misbah.

This one is actually remarkably similar to the last one, but just looks a lot weirder. Alastair Cook had never been run out in international cricket before this, but what an incredible way to break that duck.

With Cooky at the non-strikers end ten runs shy of a double century, Virat Kohli decides to have a pop at the stumps, and Cook raises his bat to let the ball through.

Our favourite bit of this video though has to be Nasser Hussain’s proclamation that “we’ve all done it”.

And another one from the book of non-strikers who are completely oblivious, this time from Virender Sehwag. The throw comes in from Kumar Sangakkara, which by the way is absolutely on the money, and he pays for his laziness.

Sorry Azhar, you make the list twice mate. There is simply no way that we could not include this. The fundamental basics of running between the wickets are completely ignored, and the result is an absolutely beautiful tragedy that unfolds before our very eyes.

A good throw, mind you…

Why not bring the list to a close with a pair of absolute corkers from Inzamam-ul-Haq. Inzi has the fantastic title of batsman with the most run-outs in international cricket with 38, and you can see why here.

The first one is for obstruction, but honestly it’s an absolute textbook back-foot defensive shot from the big man. Shame it blocks Suresh Raina’s throw and he’s about three yards out of his crease.

There’s arguably even more confusion in the second clip when Inzi decides to leave a Steve Harmison throw, again straight from the textbook. The real beauty though is that the Pakistan great has admitted on multiple occasions that he is confused by how run-outs work.