Home Features Ravi Jadeja: The substitute that is always on the field

Ravi Jadeja: The substitute that is always on the field 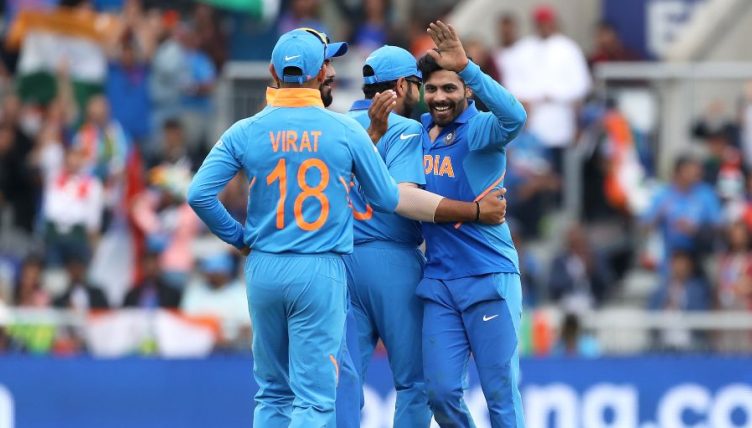 This is turning into a Monty Python sketch.

India’s World Cup will be remembered for four things – Kohli’s face, Sharma’s hundreds and Bumrah’s bowling but most importantly (because it’s the focus of this article) the fielding of Jadeja.

It’s been impossible to watch a World Cup game involving India without Jaddu’s’ fielding being mentioned at least three times – and with good reason. He is outstanding. According to CricViz he saved 41 runs in the tournament, the highest by some margin. And technically he only played two games…

Two balls in the latter overs of New Zealand’s innings in the semi-final proved his worth. A ball tapped into the legside and an easy two to anyone but Jadeja – a sprint to the ball; a one-handed pickup and deadeye throw to hit one stump from 40 yards away. Next ball a catch high above his head before taking a knee a few inches from the boundary and the jubilant Indian fans. Ross Taylor and Tom Latham were Jadeja’d.

There is another side to this. He’s a very capable all-rounder – again proved by his performance against New Zealand, but is for some reason not considered good enough to be consistently included in the Indian side. He was only selected for two of the eleven World Cup games so far. So how did he save so many runs when he’s only been in the playing eleven twice?

The answer stems from an astounding ability for the Indian batsmen to pick up any number of minor ailments to allow Jadeja to take their place in the field – a slight bruise for Karthik or a tummy ache for Sharma. Despite only being selected for two of the games he fielded for the vast majority of India’s bowling efforts.

It’s easy to imagine Kohli at the break in innings – “Rohit are you sure you’re OK to field?” “Yes, skip I’m fine.” “No no are you really sure?” Jadeja fully kitted up doing jumping jacks next to his captain.

India have made a mockery of the idea of a playing eleven. They have eleven batsmen and bowlers and one Jadeja – their specialist fielder. Why not go the whole hog and have special teams like they do in American sports? Bring on the bucket handed slip catchers for the first ten and the whippets in the outfield after that.

Just ask Ricky Ponting how he feels about sub-fielders, or Gary Pratt, who is presumably still regaling anyone that will listen of the day he ran the Australian captain out in 2005 and went down in the annals of Ashes history.

Maybe the ICC should make a ruling where the sub-fielder has got to be worse than the worst fielder on the field. It would certainly deter Sri Lanka from making a change – they’d have to roll someone with a beer gut more significant than Malinga’s on to the pitch. Or for the West Indies – it’s hard to imagine someone more sedate than Chris Gayle coming out to field.

Jadeja is one of very few box office fielders in World Cricket and one that seemingly doesn’t technically need to be playing for people to enjoy. ‘Caught (sub)’ or ‘run out (sub)’ is often an unusual quirk in the scorebook but not so for an Indian bowling effort – because that sub is Ravi Jadeja and he’s always on the field.