Home Dan Liebke Why Cricket is the Greatest Sport No. 5: Rain

Why Cricket is the Greatest Sport No. 5: Rain 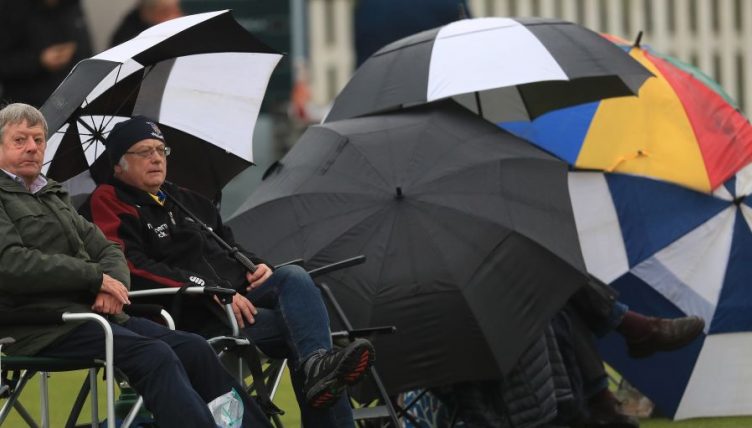 “Rain is grace; rain is the sky descending to the earth; without rain, there would be no life,” said American novelist, poet and founding Barmy Army member John Updike.

Cricket journalist and canonised saint, Basil of Caesarea similarly pointed out that “Many a man curses the rain that falls upon his head, and knows not that it brings abundance to drive away the hunger.”

But this trio of pluviophiles aren’t alone. At some point, cricket makes rain-lovers of us all.

At first glance, this seems improbable. After all, cricket is one of those relatively rare sports that abandons play as soon as precipitation rears its damp, mussed-up head. An absence of cricket being played would, on the surface, appear to be a negative for a fan of the game.

But in fact those delays caused by rain add yet another compelling element to the sport. This isn’t lunch, tea, drinks, change of innings or CEAT Tyres Strategic Timeout. No, a rain delay is bigger than any scheduled or match-enforced break, because the weather is unpredictable and out of our control. It’s a meteorological dice roll that can transform the match, opening up exciting new tactical options, all of which can, conveniently, be contemplated while we’re sitting around waiting for the rain to stop.

Cricket has always had rain-based tactics. In the Ancient Times, before pitches were covered, the arrival of rain could transform an otherwise normal batting pitch into an unplayable quagmire. This in turn would transform the Test into a battle of declarations, as canny captains strived to have ball in hand until the sticky wicket became hard again. (This is not as rude a sentence as it sounds.)

Sir Donald Bradman, the man for whom the phrase ‘you’re only as good as your last innings’ was invented, famously once reacted to the reversal of fortunes caused by the arrival of rain on an uncovered pitch by similarly reversing his batting order. This meant that the tailenders bore the worst of the pitch. More importantly, it allowed The Don to come in at seven and stake a claim on yet another batch of individual batting records. Because he was an insatiable glutton for such things.

But ignoring Bradman’s tendency to embarrass himself this way, that same era also finally saw the demise of the timeless Test. From that point on, Tests would always contain time. Which meant, more importantly, that time could always be removed from a Test.

And this is Test cricket as we know it today. Where a draw is always an option and, hence, rain can always unpredictably transform the game. (Or, if you’re Hansie Cronje, open up sweet leather jacket-acquiring opportunities.)

There are very few Tests where a perfectly-timed burst of rain wouldn’t make the match more strategically interesting. Rain gives the stronger team an extra challenge to manoeuvre around, and the weaker team a potential escape route.

Every Test cricket fan has at some point wished for rain to come and save their side. And when such a prayer is answered, there is a disproportionate degree of satisfaction in the outcome. An outplayed team salvaging a draw thanks to a deus ex precipita seems almost to be blessed by the Fates themselves. And deep down we all know it’s better to be lucky than to be competent at cricket.

Now so far, I’ve limited my thoughts to rain delays in Test cricket. This is because as any elite cricketer will tell you, Test rain delays are the ultimate form of rain delays. Limited over rain delays, be they ODI or T20, are relatively dull matters these days. And we have three men to blame for this: Frank Duckworth, Tony Lewis and professor-come-lately Steven Stern.

In a way, the Duckworth Lewis Stern methodology is almost too fair a system. For while there may be some quibbles with the exact magnitude of any given DLS target, overall there’s little doubt that it takes the match state prior to the rain and accurately reflects that state in the post-downpour revised target.

As such, all we’re left with is a time jump with no new tactical elements added to the game. Sure, maybe while it’s been raining we’ve been shown highlights from an old match, or watched a Classic Catches segment or listened to commentators fill time while waiting for the next radar update by selecting increasingly ludicrous squads for whatever ICC tournament looms next. So it’s not time wasted. But nothing fundamental about the game has been altered.

It wasn’t always this way. Prior to Duckworth and Lewis waving their mathematical sanity wands over the playing conditions, rain delays could cause all kinds of thrillingly mad and unfair outcomes.

The most famous, of course, is the 22 runs off one ball target adjustment from the 1992 World Cup semi-final between South Africa and England. This was blatantly silly, but in retrospect permissible, because it opened the door for South Africa’s wonderful running gag of exiting as many World Cups as possible by a combination of rain-adjusted targets (2003, 2015) and/or semi-finals (1999, 2007, 2015). And because they’re pros, those magnificently mental South Africans also added ties into the mix (1999, 2003). What a side. What a country!

But that’s fitting too. Because if rain delays aren’t a time for cricketing digressions then when is? The answer to that rhetorical question is: during any of the other play-delaying variants. Sadly, however, most of those tend to either end the day’s play (e.g. bad light) or are too brief to truly marinate in (excessive brightness, swarms of bees).

No, for proper, edge-of-your-seat cricketing delays, nothing satisfies quite like the tried and true prospect of rain. Simply stated, rain makes cricket better. To paraphrase jazz musician and former match referee Miles Davis, sometimes it’s not the cricket you play, it’s the cricket you don’t play.

Sublime aspects of cricket can take place in the specific absence of any cricket being played. And that suggests the kind of cosmic omnipresence that one usually associates only with gods, fundamental forces of Physics or superhero movies.

And that’s surely enough to justify yet another reason for why cricket is the greatest sport of them all.