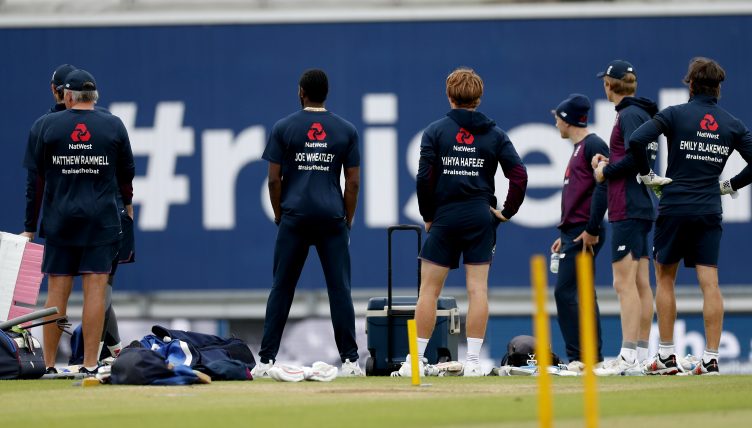 An NHS worker who has been working long night shifts caring for Covid-19 patients has spoken of his pride at seeing his name appear on England bowler James Anderson’s shirt.

England’s players and support staff wore the names of key workers on their training tops in the build-up to the opening game of the series against the West Indies on Wednesday morning, dubbed the #raisethebat Test.

Among them was Tom Field, a nurse practitioner who works night shifts at St George’s Hospital in south London, who said it was “quite surreal” when he learned his name would be appearing on the back of England’s leading Test wicket-taker.

“I didn’t really process it at first, it was very strange,” the 28-year-old told the PA news agency. “But as I’ve found out whose shirt I’m on the back of, and had a little bit of time to process it, honestly it’s amazing.

“It’s an honour, it’s great. And it’s so nice of the ECB to be recognising key workers as well.”

Like all the key workers involved – who include teachers, doctors, nurses, carers and other professions – Field is involved in cricket outside of work, and was nominated by his cricket club, Twickenham CC, where he plays and coaches.

England captain Ben Stokes said: “Wearing their names is a real honour for us, and is a small sign of our appreciation for the incredible work they have done.

“They have truly gone in to bat for us all, and it makes me proud of how the whole cricket family has responded to help us get through these unprecedented times.”

For Field, the occasion was doubly special as he got the opportunity to meet Anderson, via video call, on an appearance on BBC TV.

Like many NHS workers, Field has faced long, draining shifts caring for Covid-19 patients over the course of the pandemic.

He said the hardest aspects of his work have been learning to deal with the complicated and surprising symptoms of a virus that had never been seen before, and the emotional toll it has taken.

“We were at times having quite difficult conversations with people who…were dying, and they were quite aware of that,” he said. “That’s obviously quite hard to manage.”

Field, who is “a big England fan”, said the return of cricket to TV screens will “give so many people something to look forward to, which is massive for mental health”.

But he said he was particularly looking forward to getting back to playing, after the Government okayed the return of recreational cricket last week.

“It’s been one of the main constants for me in my life,” he said. “When I’ve had a rubbish week at work or we’ve had a pretty horrific set of cases that week, knowing I can go down on a Saturday and chat with my mates who aren’t necessarily in the job I do and play cricket and have a beer after the game is such a release.

“It’s the sort of thing that gets me through my weeks in the summer.

“To know that I can have that back and go and see some of my best mates again and play cricket again, it makes the weeks go a lot quicker.”