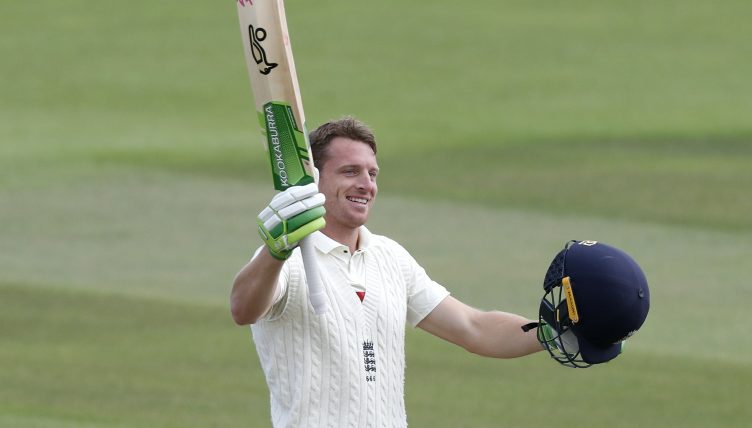 Jos Buttler ended a two-year wait for his second Test century as the huge fifth-wicket stand between him and Zak Crawley powered England to 373 for four on day two against Pakistan.

When a rain-affected first session ended at 2pm, Buttler had moved to a career-best 113 not out, with Crawley unbeaten on 186 as they took their game-changing partnership to 246.

Buttler’s fluent knock had played second fiddle to his younger team-mate on the first day at the Ageas Bowl, with Crawley posting a magnificent 171 not out, but the vice-captain took his turn in the spotlight as he converted his overnight 87 into a fine hundred.

Buttler did not have it easy, forced off the field on 91 by two separate rain delays, and was given caught behind off Mohammad Abbas on 99. Luckily he was able to call for DRS, with UltraEdge showing he had flicked his pad rather than the ball on the way through to the wicketkeeper.

Having survived that dicey moment he wasted no more time, punching the next ball for three between point and cover before taking the long-awaited acclaim of the home balcony.

Buttler had only scored one previous ton in his previous 81 innings at this level, making 106 against India in 2018, but has had an increasingly impressive summer with the bat.

Play began on time but the players were soon forced off by a passing shower, with England adding just four to their overnight total of 332. The ground staff worked quickly to get them back on but a second phase of just 10 minutes was possible before the rain returned.

The decision was made to push the interval back and things finally got moving when the teams came back at 1.15pm. Crawley finally got his first runs of the day from his 25th delivery, gratefully pinging a half-volley from Shaheen Afridi for four.

But all eyes were fixed on Buttler when he stroked Abbas for four to reach 99. Having survived his caught behind scare and ticked off his milestone at the very next attempt, Buttler looked a happy man as he led Crawley off the pitch.

Between them the pair had built England a formidable foundation as they look to press for a 2-0 series win.