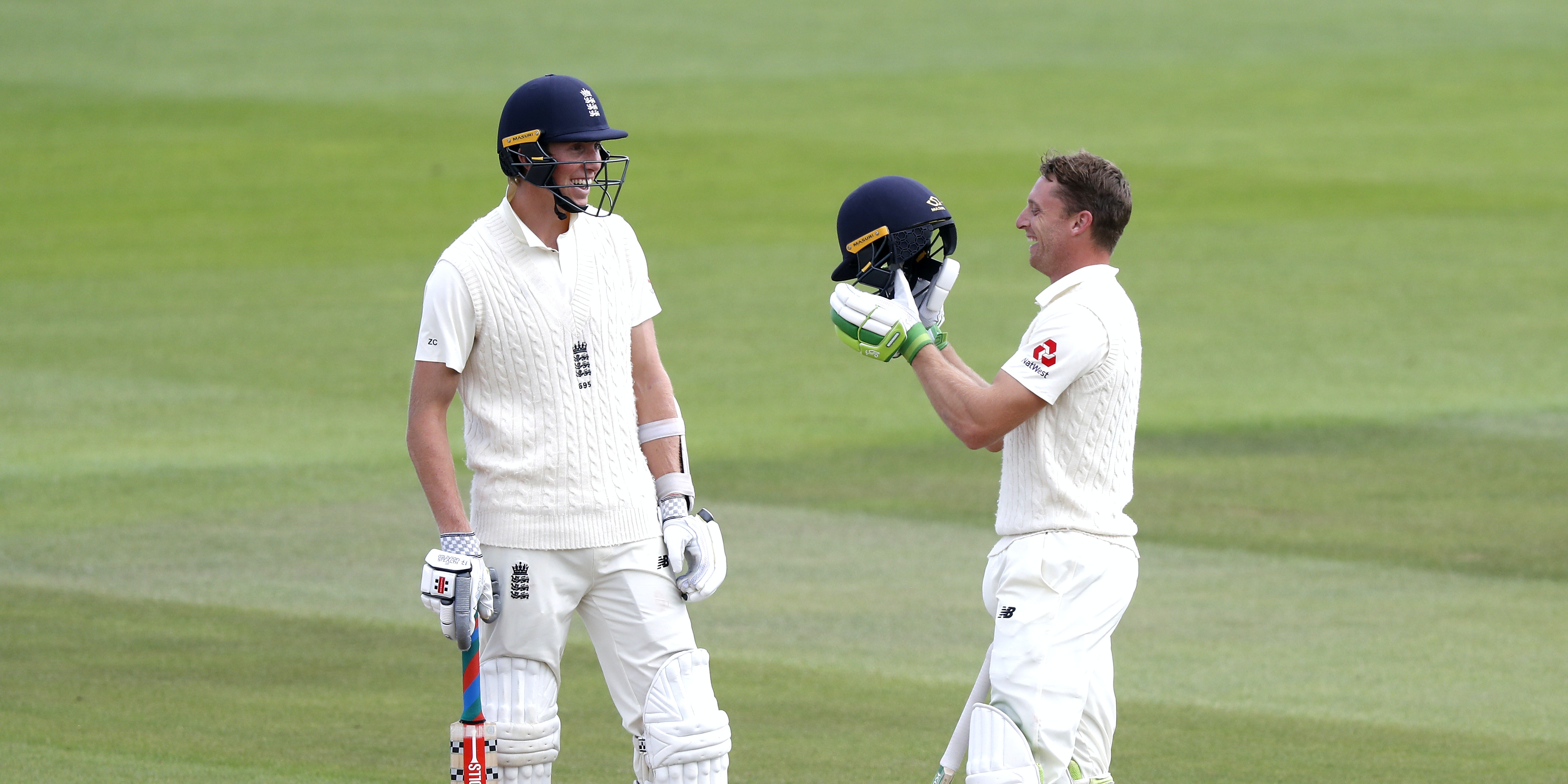 Zak Crawley produced a career-changing knock of 267 and Jos Buttler added 152 as the pair shared a record-breaking stand that all but guaranteed England a series win over Pakistan.

The duo came together on 127 for four on day one, with matters delicately poised and the hosts’ 1-0 lead somewhat precarious, and proceeded to pile on 359 before finally being parted deep in the second afternoon.

As well as being England’s highest ever fifth-wicket partnership, ousting Keith Fletcher and Tony Greig from the books after 47 years, it lies sixth on the all-time list for any wicket and powered the hosts to 583 for eight declared.

James Anderson then worked wonders with the new ball, taking out Shan Masood, Abid Ali and Babar Azam as the beleaguered tourists fell to 24 for three. The latter was the 38-year-old’s 596th Test, teeing up another historic landmark before the end of the match.

But for now the spotlight belongs to Crawley, who turned his overnight 171 into a true touchstone innings – the 10th best by an Englishman in Tests amid some truly elite company.

Having played so impressively to reach a maiden hundred he delivered handsomely again, adding another 96 in 124 balls to finish with 34 boundaries and a first ever six from a knock lasting well over nine hours.

Buttler, meanwhile, ended a wait of two years and 45 innings for his second Test hundred, occupying the crease for more than 300 balls for this first time in his career.

Both men fell in ill-fitting manner, Crawley stumped down leg charging part-timer Asad Shafiq and Buttler pushing a long-hop straight back to Fawad Alam, but their combined efforts will live long in the memory.

England began the day handsomely set at 332 for four and added 41 in an opening session that was twice interrupted by rain and dragged until 2pm.

Crawley needed 25 deliveries to score his first runs of the day via a welcome half-volley served up by Shaheen Afridi, but Buttler was more eager as he chased the 13 runs he needed to reach three figures.

He got to 99 before being given caught behind off the bowling of Mohammad Abbas, instantly signalling for DRS to come to his aid. Replays showed the bat flicking pad not ball as it passed into Mohammad Rizwan’s gloves and Buttler stroked the next ball past point to secure his long-awaited ton.

Crawley scored only 15 before lunch but it was a different matter in the afternoon session as he tapped the same inspired groove that had served him so well a day earlier.

Pakistan had bowled valiantly in the opening exchanges, beating the bat on several occasions, but as things progressed the tourists increasing looked like careworn passengers in the field. By the time it was all over Shaheen, Naseem Shah and and Yasir Shah had all conceded over 100, with the latter pair leaking more than four an over.

The stand topped 250 early in the afternoon, before Fletcher and Greig’s Mumbai stand of 254 in 1973 was eclipsed. Crawley grabbed a personal landmark next, turning his first hundred into a double.

He did so with a rare loose stroke, flashing hard outside off stump and seeing the ball sail wide of second slip. Having become his country’s third youngest double centurion, after Sir Len Hutton and David Gower, Crawley hammered his next 50 in just 41 balls.

He flogged Yasir through mid-wicket and when the spinner tried to tempt the drive, Crawley hoisted him in an arc over the long-off ropes. By now he was laying on a masterclass, driving hard and straight, drilling Naseem on the up, chipping Shan Masood over mid-off and finally stepping outside off stump to whip Abbas over midwicket.

He had eyes on 300 when he danced down to Shafiq, who dragged it down leg and saw Rizwan take a smart stumping. Crawley departed to fist bumps from the Pakistan fielders, walking into a new phase of his short career.

England would add another 97 runs before Root waved his men in, Buttler dropping anchor as he made certain to follow Crawley to 150 only to give away a brilliant knock when he popped a return catch back to Fawad.

The slow left-armer nicked a second when Chris Woakes (40) slashed to cover, with Dom Bess and Stuart Broad enjoying some late hits before Shaheen bowled the latter. The declaration left Pakistan 13 trying overs and Anderson cashed in.

He took out both openers – Masood was lbw to one that straightened off the pitch and Abid edging to third slip – before the prize scalp of Babar, leg before to the final delivery of a remarkable day.