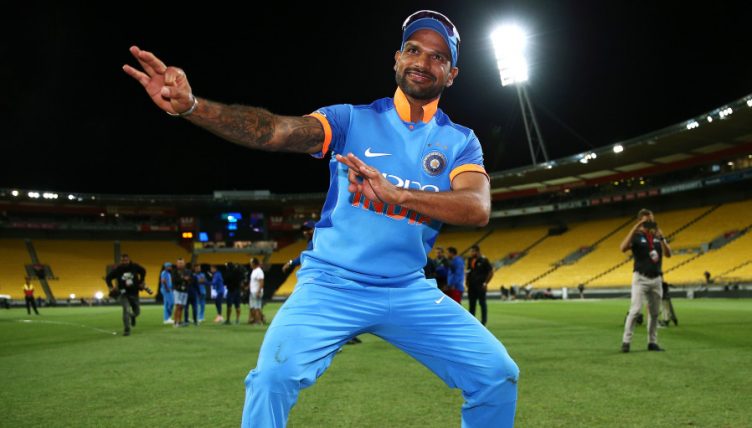 Cricket, above all else, is just a tremendous amount of fun.

Plenty of players have forgotten that, while plenty others might appear to be having fun but are on closer inspection nothing more than wacky Colin Hunt bores.

Shikhar Dhawan has fun. Even when he’s playing Tests in England and nicking off every 15th ball and then getting dropped and recalled seemingly at random, he still seems to be enjoying himself.

We’ve got so much time for that.

With Dhawan, of course, the most obvious expression of his enjoyment comes with the bat. He’s your classic carefree left-hander, all flowing drives and outside-off-stump-looseness and we wouldn’t have him any other way.

Imagine coming into India’s Test side to make your debut against Australia in place of Virender Actual Sehwag and then immediately scoring the fastest debut century ever. Just think for a second about the size of the pods you need for that.

The downside to such a ridiculous start is that the only way is down. Inevitably unable to replicate the fastest debut century of all time in every subsequent game – not least because they were no longer debuts – and, as discussed, physically incapable of scoring Test runs in England there is a sense that he hasn’t quite made it as a Test player. But after 34 Tests he’s still got an average north of 40 and knocks the bowling about at four an over. England would dearly love a failure like that at the top of their order.

But even if he is a Test failure (he isn’t) he’s a one-day star. While I’m painfully aware that asserting that anyone or anything is cool makes both you and them anything but, Dhawan is pretty cool. With his rakish facial hair and reckless approach to good length balls outside off stump. Cool guy.

S Dhawan has scored most runs of all India T20 intl batsmen losing away vs Australia after winning the toss https://t.co/E1yDCvgPH0

And this is manifested in his love for the Champions Trophy. Not for him the obvious, showy appeal of the World Cup. No, for Dhawan it’s the less loved, less obvious appeals of an eight-team event that exists under constant threat of the axe. Much cooler, and it’s no coincidence that the Champions Trophy, with its sane number of games and duration, is generally an infinitely more enjoyable affair than its shitty big brother.

All of this would be more than enough to get Dhawan a place on our list of heroes. But there’s one more component. One more thing that puts him right over the top, and there’s no higher praise than to say it’s a trait he shares with the GOAT, the greatest cricketer of all time, Stuart Broad. And it’s as simple as this: Shikhar Dhawan annoys Australians by doing exactly what Australians themselves do.

The background. India and Australia were playing the last of a seven-match ODI series. Rohit Sharma scored 209, good for him, but what Dhawan did was better.

Shane Watson was forced off the field after bowling five overs because of a hamstring injury. He later hobbled out to bat at number eight in obvious discomfort. He punched his first ball to cover where Dhawan fielded it and then immediately did a brutally unflattering impression of the struggling Watson.

Australia, the self-appointed arbiters of cricket’s moral code, were furious. Watson was not impressed at all.

But why had Dhawan done something so outrageous. Years later, Dhawan told Cricbuzz why he had decided to take the piss. “Watson bowled a ball which hit me in the ribs. It was hurting a lot and he asked if I was enjoying the pain. And I had to take it. So, when I came to field, I mimicked him, something he didn’t like.”

Obviously an Australian revelling in an opponent’s discomfort is different.

Well done for amusing yourself in a way that annoys Australians. But above all well done for enjoying the shit out of your dream job.