Home Dan Liebke Why Cricket is the Greatest Sport, No. 12: Batting Collapses

Why Cricket is the Greatest Sport, No. 12: Batting Collapses 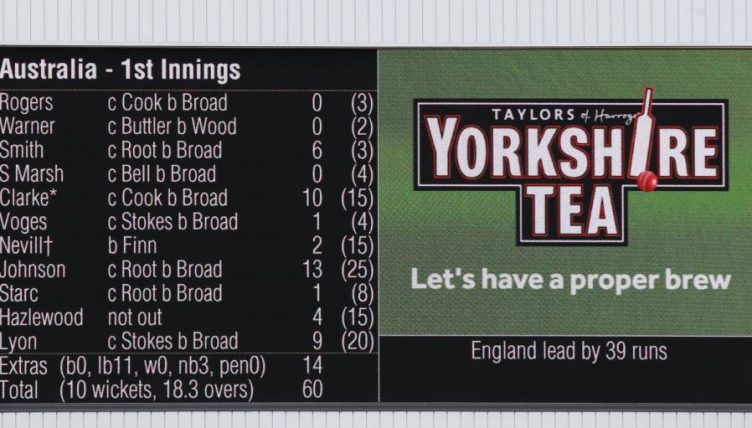 If you’re passingly familiar with Twitter and/or rating systems and/or dogs, then you’re probably aware of the WeRateDogs account.

As the handle suggests, it’s a Twitter feed consisting almost entirely of pictures of cute dogs, accompanied by a brief summary of the canine in question and a rating out of, yet invariably exceeding, ten.

Of course, being Twitter, it was only a matter of time before somebody took umbrage at this. The umbrage-thief in this case was a hero named Brant, whose sensible objection that ‘you give every dog 11s and 12s’ was countered with the illogical, but immediately memeworthy, explanation: ‘they’re good dogs Brent’.

Like all sensible people, I was on Bront’s side here. Such freewheeling disregard to the very foundations of maxima needs to be stamped out. Because if you start ignoring proper, rigidly defined boundaries to scoring systems, where does it end? (Answer: nowhere. It literally ends nowhere. An eternal stretch into the infinite is the inevitable mathematical outcome from the abandonment of a true upper limit.)

And then I remember batting collapses, and I discard all my logical principles.

Because there are multiple different kinds of batting collapses and, as far as I’m concerned, they’re all amazing, and each and every one of them deserves to score at least 11/10. Fidelity to mathematical axioms be damned.

The purest breed of batting collapse is the one that begins early and ends early. It’s the 47 or 51 or 58 or 60 or 67 all out, where nobody gets started and the batsmen just turnstile their way to and from the middle until the innings is finally put out of its misery.

A flawed team effort from top to tail, the perfection of the sub-100 total batting collapse is easy to understand. A century is considered an admirable, yet attainable, target for an individual. For an entire team to cumulatively fail to reach that goal is a display of such great disdain for the entire art of batting that it has to be admired. This kind of collapse is therefore the best in show of collapses – the ur-batting collapse against which all others are measured. 13/10.

But there are other kinds of batting collapses, of all shapes and sizes, and collapse-lovers all around the cricketing world take enormous delight in identifying and classifying the various types.

Consider, for example, the batting collapse that comes from nowhere. A team’s top order is moving comfortably along, establishing a half-decent total, allowing their fans to contemplate the prospect of the middle order building on the robust foundation, before perhaps some late hitting pushes the team innings into something truly massive.

And before the team knows it, they’re all out and those previous extrapolations that seemed so justifiable are instead recast as the height of foolish optimism. This is a standard schadenfreude breed of collapse and it’s one for lovers of subverted expectations everywhere. 11/10.

The reverse of this, where a team’s top order are swiftly herded away from the middle, back through the gates to the dressing room, is a good solid working-class collapse. A bit of top order folly that’s then saved by a late recovery brings together two of the key elements of what makes cricket the greatest sport – the prospect of early confusion due to Australians scoring the opposite to everybody else and then runs from tailenders. A rescued collapse is a special kind of collapse and nothing puts a smile on the face of cricket fans quite like a happily wagging tail. Who’s a good collapse, then? 12/10.

But it’s not just when the collapse happens that defines it. There are other factors that batting collapse aficionados learn to look out for.

Sometimes, for example, collapses arise from a terrifying spell by a particular fast bowler. Whether it’s Ambrose terror, or Jofra terror, or a great moustachioed Mitchell terror, the relentlessness of this breed of collapse makes it impossible to resist. 11/10.

Other times, batting collapses emerge not because of any particular input from a bowler, but rather due to the pressure of the match situation. A team sees a win on the horizon, and react to this skyline victory vista by inexplicably joining the cricketing equivalent of the Flat Earth Society, as they do everything they can to prevent tumbling off the edge of the match into triumph. Where ‘everything they can’ is a euphemism for ‘choke terribly’. These choker specials are an especially reliable breed of batting collapse, popular throughout the entire world, from Cape Town to Johannesburg and everywhere in between. 13/10.

Another, rarer, variation is the elongated batting collapse. Most batting collapses move quickly, feeding on dressing room panic as the next batters in scurry to get their kit together.

In contrast, a long collapse is an unusual breed that arises in the specific case of a team batting so defensively in an attempt to ensure a draw that they forget to score runs. As always in this results-oriented world, the attempt to dot one’s way to the end of the match is fine when it works. But when it doesn’t and wickets instead steadily fall while very few runs are tallied, the stretched-out nature of the collapse is an amusing oddity.

Perhaps the finest of these absurd-to-behold, elongated batting collapses came during the Adelaide Ashes Test in 2006, a Test that most England fans assure me never took place. But even if this match has been Mandela Effected out of existence, the mere idea of an extended collapse where nine wickets were lost for just sixty runs over the better part of two sessions, costing a team the Ashes is a splendid notion. 12/10.

These are just a few of the different breeds of collapse. There are countless others, including a wide variety of mixed-breed batting collapses that combine the various strands of comic DNA found in the purer versions. Have you ever seen a Broadfaced Duke’s ball swinger’s special? It’s the cutest thing imaginable. 60/10.

But regardless of whether they’re purebred or mixed, batter or bowler-inspired, long-tailed or short-tailed, the best thing about collapses is that whatever type you end up with, you know you’re guaranteed a piece of comedy cricket you can always rely on. A fan’s best friend.