Home Dan Liebke Why Cricket is the Greatest Sport No. 4: New Zealand 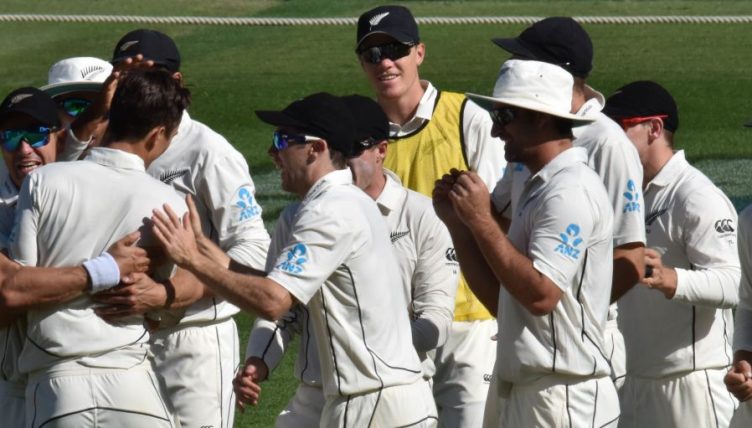 If international cricket teams were characters in a high school movie – Pretty In Pink Ball Tests, perhaps – then most of the roles would be stereotypically clear cut.

England would be the sneering rich kid, Australia the crass bully, Pakistan the mysterious weirdo, South Africa the strutting jock, West Indies the laid-back stoner and so on and so forth. I’m sure you can fill in the rest.

But New Zealand? New Zealand would be the hero of the film, as we followed their brave attempts to fit in with the rest of The Lunch Break Club, armed with nothing more than a plucky combination of nonthreatening good looks, snappy one-liners and slightly dorkish charm.

And it’s this perennially affable New Zealand team and their ongoing presence as a major cricketing nation that offer yet another reason why cricket is the greatest sport humanity has ever developed.

Of course, other sports also benefit from New Zealand participation. Most famously, rugby union has the All Blacks, a stampeding force of unstoppable dominance, more cosmic myth than sporting team.

If the New Zealand cricket side is the everyman protagonist of our teen movie, then the All Blacks are their beloved off-screen older brother, the pride of the school who went to college on a football scholarship and whose deeds are still whispered about by staff, students and parents alike, all wondering why the cricket team can’t live up to their brother’s impossible standards, only for a cathartic cameo in the final act where the All Blacks, played by Charlie Sheen, reveal that, in fact, it was they who were always secretly envious of their younger sibling.

And rightly so. Because the New Zealand cricket team has spent several decades just making everything noticeably more delightful wherever they go.

This tendency arguably reached its zenith when New Zealand visited England in 2015. On that tour, Brendon McCullum’s side won over the local press and fans to such an extent that it would not have surprised if a sobbing media pack, overcome with acute Guptillmania, had hurled themselves in front of the Black Caps as they tried to board their plane, clinging to their legs and pleading with them to stay.

And despite Michael Clarke warning England to ‘get ready for some broken f’en hearts’ and vowing to get right up in everybody’s face with the friggin’ bonhomie and geniality in the Ashes tour that immediately followed, the Australians were never a chance to compete with their Antipodean brethren in the belovedness stakes.

Because while certain teams seem to bring out the worst in one another, it’s New Zealand who consistently bring out the best. And they accomplish this with nothing more than swashbuckling style, outstanding sportsmanship and their undisguised love of the game.

And if the price we pay for that is McCullum occasionally getting a little bit lecturey at opponents who have disappointingly not lived up to his tremendous moral standards, that’s a fair exchange.

McCullum explains to Bailey how the Spirit of Cricket means that Hobart should withdraw from the finals so Brisbane can play. #BBL07 pic.twitter.com/DFI0LpKvhs

New Zealand play cricket well. And they look like they’re having fun doing it. They win often enough to be respected, but not often enough to be resented. Their players tend to be funny and smart and skilful, yet also self-deprecating. Remarkably few seem to be dickheads. They’re not perfect, obviously, but nor do they claim to be. And if they make mistakes they tend to correct them. Which, ultimately, is all we can really ask for.

It’s all perfectly delightful and charming. And if, as one sometimes suspects, part of New Zealand’s motivation for behaving this way is to make Australia look worse in comparison, that’s probably okay too, given, y’know, The Incident.

It’s almost forty years ago now that Australia’s greatest ever captain, Greg Chappell, found himself in the enviable position of having virtually secured victory in a final of one of the tobacco-sponsored ODI tri-series of the era. With just one ball remaining in the match, he had successfully manoeuvred his New Zealand opponents to a position where their only path to even salvaging a tie from the game was for their incoming batsman to hit a six from the first ball he faced.

Good enough for most cricket captains. But not for the ever-vigilant Chappell, who sought to remove even this slimmest of risks from the equation.

And so Chappell called upon his peerless knowledge of the Laws and playing conditions of the game and found a lateral-thinking solution to ensure his side victory. He instructed his brother – who was conveniently also the bowler – to roll the final ball underarm. And with that piece of tactical genius, the game was won for Australia.

For unclear reasons, all hell then broke loose, with Chappell’s masterful ploy criticised by virtually everybody, from former captains and media pundits all the way down to assorted Prime Ministers. Ultimately, the condemnation became so intense that Chappell was forced to disown his own strategic masterstroke, blaming it on mental fatigue and/or the as yet unborn David Warner.

This was mostly a shame, as virtually everything driven by a Spirit of Cricket-induced frenzy is. But on the positive side, the moment gave New Zealand an opportunity to

occupy the moral high ground. And once they got comfortable up there, they decided they’d really rather quite like to stay, if that was okay with everybody else.

Which, of course it was. Because as cynical as one might be about the Spirit of Cricket, there is something to be said for the Black Caps being so relentlessly pleasant that wherever they go, they make everybody else enjoy their cricket just that little bit more.

Cricket is the greatest sport there is. And New Zealand somehow make it even better. Gosh, I sure hope they find a date for the prom. Ideally, their cute best friend who, if they’ll only open their eyes (and their heart!), they might just realise has been the right one for them all along. (This may now be a World Cup metaphor. I must admit I’ve rather lost track of the thing.)