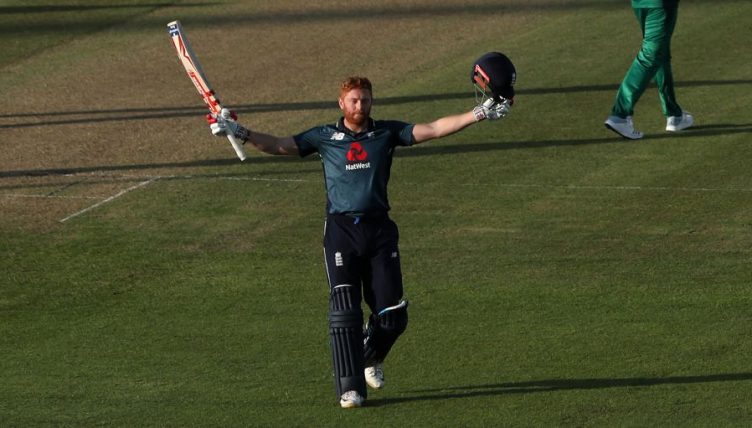 England chased 359 to win the third ODI with five overs to spare.

England chased 359 to win the third ODI with five overs to spare and without their best batsman, who made a 50-ball hundred in the previous game.

England chased 359 to win the third ODI with five overs to spare and without their best batsman, who made a 50-ball hundred in the previous game, and with two of their all-rounders bumped up the order for a nice gentle pre-World Cup net.

And most staggering of all, really, is that all this happened and it wasn’t even slightly surprising. This England team’s ability to both concede and score gigantic totals is truly magnificent. In the last two years, England have conceded 13 totals above 300. More than anybody else. On the face of it, this is a bit of a problem for a team that expects to win the World Cup. It isn’t, though. England have won 10 of those 13 matches.

The numbers around this England ODI side grow ever sillier with each passing game. Pakistan’s beautifully crafted 358/9 turned out to be desperately, wastefully inadequate, never looking anything like a remotely challenging target once Jonny Bairstow and Jason Roy had knocked off the first 159 of them in just 17 overs of astonishingly controlled yet brutally powerful hitting.

All 16 sixes from a sensational display of big hitting! 💥 pic.twitter.com/QnqnxbsMDR

It’s very easy to draw the stark comparisons between this England team and everything they did in one-day cricket before 2015, but it’s fun too so we should all absolutely do it.

Kevin Pietersen’s insane 69-ball hundred against South Africa in 2005 – at the time something seemingly beamed down from another planet – was England’s fastest ODI hundred until 2014. After Buttler’s effort at the Ageas Bowl it is no longer in the top 10.

Bairstow’s numbers since finally winning a place at the top of England’s order – making an already fearsome batting line-up stronger still – are incredible. He has made seven hundreds in just 34 innings as an opener; among players with 1000 or more runs, his strike-rate of a tick under 115 is well clear of all-comers. His nearest challenger, almost 10 runs per hundred balls behind at 105.57? His opening partner Jason Roy.

Jason Roy and @jbairstow21 have only opened the batting together 26 times for England in ODI cricket but they've already scored more runs as a duo than any other opening pair in England's ODI history 👀👀 pic.twitter.com/pGjtOOjzTE

Bairstow’s ODI average as an opener now stands at 53.22, fourth among all openers with 1000 or more runs. Nobody else with a strike-rate over 100 in the role even averages 40 – although Roy (39.77) could put that right over the coming weeks.

Such is the astonishing talent in England’s ODI batting now that Buttler really wasn’t missed at all and Eoin Morgan had the luxury of wandering in at number six to apply the finishing touches to a chase that had long ago become a formality.

England have now made 16 scores in excess of 350 in 50-over ODI cricket, all but one of those coming since the 2015 World Cup. They’ve gone beyond 400 four times (as well as a 399/9) and successfully chased 350 with four or more overs to spare on three occasions.

Big scores are of course more commonplace now, but England are compiling them with unprecedented consistency.

Since the 2015 World Cup, India, South Africa, New Zealand and Australia have all scored their runs at a remarkably similar rate; Australia are the quickest of that quartet at 5.72 runs per over, New Zealand the slowest at 5.68. In that time, England have scored at 6.27 runs per over. And it’s not like those runs come at reckless cost, either: England and India are the only teams to score more than 40 runs per wicket over that period.

In ODI history, nine matches have seen 700+ runs scored. Of those nine, five have involved this post-2015 World Cup England side. #ENGvPAK

They have conceded 10 of the other 37. England have still won five of those matches, but their bowling remains demonstrably their weaker suit. There is no shame in that, and their record in games where they concede huge totals raises a genuine doubt about whether it even matters.

Adil Rashid was badly missed in Bristol, though, both for his mid-innings wicket-taking threat and the speed with which he gets through his overs.

In his absence, England bowled just seven overs of spin, took 25 minutes too long to bowl their overs and will now be without captain Eoin Morgan at Trent Bridge through suspension.

That itself is no disaster. He would surely have sat out at least one of the remaining two games in this series, and his absence in Nottingham will give James Vince a hit and Buttler some captaincy experience.

The other conspicuous absentee in Bristol was Jofra Archer, whose four-over spell in the rain-affected first ODI at The Oval appears to have nailed down his World Cup spot. It seems somehow fitting for this England team that this is both utterly ridiculous and entirely correct.

Joe Denly bowling just one (terrible) over as Rashid’s nominal understudy must now put his place in England’s World Cup squad at serious risk. Someone has to make way for Jofra Archer, and there is no law that says it must be another seamer.

Going into the World Cup with no back-up spinner would be a big call, but it would be a bigger one to fill a valuable spot in a small squad with one who – for all his other clear merits as a cricketer – is not up to the role required of him and doesn’t have the faith of the skipper.

If Rashid or Moeen Ali pick up an injury that keeps them out for a few weeks early in the tournament, then England will have a problem: wait for them to return or replace them in the squad? Tricky. But a minor injury would be less of an issue. Muddle through with just the one spinner plus a bit of Joe Root for a game or two. A more serious injury is not ideal, but equally easily handled; bring in a proper, permanent replacement.

With Vince seemingly now sure to replace Alex Hales and the assorted seamers all making their case to a varying degree, it is Denly who appears most vulnerable.

Put it like this: If Moeen or Rashid miss a game, would England pick Denly or would they pick, say, Tom Curran? In those terms, it looks a no-brainer.