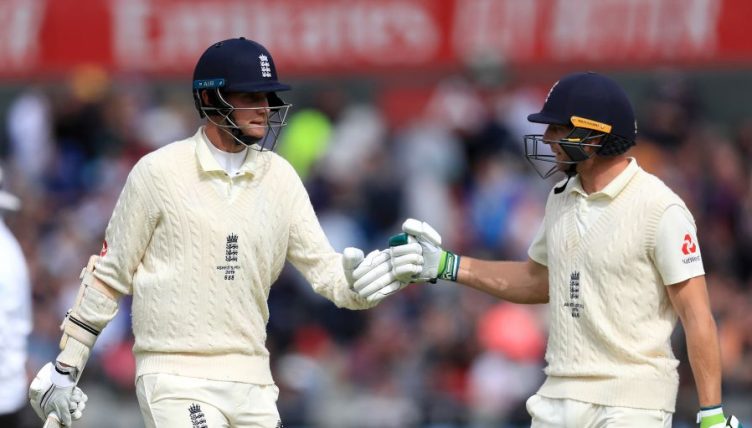 Regular readers will know we are slightly obsessed with Stuart Broad. He is an astonishing cricketer with an extraordinary range of comedy bits at his disposal and, less importantly, 463 Test wickets.

The fourth morning at Old Trafford provided precisely the sort of stage on which Broad thrives. England were in significant bother, eight wickets down, still miles behind and – crucially – the lunch break approaching.

These are all the ingredients Broad needs. Cue three minutes’ medical treatment for a blow on the arm that hadn’t actually happened. More impressively still, Broad was hit on the arm two overs later which raises serious questions about his growing control of the fabric of space and time. We’ve always been pretty confident that Broad is an essentially benevolent clown, but handing this sort of power over the laws of physics itself to someone with such a keen sense of mischief can only be a risk.

Nevertheless, he got England through to the lunch break on what had otherwise been a fraught morning for the home side.

In the space of two balls yesterday, Jason Roy had demonstrated precisely why England had picked him and were desperate for him to succeed and also why they maybe shouldn’t have picked him. The first was a back-foot punch through point of aching beauty, grace and authority. The first was a gate between bat and pad as an admittedly excellent delivery from the admittedly excellent Josh Hazlewood made a mockery of a thoroughly inadequate defence on its way to the middle stump.

There was something similar about Mitchell Starc. Instead it was days instead of balls. Having spent yesterday showing precisely why Australia hadn’t picked him in the first three Tests, spraying the ball around and leaking runs when Australia’s success in this series has been built on stifling England, he today showed what will always make him irresistible to selectors.

Is second new ball specialist a thing? If England can have a specialist batsman at number eight then we don’t really see why not. Starc was as good with the second new ball as he was poor with the first one and he picked up the two wickets Australia would have wanted above all others today. First Bairstow who, like Roy, played a very good delivery very badly indeed to be bowled driving hard at the ball for what feels like the 723rd time in his Test career.

Less eye-catching but probably more impressive was the one that shaped away just enough to find the outside edge of the rather more robust and proven Aussie-bothering defensive technique of Ben Stokes.

Starc is certainly not as good a red-ball bowler as Pat Cummins of Josh Hazlewood and arguably not as good as James Pattinson or Peter Siddle but he does undeniably add something to the side that they do not.

He would be absolutely ideal in a five-man attack where he would be truly free to do what he can do without trying to cover what he can’t. It’s a shame we won’t see Australia placed in a must-win situation in this series where they might consider it. Given the uninspiring nature of their six and seven, and the fact that both of those men are wicket-keepers, and the fact that Cummins, Pattinson and Starc – as he showed by slapping 50 while playing Broad better than all Australia’s other left-handers combined on day one – can all bat, we’d love to see them just go “f*ck it”, and stick those three at seven, eight and nine. Just once.

Elsewhere in an excellent morning session, Jofra Archer wandered aimlessly to the middle then wandered aimlessly for a first-ball single that would have seen him run out by two yards. I know his pace is down, but come on. It suggested he wasn’t quite switched on to the task, a suspicion confirmed by the airy waft that gave Pat Cummins a deserved wicket with one of his least deserving deliveries. Cricket, that.

What Tim Paine’s teammates think of his reviews now. Prefer staying in their positions and watching him get it wrong on the big screen rather than waste their energy walking towards him in the middle @cricbuzz #Ashes #ENGvAUS pic.twitter.com/BkIIJsrcAC

Tim Paine, meanwhile, decided to spaff Australia’s final review away on a nonsense lbw appeal. Might as well. This late in the innings, what’s the worst that could happen?

In the afternoon, Broad extended his real-life Jofradamus antics to a celebrappeal against David Warner that seemed to actually form part of his followthrough. Whether that is Broad meddling with time again or just what is now approaching a 50/50 gamble on this being the ball with which he’ll dismiss Warner is less clear.

He appeals straight away and it looks like there may have been an inside edge but ultra edge shows there wasn't!

His cheery farewell wave to Marnus Labuschagne was more classic Broad. It was without doubt the great man’s day.

In other far less important news, Steve Smith then did his innings again, Pat Cummins knocked over both Rory Burns and Joe Root – men who scored half England’s first-innings runs – for nought in his first over, Jason Roy, moved down the order to number four, still faced a ball before sacrificial opener Joe Denly, and Australia will at some point tomorrow retain the Ashes.