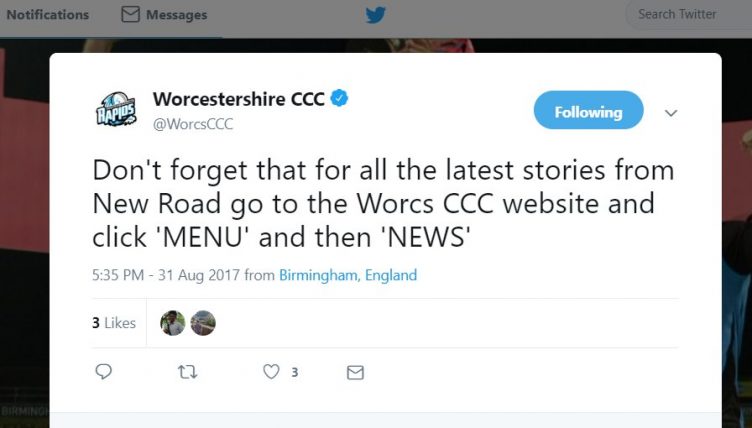 But there was one thing – apart from the DM groups where you cheerfully slag off everyone who’s not in that particular group – that made living in Trump-amplifying, Brexit-encouraging Twitter bearable.

And that thing was the Worcestershire County Cricket Club account. Look at @WorcsCCC now and, to the unitiated, there is nothing unusual about it at all. It’s a blandly competent sport-corporate social media account. Links to the website, branded photo and video content and dumb simple questions asked with faux-interest in what followers might actually have to say rather than a desperate lust for a few more engagements on the monthly spreadsheet.

It is, in short, exactly like a million other accounts in cricket, sport and even the terrifying world of other stuff beyond that comfort zone. It is neither good nor bad. It just is.

And this is an absolute tragedy.

Because WorcsCCC used to be hands down the best account on Twitter. It had a glorious and, looking back now, inexplicably lengthy stint at the top of the pile due to its being run, at least in part, by someone who appeared never to have seen the internet but instead had it explained to them by someone who saw it once while on holiday and whose nephew owned one of those iPads.

One of the truly great things WorcsCCC – now all dreary straightforward bitly links – used to do was send you on a little treasure hunt to find any content.

A link to the website? Ha, anyone could do that. Worcs had a different way. A better way. They would tell you to open the website, click on MENU then NEWS. Sometimes they wouldn’t even tell you what delights might await within. Could be a new two-year contract for Jack Shantry, could be news of a Second XI player scoring 37 and taking 1/42 in Western Australian grade cricket, or anything in between.

It was an adventure. We all need adventure in our lives.

Read Joe Clarke's thoughts on day one versus Durham on the Worcs CCC website. Click MENU and then NEWS

WorcsCCC had also perfected the art of “finding the local angle”, to an almost satirical degree. “Worcestershire’s Moeen Ali left out of starting XI as England lose by a million runs before James Anderson and Stuart Broad have a fistfight in the nip.” That sort of thing. Although the lawyers have asked me to stress not that specific thing.

The golden era of WorcsCCC tweeting – indeed, all tweeting – was also marked by a total refusal to acknowledge Twitter’s facility to thread tweets, with follow-up tweets routinely sent minutes later entirely separately and adorably incomprehensibly to anyone who happened to miss the original missive as it sped downstream along the great Twitter shitriver.

In many ways, Worcs were on the side of the angels here, staying true to the pure 140-character microblogging origins of the site. It was definitely preferable to that dull American fella who routinely sends tweets like “Trump is definitely done for this time for sure honest and here’s why. 1/2894” and gets immediately quote-tweeted into your timeline by 100 people who really ought to know better.

And again, those little context-free Worcs gobbets would send you on a diverting little mystery tour. Because a second tweet saying something like “He is now the leading scorer for Worcs in T20 games played on a Wednesday in July” would often turn up 15 or 20 minutes after an original tweet you hadn’t seen. How could anyone resist going back to their feed to find out who or what they were talking about, even if more often than not it was Daryl Mitchell or an Olly Murs setlist? It was a little bit of fun in a world where it is in desperately short supply, a brief diversion from the drudgery of everyday existence.

I know it sounds like I’m just taking the piss, but I truly, unironically miss the old WorcsCCC. I miss knowing that visitors to the university or city shoppers could park in the car park in front of the Premier Inn (£2.50 for 3 hours, £3.50 for 12 hours, £5.50 for 24 hours). I miss the time they did six (non-threaded, naturally) excited tweets in a row to celebrate a hot-tub sponsorship deal that wasn’t even new. I miss having to click my way through MENU and NEWS to find out how the weekend’s Birmingham League action had gone or what the Boomtown Rats made of it all.

WorcsCCC was something genuinely different and unique, even if it seemed out of place in a modern world it no longer understood. Others might not make you work quite so hard, but nor would they offer the same rewards. It was accidentally brilliant despite confusion over what it was even there to achieve, and a source of constant delight to its small but committed group of supporters.

And it was therefore the perfect county cricket Twitter account. Yeah, you saw where that was heading.

There’s nothing wrong with the new-look account. Its numbers are probably far better, its engagement definitely will be. But the soul of the thing is gone.

It’s not for me. Whenever I want to get all the latest from Blackfinch New Road, I’ll still be clicking on MENU and then clicking on NEWS.