Home Dave Tickner Archer at eight? England could be about to pick their most exciting tail for years

Archer at eight? England could be about to pick their most exciting tail for years 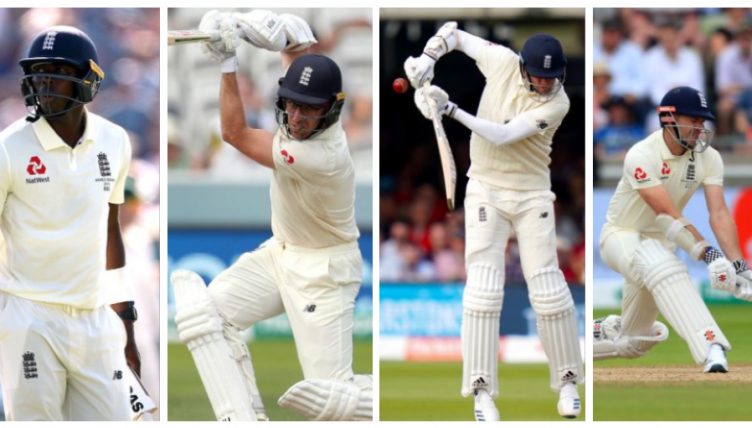 Nothing is confirmed yet, but it does appear quite likely that England could pick their greatest and funniest tail in years for the fourth Ashes Test at Old Trafford.

Ever since big Duncan Fletcher rocked up with his mirror shades and imperturbable face, looked at a tail of Mullally, Giddins and Tufnell and thought ‘f*ck that’, England have picked a whole host of All-Rounders, Bowlers Who Can Bat A Bit, No Mugs With The Bat and lads who Know Which End Of The Bat To Hold. The standing joke in more recent years has been that England are a side that bats all the way down, even if not always all the way up.

That might be about to change a little bit. England may well be about to pick what is both arguably their best, most rounded and most exciting bowling line-up since the 2005 fellas but also – and more importantly – their most fun and exciting tail for absolutely ages.

England’s bowling line-up in recent years has routinely included your Moeen Alis, your Sam Currans and the Chris Woakeses of this world. All very fine batsmen with demonstrable international batting pedigree.

The likelihood now is that none of them will be in the side at Old Trafford. If James Anderson proves his fitness as expected, then it can surely only be Woakes who makes way for the return of England’s most successful bowler ever. Woakes, like all the other all-format members of the World Cup win bar Ben Stokes who doesn’t count because he’s a freak, has appeared increasingly weary as this series has gone on. Having taken on much of Anderson’s workload in Birmingham and been very much the third seamer in the first innings at Lord’s, he has grown increasingly peripheral. Woakes has sent down only 25 overs in Australia’s last three innings.

Even if Anderson doesn’t return at Old Trafford, there is now a very decent case for Curran taking Woakes’ place.

But let’s assume Anderson is fit, and that it’s Woakes who makes way. That leaves Jofra Archer at eight, followed by Stuart Broad, Jack Leach and James Anderson. Now that is beautiful. It’s not anywhere near as bad as the great Mullally-Giddins-Tufnell Axis of Ineptitude, but it is potentially every bit as fun.

If anything, it’s the fact that no member of that tail is truly irredeemably incompetent that makes it so much fun. Based on his first-class record, Archer is very much in the recent English tradition of Bowlers Who Can Bat. His first-class batting average is better than Tim Paine’s and he will almost certainly swipe some poor sods for a 110-ball Test century somewhere along the way. For now, though, he is understandably and repeatedly pelted with 90mph bouncers from one end and reduced to trying to smear as many as he can off Nathan Lyon at the other.

And if it’s comedy batsmen you’re after, you can’t say fairer than Broad. There is no need to get into his highlights reel here, the man’s a genius and we’re lucky to have him.

Then you’ve got the returning Anderson. My favourite kind of number 11, because when you watch him bat it’s often not immediately apparent he’s not very good at it. Most number 11s have something fundamentally wrong with the way they do it. They don’t look right. Their technique is poor. There is nothing particularly wrong with Anderson’s technique. He has a solid enough defence, an attractive left-hander’s cover-drive and a genuinely quite good reverse-sweep. He cannot play the short ball, but nor can most of England’s top six. Then after four or five balls he gets out, apart from that time against India when he didn’t for ages and scored 81 hilarious runs. The most extreme example of this sort of number 11 is still The Monty Channel’s Monty Panesar, a man who had a genuinely great looking technique but whose eyes and hands simply refused to communicate with each other.

Anyway, England’s batting line-up at Old Trafford looks set to include at least three number sixes, potentially as many as four wicketkeepers, the currently undefined Jofra Archer and a tail comprising three number 11s. But three number 11s with highest Test scores of 169, 92 and 81. If that’s wrong, we don’t want to be right.