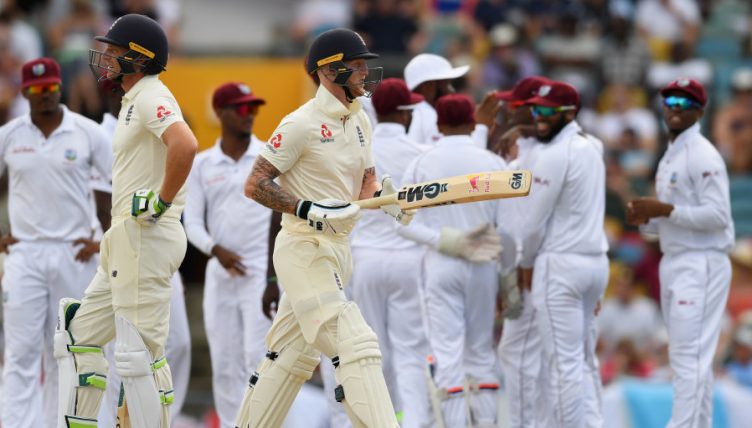 It was a day that started and ended with Everyone’s New Favourite Cricketer Shimron Hetmyer launching the ball around the Kensington Oval with thrilling, youthful abandon.

Miraculously, what happened in between was even more entertaining.

The Test match seemed to be bubbling along nicely but quietly when England reached 30/1 at lunch having taken the last two West Indies wickets at a cost of 25.

Keaton Jennings had got out for 17 because of course he had, but the pitch was still good and the match beautifully poised.

James Anderson’s face when, after bowling his heart out for 5/46 from 30 overs of perspiration, he was required to go out and have a little bat at 73/9 told its own story. We were all Jimmy in that moment. He ain’t smiling no more.

Soon enough 73/9 became 77 all out as Adil Rashid’s wristy resistance was ended. Cue the usual questions and fury and inquests. There is no doubt this happens far too often to an England side with designs on top spot in the Test rankings. They have twice lost all 10 wickets in a session since 2016 and avoided that fate here only by virtue of Jennings’ airy-fairy drive occurring just before lunch. They still lost all 10 wickets for 54 runs in 21.2 overs.

Without wishing to absolve the batting line-up of responsibility for getting bowled out for nothing again, this had at least as much to do with what West Indies did right as what England did wrong.

Sober judgement of each wicket in isolation would find only Jennings and Moeen Ali guilty of demonstrably awful shots. Rory Burns could have defended with more conviction. Jos Buttler could have dropped his hands.

But these are minor gripes inflamed by the chaos and the need for blame. If you get bowled out for 77 someone has to take the brickbats, even if that’s for playing at a well-directed short ball delivered at a deceptive angle from wide on the crease. In truth, this was good players dismissed by better bowling. Holder averages 10 with the ball on this ground and showed why, but it was Roach who truly caused the carnage with 5/17.

The only fast bowlers to take more wickets for the West Indies than Roach are undisputed legends of the game: Walsh, Ambrose, Marshall, Garner, Holding, Roberts, Hall. Roach’s 171 wickets at 28 perhaps deserve greater recognition than they get. He is surely the best West Indian bowler of the difficult post-Walsh years. His five wickets came in a 27-ball burst after lunch at a cost of just four runs and have swung this match decisively the way of his team.

England’s team selection has been proved wrong yet also irrelevant. Canny of them. A narrow defeat might have been awkward, but there is no team selection that gets you out of a 77 all out hole. Certainly Stuart Broad would not have.

West Indies managed to lose five wickets themselves in the blink of an eye as 52/0 became 61/5 after correctly if drearily opting against enforcing the follow-on on a pitch that has done little to suggest 18-wicket days should be the norm but is only going to get harder to bat on.

Moeen Ali took three of those while Ben Stokes enhanced his reputation as the talisman of this side with two more in a never-say-die spell of hostile full-blooded fast bowling.

At the fall of the fifth wicket Jeff Dujon showed just how doom-laden West Indies cricket can get these days by lamenting that the team 273 ahead with five wickets in hand had “thrown it away”. He’d gone full England Cricket twitter, which you must never do.

The Windies were already safe then and even more so by the time Hetmyer and Shane Dowrich added another 59 enterprising runs. Hetmyer fell late in the day to give Sam Curran a belated success, but it hardly mattered.