England plan to get Smith pays off at just 1143rd attempt 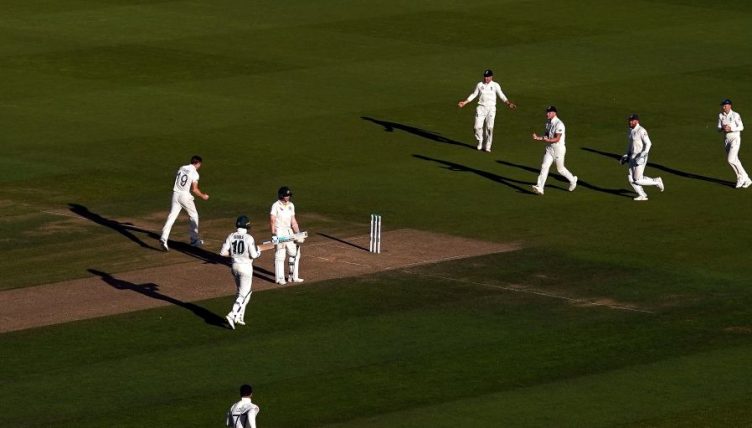 And it happened relatively early in his innings as well, when Smith had only 80 to his name. His lowest score of the series. He’s now failed to convert any of his last two half-centuries against England. It was impossible to process such an astonishing failure, until confirmation came after play that he was suffering with the flu. In many ways it was a relief to have some sort of earthly explanation. Maybe we’re not headed for a disaster of biblical proportions after all.

Steve Smith says he has the flu but I think, technically, it's malware. #Ashes

Both sides had horrendously sloppy days to open this Test, an end-of-term feel in the one series on the schedule where a drawn series is meaningless, what with Australia so far ahead on boundaries scored.

Australia carried that lackadaisical approach into day two. England, to their credit, did not. First they added 23 runs to their overnight 271/8, a good 23 more than the seasoned England watcher could realistically have hoped for.

Still, though, it felt some way off par in the conditions and even further short of what was required with Smith in the opposition.

The only slight early divergence from the established blueprint for an Australia innings in this series was the fact Jofra Archer rather than Stuart Broad accounted for the openers. David Warner’s latest failure – a record-breaking eighth single-figure score in the series – was his strangest yet. He didn’t appear to make any contact with a wild and desperate attempt at a cut yet when given out by some pretty sketchy DRS evidence accepted his fate without fuss. Maybe he had hit it, maybe he is now resigned to bad things happening to him here. Marcus Harris then nicked low to Ben Stokes and the real game could begin.

Marnus Labuschagne and Smith did what they have done all series and made batting look a pretty straightforward enterprise. So dominant have they been, both in their command of the English bowling and the gulf between them and the rest of Australia’s batting you sometimes have to pause to remember they didn’t actually bat together until last week.

Labuschagne made 48 runs in very Labuschagne ways before he missed a straight one. Not as surprising as Smith doing it later, but still a neat foreshadowing of the bigger shock to come. It provided one of the highlights of the day as Marnus desperately pleaded his case to go for a DRS review – pointing out via the internationally accepted sign language that he had got a long way across and intimating the ball might have missed leg – while Smith simply leant on his bat slowly but repeatedly and in a manner that brooked no further argument shaking his head. Smith prevailed and was proved right by Hawk-Eye. Or perhaps it should be the other way round; Smith having spoken, Hawk-Eye had little option but to go along with the verdict of the most advanced ball-tracking software currently known to man.

Sam Curran, making his first appearance of the series, won a far more contentious lbw verdict against Matthew Wade with one that was just clipping leg, before pushing one across Tim Paine to find the outside edge and hooping one back at Pat Cummins to find the pad. Both teams now have pause to look at the fundamental uselessness of their middle-order batting in this series and wonder whether they might not have been better deploying their swing-bowling all-rounders earlier. The series score means England’s potential ruing is very much the greater. The unanswerable question at the heart of that debate is whether the swing both Marsh and Curran got here in a series that has seen very little of it was because of the conditions or the bowlers. Either way, both were excellent.

Curran’s most important contribution was not perhaps any one of the three significant wickets he took, but the way he troubled Smith on a consistent and extended basis in a way no other bowler has. You never really felt he was actually going to get him out, but you wouldn’t have been astonished if he had. A huge win for the young bowler.

For the first time, Smith seemed unable to quite line a bowler up 100 per cent. He was dropped in the slips on 66, survived a couple of tight lbw shouts and played and missed more times than in the rest of the series combined. He is now in a position where 80 is a failure and for him this was a particularly bad 80. How much part the Curran confusion played in Smith’s eventual downfall to the sort of ball he has been calmly knocking away for a single all series long perhaps only he knows.

Jofra Archer is averaging less than every England bowler with 20+ wickets since 1956. #Ashes

A piece on the latest remarkable chapter of an extraordinary start to his Test career:

And then, of course, there was Jofra. Taking his second six-wicket haul in his fourth Test. Bowling with pace and skill and intelligence. The 74mph knuckle-ball yorker to end Nathan Lyon’s counter-attacking 25 was absolutely delicious.

The 37 runs added by Lyon and Peter Siddle were an irritant to England, but it was perhaps unsurprising they had forgotten two more wickets had to be taken after finally defeating the end-of-game boss. Siddle followed Lyon soon after to a ridiculous catch from Rory Burns at fourth slip.

His reward for that was to spend four overs in fading light having bits chipped off him by Cummins and Hazlewood before being inexplicably given out lbw from the last ball of the day, which pitched two inches outside leg stump and was going at least as far over the top.

He reviewed and lives to fight another day. So too do England.