Home Dave Tickner England have too many good bowlers, but Anderson remains the one

England have too many good bowlers, but Anderson remains the one 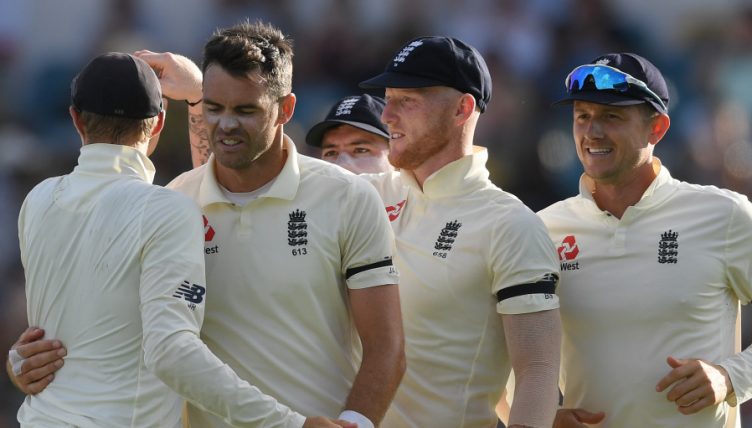 What if James Anderson just never stops getting better with age? What if he just keeps taking more and more wickets at a lower and lower average forever? What then?

England’s ridiculous swing bowler extraordinaire is breaking all the rules. Today he won his 146th Test cap, more than any other bowler in the history of the game. And he is still getting better. He has now taken 569 Test wickets and his average – which still sat the wrong side of 30 when he went past 350 wickets in the summer of 2014 is now 26.85.

A bowler who only takes wickets in helpful home conditions just became the first England bowler to take 200 Test wickets away from home.

Today he was masterful. The wickets didn’t come with the first new ball. But with this other-worldly and (presumably but frankly who knows) late-career Anderson you can be sure even if wickets aren’t coming runs won’t be either. He went 342 balls between his first and only wicket in Sri Lanka and the dismissal of Hope today, and probably conceded about 34 runs in that time. I haven’t counted them.

All opposition teams now treat Anderson with respect verging on reverence. Just see him off, is the mantra. Get your runs at the other end. John Campbell, a debutant rookie, had the good common sense to spend most of the first hour at Sam Curran’s end in a breezy maiden contribution of 44 before he fell to the spin of Moeen Ali in what would prove a false dawn for England’s twin-spin attack.

The breakdown of Anderson’s spells tells pretty much the whole story of the day apart from the bit about Shimron Hetmyer’s hat which is, to be fair, absolutely key.

He even managed to bounce someone out for the first time since records began, Shane Dowrich getting himself in a horrendous tangle and looping a catch so gently into the cordon that keeper and slips literally had a chat before deciding who should complete the humdrum formalities of taking the catch.

It was eventually decided Jos Buttler should be that man. He’d earlier dropped Hetmyer on just three, and thank Sachin he did because until Anderson’s selfish late bid for glory Hetmyer was the undoubted star of the day.

Kraigg Brathwaite and Shai Hope had played well to threaten a full-scale repeat of their Headingley heroics, while Campbell and Roston Chase had also played their part, but the day’s action really came to life from the moment Hetmyer arrived at the middle.

He has everything. All the shots, all the IPL cash, all the hats. He was helmeted when he deposited Moeen Ali for six over long-on, hatless – repeat, hatless – when sending Adil Rashid over long-off and in a wide-brimmed floppy hat for the last eight overs of spin before the second new ball and all Anderson’s ghastly scene-stealing. The bloke’s got 569 Test wickets; you’d think he could let a precociously talented youngster in varied headgear have this one, but no.

Hits a six in a helmet. Hits a second without one. Now batting in a white floppy hat.

Very much here for Shimron hitting his seventh six in a fedora. #WIvENG

From the moment he was spared by Buttler, Hetmyer played flawlessly until what would prove to be the penultimate ball of the day when he took a single from the first ball of Ben Stokes’ over and was left to stand and watch Kemar Roach edge the next to Joe Root.

By that point, Anderson had already arced one off Chase’s outside edge, bamboozled Dowrich and enticed Jason Holder to chip back a return catch. Stokes had earlier fulfilled his anointed role of making things happen by removing Brathwaite and the returning Darren Bravo in quick succession.

England ultimately end the day on top, and now well on course to get away with what looks in hindsight like a slightly wonky team selection. Pitch-reading is an arcane and chiefly fraudulent art. You might as well decide whether to pick two spinners based on tea leaves as possible early dampness in an admittedly odd-looking pitch that would play blamelessly throughout the day, perhaps growing a touch quicker by the time the second new ball wrought its destruction.

The problem for England is that they have too many good players who thoroughly deserve to play. It’s always described as A Nice Problem To Have, but that doesn’t mean it isn’t a problem.

There is a logjam in England’s middle-order where they also have three wicketkeepers who all also deserve to play. Ben Foakes’ faultless glovework and fine batting were a huge asset in the spin-friendly conditions of Sri Lanka and of course he could not be dropped here even if Jos Buttler or Jonny Bairstow – who both also deserved to play – could have done just as well here.

Rashid bowled adequately and with another innings and a bit to go may yet prove an astute selection but right now it’s hard to escape the idea that Broad would have been the greater asset in these conditions. And whatever kind of cricketer England ultimately turn out to have in Curran – and the odds are it’s a very special one indeed – he does not yet quite look a Test match opening bowler.

Broad being Broad, he still managed to get in on the day’s action. James Anderson’s second wicket of the day took the duo’s combined Test tally to 1000.

For the West Indies a familiar story. They batted really, really well right up until the moment they didn’t. Five of the top six reached 40, which is great. Four of those five have already failed to make it past 57 while the other – budding genius that he is – is fast running out of partners, which is not so great.