Home Dave Tickner Real talk: there is no balance between bat and ball in cricket and never has been

Real talk: there is no balance between bat and ball in cricket and never has been 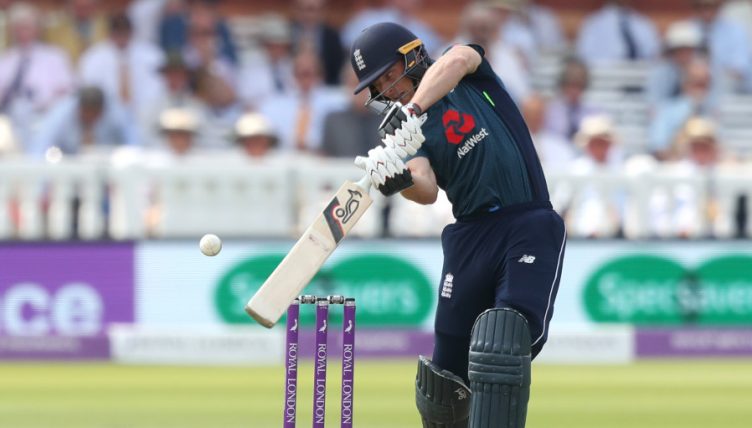 Cricket is a sport that exists in a permanent state of self-inflicted neurotic existential crisis. It’s how we like it.

Currently the problem centres on the fact two of the game’s greatest players have played two of their greatest innings in the same match. This is in itself a manifestation of a greater problem: batting in white-ball cricket has become just too damn good. (Another part of this crisis is that red-ball batting has got too bad, but one thing at a time for now.)

Whenever you get a high-scoring ODI – and you do get more of them now, but only really markedly so if you happen to watch England a lot – you can be certain that the reaction will be split roughly equally between people enjoying the spectacle and people whinging about how they prefer low-scoring games, actually, because those are more exciting than boring high-scoring ones.

The second group, despite the correct technical term for their position being “wrong”, like to think of themselves as the cerebral side of the argument. Wither cricket if it’s just all sixes and fours? Who’d be a bowler, eh?

First up, let’s be clear: low-scoring ODIs can be thrilling. It’s pretty much exactly four years ago that New Zealand beat Australia by one wicket in a game whose claims to greatness few would contest. It was brilliant, and best of all Australia lost. And high-scoring games can, as contests, be dull if the side batting second is never in the frame.

But let’s not pretend that low-scoring games are always thrilling. Literally one day after West Indies and England put on their six-hitting show Afghanistan beat Ireland by five wickets, chasing down 160-odd at four an over without ever once looking like losing. You can try and convince yourself that this was a better, purer and more exciting game of cricket if you like, but you’re only fooling yourself.

The ODI in Grenada, on the other hand, had everything. Two all-time great innings, plenty of other remarkably good ones, Jos Buttler saluting Sheldon Cottrell and Shimron Hetmyer’s 6 (2). Throw in the fact the bowling contributions of Mark Wood, Liam Plunkett and Adil Rashid were absolutely vital to England’s victory in a game firmly in the balance right up until its very final moments and you’ve got a game whose greatness should be utterly beyond question.

Indeed, it’s a game that exposes as thoroughly hollow the naysayers’ complaints. Those still complaining about high-scoring games after this one don’t prefer low-scoring games because they’re close and exciting – they very often demonstrably are not that – but more because they are more familiar and less discombobulating.

The constant refrain from those unhappy with the glorious entertainment in Grenada is a lament for the loss of balance between bat and ball. But here’s the thing: there is no “balance” between bat and ball and never has been. The contest between batsman and bowler is, at its must fundamental, basic level, skewed towards the batsman. Even if Dale Steyn is bowling to Chris Martin, the batsman – and here we use that word quite incorrectly – is more likely to survive any given delivery than be dismissed by it.

Next time someone demands an “even contest between bat and ball” punch them squarely in the face and then demand to know precisely what they mean.

Runs are scored more often than wickets are taken and it has been ever thus. There is always an imbalance; an ‘even content’ is nothing more nor less than the level of imbalance with which a particular observer is comfortable and therefore irrelevant. By sheer coincidence the “correct” level of imbalance for any given fan appears to be highly likely to correspond to the prevailing norms when he or she first got into the sport.

The people who now lament the demise of the 250 par score would have been laughed out of town by double-denim, long-haired fans from the 1970s when 3.5 an over was the correct going rate and the world record ODI total stood at 236.

The game evolves, the game changes. Batsmen hit more sixes now because they try and hit more sixes. They train for it physically and technically in a way their predecessors did not. Big bats, fielding restrictions, smaller boundaries are red herrings.

But here’s the other thing. In one-day cricket not only does balance between bat and ball not exist, it doesn’t remotely matter that it doesn’t exist.

A par score of 350 (and we’re still a long, long way from that being the case for anyone other than this insane England line-up) is as arbitrary as a par score of 250 or 150 or anything else. None of those scores represent balance, none of them represents some intrinsically correct ideal. With the dull draw not a factor in limited-overs games, it is literally irrelevant to the contest between the two sides.

Those who seek to blame this problem (CLUE: it isn’t actually a problem) on big bats, small boundaries, two new balls or whatever else are guilty of the implication that this change is something that has happened to batsmen rather than been achieved by them.

Batsmen – and we still can’t quite believe this but currently this really is specifically English batsmen – are not passive bystanders of this phenomenon. They are the drivers of it.

And the corollary as run-rates climb is that bowlers become more important, not less. Despite the extraordinary hitting of Buttler and Eoin Morgan, England would have lost Wednesday’s game were it not for the excellence of Wood, Plunkett and, eventually, Rashid.

Let’s run with some arbitrary numbers and, hypothetically, say the par score for ODIs was 250 and it’s now 350. At face value, this suggests a game that is now easier for batsmen and harder for bowlers. But that’s not really true; the dynamic has changed.

Suddenly, there are more ways for a bowler to ‘win’ the contest. A dot ball is now a win, and even a single is kind of a draw. Take Plunkett’s contribution on Wednesday, which you can rest assured every England player and those watching and paying attention will agree was crucial. His figures were 8-0-40-0.

Similarly, the reverse is true. When run-rates climb there are more ways for the batsman to ‘lose’. While it was overplayed, there were plenty of observers who noted with some justification that the sheer number of dot balls in Chris Gayle’s 135 (129) in the first ODI was a contributing factor in West Indies’ eventual defeat.

A bowler getting hit for six is now not under the same pressure he once was; a batsman who faces a couple of dots is suddenly right under it. The raw numbers may have moved in the batsman’s favour, but it doesn’t mean the contest has. It may seem a simple point, but it feels like it does need saying; cricket is a game between two teams, not between two disciplines

Wednesday’s ODI, then, had over 800 runs, was very close, ebbed and flowed, featured at least two world-class performances, with Wood’s arguably a third, an incredibly dramatic conclusion (that was down to a bowler), a batsman saluting a bowler and a batsman getting out second ball for six. Freaks my nut that people are so determined not to have enjoyed it.

If you do still want to make the claim that this was somehow boring rather than just fantastically, gloriously different to the game you grew up with, you’re left with only one place left to turn: that it’s the regularity with which these things now happen that makes them dull.

But again, this argument goes nowhere. I mean, Jos Buttler saluting a bowler almost never happens. And on the stratospheric scores front, England are the only team that makes these kind of bonkers totals on the regular. They have five of the six highest scores since the last World Cup and theirs is probably the greatest leap forward for one-day batting since Sri Lanka stuck Kaluwitharana at the top of the order with Jayasuriya in 1996. But this England side still failed to chase 290 a week ago.

Since 2016, teams batting first have produced 70 scores below 200 and 31 above 350. There have been some one-sided high-scoring games and some one-sided low-scoring ones. There have also been genuinely brilliant thrillers with first-innings scores everywhere from 129 to 418.

Cricket loves to talk itself down, but honestly: it’s pretty good, you know. Imbalanced, but good.