Same old England, always collapsing – 67 all out joins the list of shame 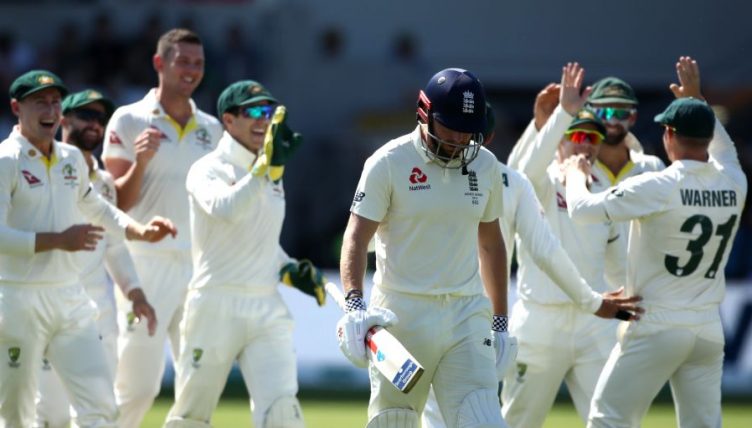 It just keeps happening. For the third time this year and the fourth time in 18 months, England have been bowled out for under a hundred in Test cricket.

In the same period they’ve made 400 once. When you are four times more likely to make under 100 than over 400, you have problems with your batting.

None of this is news. Nobody needed today’s surely Ashes-surrendering 67 all out to be convinced that England’s batting is flawed in myriad fun and interesting and hilarious ways.

The Jason Roy as Test opener experiment was always a bit of a wild gamble, albeit one rendered at least halfway understandable by his own dazzling one-day efforts and the failure of a string of ‘proper’ openers in the post-Strauss and now post-Cook wilderness.

But it was never really all that likely to work. Even the men he sought to emulate – Virender Sehwag and David Warner – had mediocre Test records in England, and both possessed meaningful first-class pedigree at the top of the order which Roy does not.

Roy is not immune from criticism. It might be outrageously harsh to ask someone to learn everything about Test opening on the job, but it’s not unreasonable to think after four games he might have picked up something. Today’s dismissal, a hard-handed drive on the up outside off stump, was almost sarcastically Jason Roy Test Dismissal and his thickest yet. His failure, though, is merely a symptom of a wider malaise. England made no apologies – and nor should they – for prioritising one-day cricket in the years building up to the World Cup. Their victory in that tournament justifies every one of those decisions, but it’s going to be incredibly hard to switch back.

If England had the Test batting stocks required, there would have been no need to take such a punt on Roy. The talk would have been whether he was worth chucking in to do damage at number six which is where, if anywhere, he should be batting in Test cricket.

Sadly for him, there are at least three other people in this XI who would ideally be batting at six. Above that, it’s all a bit of a mess.

The bone-headed insistence on Root batting at three is another example of symptom rather than cause. He should be England’s number four. It’s his best position and he is by a wide margin England’s best player. But now moving him back to a position he only left to try and cover the inadequacies of others will be a humiliating climbdown and appear weak.

Joe Denly top-scored today, as he did in the 85 all out against Ireland, but his continuing Test career remains one of the great mysteries of the age. It’s no sleight on him, a good county pro and by all accounts decent human, but his is an accidental career at the highest level, a product of a squad selection error in the Caribbean and the idea that continuity of selection overrides all else. It’s better than endless 1989-style chopping and changing, but it shouldn’t mean an utter stubborn refusal to face facts. Ed Smith does not come out of this well. Even his decision to recall Jos Buttler to the Test team is starting to lose its lustre.

Short-term, there is not a huge amount England can do. But, second innings miracles notwithstanding, it would be insane to continue insisting these are the seven best batsmen for the seven roles required. However humiliating it may be, Root must return to number four. The idea that the best player must bat three is macho bullshit based on zero facts. The second best Test batsman of all time has been happily batting at four for Australia in this series, and so did Steve Smith before him.

Marnus Labuschagne is a fine case study here. Even with the flaws of this England side, nobody would honestly claim Labuschagne has more talent than England’s batsmen. And while Australia’s bowling attack is formidably good, there is little wrong with England’s either. Yet he has made two half-centuries in a match where no England player has yet gone past 12; with his runs tally currently standing at 127 with power to add tomorrow, there remains a non-zero chance he will score more runs in this Test than England.

What he has done that England’s top seven have been unable or unwilling to do is treat Test cricket with respect. In both innings he has left the ball superbly. He has been willing to wait for the right balls to score from and not deviated from that plan.

He has had some luck, but you will always need that. Root dropping not one but two dollies off the same ball might be pushing it, but Marnus has certainly cashed in.

Is there, I wonder, a short clip that could sum up England right now?pic.twitter.com/lEJhrlAQDv

On commentary, Nasser Hussain said Labuschagne had set a fine example to any youngsters watching. Never mind that, he’d shown England’s top seven how to do it.

England’s dismissals in the first innings look horrific even by the inevitably horrific standards of 67 all out. But the one thing that should be said, not quite in defence but perhaps mitigation, is that those dismissals should not be viewed entirely in isolation. The wicket-taking balls might not always have been spectacular but there were plenty of good ones around them. A fine Australia bowling attack – and this particular shuffling of the pace-bowling pack has surely produced the best hand – bowled superbly well. There was not the let-up that we saw yesterday when Ben Stokes and Chris Woakes replaced Stuart Broad and Jofra Archer.

Stokes made amends today for both that sub-par bowling display and perhaps the most eye-catchingly bad of England’s many eye-catchingly bad shots today, sending down 15.2 overs of whole-hearted atonement separated only by four balls from Archer before he succumbed to cramp and Stokes was called back into action.

It was a remarkable spell, accounting for Travis Head with a swinging yorker and, late in the day, Matthew Wade caught behind off the glove. That Stokes was still able to muster a short ball of such hostility said much, as did his celebration of just having an exhausted little sit down.

He also beat the bat countless times, had Labuschagne dropped twice – three times if you count Root’s effort as a double – and caught behind off a no-ball. He got two wickets but deserved so much more.

As for England, though, they got precisely what they deserved.