Home Dave Tickner Test cricket: a game where 246 can be so much worse than 77 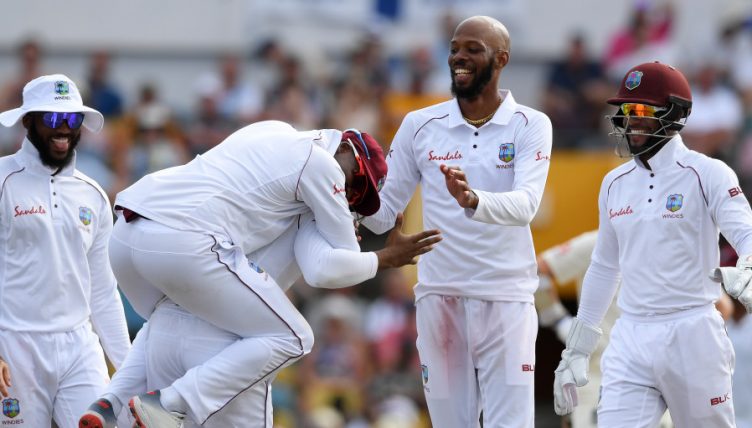 Is Test cricket the only sport where 246 can be so very much worse than 77? Golf, I suppose, but honestly: f*** golf.

Because however counter-intuitive it may seem based on such silly concepts as ‘maths’ or ‘numbers’, this pitiful performance from England was far, far worse than that first-innings 77 all out. That sort of batting collapse is sort of understandable. To be honest, it’s surprising it doesn’t happen more often. It was a perfect storm of brilliant bowling, flawless catching, edges and pads found unerringly, and, yes, the odd poor shot along the way. England genuinely didn’t do all that much wrong.

There’s a legitimate concern about England’s batting and how often they manage to throw in that kind of effort compared to other sides with their ambition, but there is more to learn about their failings from what happened today.

This was the pitch on which Jason Holder and Shane Dowrich batted for almost a day and could surely have batted for another. It was flat. There was no swing. There was no spin. Even the variable bounce that might have been expected wasn’t there. Neither was the betting outcome’s that were touted with a William Hill Promo Code. Batting conditions today were no tougher than yesterday’s.

Rory Burns showed as much; his dismissal may have been one in the long line of arse-achingly awful ones for England but there was little wrong with the 84 runs that had come before it. He, at least, should end the match feeling better about his game than he began it. As he is alone in that regard, it’s not something that should be completely overlooked.

But the day belonged to that demon bowler, wrecker of dreams and destroyer of worlds *checks notes* Roston Chase. It’s important when pulling apart England’s utter inadequacy not to completely overlook the bowler’s part in his astonishing figures of 8/60.

For Chase to return figures that qualify as comfortably the maddest thing that has happened in this Test is a fine effort indeed. He’s got a tidy enough first-class record, and, while he may have literally spun not one delivery, he bowled accurately and did bowl with nice flight and generated some bounce.

With that caveat out of the way, let’s start pulling apart England’s utter inadequacy. He is a fill-in bowler at this level, 42 wickets at 46 a reasonable reflection of his worth. A useful option for a few overs here and there, but no more than that.

I assume somebody’s already made a joke about how with England facing such an enormous target, the situation required a remarkable Chase.

England turned him into a match-winner. Burns, who really did play beautifully right up until the fateful moment that he didn’t, set the tone by playing for turn that had never been there before and wasn’t there now, the ball continuing gently on its prescribed path between bat and pad and into the stumps.

That was bad. Inexplicably, his more experienced team-mates saw this and decided to repeat this error again and again and again. Joe Root, who just about survived the one truly hostile, difficult spell of high-class Test bowling in the day when Shannon Gabriel roared in thrillingly after lunch, steered one meekly to slip. Ben Stokes repeated Burns’ shot. Moeen Ali managed to come up with something worse than his first-innings dismissal. At least a top-edged hook off a rampant fast bowler is an instinctive mistake; steering the last ball before tea gently into the hands of second slip is just sh*t.

Moeen Ali bags a pair as he pokes at one outside off stump and edges it straight to Jason Holder at second slip. A very, very loose shot. Windies four wickets from victory at tea.

By then, England were six down – we’re not even going to talk about Keaton Jennings getting out in Keaton Jennings fashion yet again because it makes us too sad – and Chase had four of them.

It was about to get weirder. In fairness to England, his next four(!) wickets were purest banter with slightly less direct blame landing on the shoulders of the batsmen. A ridiculous catch at midwicket from John Campbell removed Jos Buttler. An even more ridiculous catch at short-leg from Shimron Hetmyer did for Ben Foakes after he’d nailed a sweep. Best of all, Kraigg Brathwaite catching Adil Rashid beyond where the boundary rope should have been at deep midwicket, but inside where it had been inadvertently moved to. Even when an England batsman hit a six, he still got out.

Sam Curran ran past one fired down the legside – a genuinely clever piece of bowling – to give sub keeper Shai Hope a stumping and the game was done. West Indies win by 381 runs and it wasn’t as close as that makes it sound.

Now then. Does Chase’s eight-fer mean England’s obviously wrong team selection was actually right? No, it doesn’t. But England do need to be careful for the second Test.

In the summer, India got their team selection for the first Test in England wrong, playing only one spinner at Edgbaston when two were required. They then ‘corrected’ this mistake and picked a second spinner in the next Test on a greentop at Lord’s. India lost both games.

The point is, England need to go to Antigua and attempt to make a clear-headed decision on the team that is needed there. The pitch at the Sir Viv Stadium is expected to be a low, slow turner. It is unlikely to hold up as well as this one. Two spinners may well be the correct way to go. Whether three keepers is still right is, sadly, a question that might be worth considering.

Stuart Broad, you would think, has to play. Even with well over 400 wickets to his name he has still seen his reputation enhanced by the events of the last four days. Jennings may yet come under pressure from Joe Denly.

But England must ensure they pick the right team for that Test, and not just attempt to correct the errors of this one when it is now far, far too late.