Home Did You See Did you see… the T20 Finals Day mascot race?

Did you see… the T20 Finals Day mascot race? 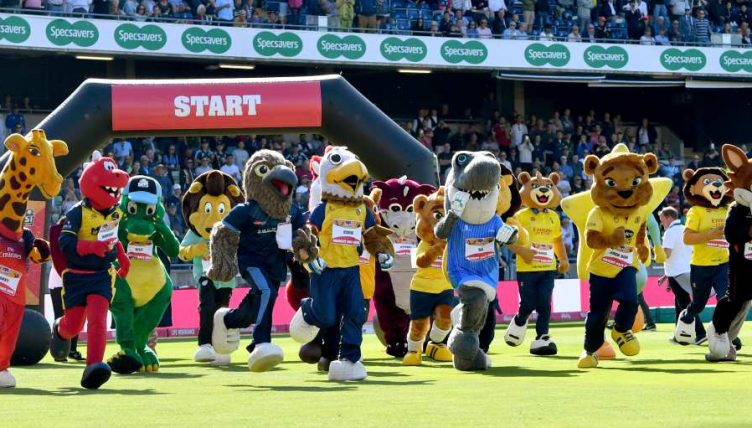 Only two mascots have ever won the mascot race more than once: Leicestershire’s Charlie Fox in 2011 and 2018, and Gloucestershire’s Alfred the Gorilla, who took back-to-back wins in 2016 and 2017.

Lanky the Giraffe, who represents my county, Lancashire, has never won it, which may or may not indicate that ludicrously top-heavy costumes are some kind of weakness in the sport of mascot racing.

On Sky Sports, David Lloyd invariably provides the commentary to this sensational event. Some years he’s good; some years he’s not good. He’s funniest when he’s deadpan and pretends to take the mascot race seriously and worst when he leans into his reputation and consciously plays up to being a “personality”.

Bumble’s finest moment this year was the disdain and disappointment in his voice midway through giving the betting odds. “Lanky the giraffe, 9/1 – absolutely no chance.”

The race was won by Freddie the Falcon, who crossed the line in style.

A flying finish for Freddie the Falcon 🐦@DerbyshireCCC are the #Blast19 Mascot Race champions! pic.twitter.com/dC2FDB2Rsp

Morgan the Dragon – what happened to Dewi?! – came second with Charlie Fox third.

I like the mascot race very much. I see it as a symbol; a sign that no matter how many tweaks and reboots English domestic cricket undergoes, it will always remain fundamentally the same thing. The names may change, but the game remains the same.

Money and marketing will shape the future of cricket in this country, but they will never entirely transform it. English cricket has one professional shoe and one clown shoe and there isn’t a damn thing anyone can do about that.

The IPL final is played at night. The po-faced players are marinated in white noise and scorched with fireworks and there isn’t a single moment when you aren’t acutely aware that what you are watching is A Big Deal.

Finals Day for the 2019 T20 Blast had a bit where 66-year-old Mr Motivator encouraged pissed-up fans in fancy dress to do aerobics. And they did – because they were English cricket fans so they know what cricket in England is all about.

Get fit 4 the #VitalityBlast final! 💪 @MrMotivator has the Hollies Stand feeling the burn before the final! 🤷‍♂️😂

Twenty20 cricket takes itself very seriously these days, but cricket in England is, always has been, and always will be about everyone making the absolute most of fluking a sunny day at the weekend. You can twist it and market it and try and steer the sport wherever you want, but it all ultimately comes back to this. A long, warm summer’s day is when English cricket works correctly.

Finals Day is a case in point. The whole reason why they devised the 20-over format in the first place was to create something short and easily-digestible. They then decided that the climax of the competition should involve playing three of these games in one day – both semi-finals and then the final. 120 overs amounts to a day and a third of Test cricket.

This makes no sense at all, but it works. It absolutely works because that’s what the British summer is about. It always feels like there’s a 30 per cent chance it’ll piss it down on any given day, so when it doesn’t, and you’re not at work or at school, you make use of every damn minute, right the way up to the bonkers 10pm sunset and probably beyond. Cricket plus fine weather will always provide the very purest instances of ‘seizing the day’.

What’s crucial to understand is that it has to be absolutely everyone making the most of things. This is key. Drunk adults need their behaviour tethered by the presence of children, otherwise it all gets a bit too lairy. (This is one reason why evening games never quite feel right in England – the crowd tends to be skewed towards drinkers and you need a balance.)

A correctly-mixed UK cricket crowd is there to wilfully enjoy stuff. The schoolkids who play games on the outfield during the innings break always attract full-throated appreciation and standing ovations. One time I went to a match at Old Trafford where they ran a competition that involved people trying to bowl a cricket ball into a washing machine. If they succeeded, they won a cricket-ball-dented washing machine. Everyone in the stands loved it.

A broad demographic inevitably means things tend to become a little bit light entertainment; a little bit scaled-up village fete. This is how you end up with a TV fitness instructor from the 1990s filling time between matches, because that kind of inoffensive, out-of-place, semi-nostalgic, what-will-they-make-of-this distraction doesn’t exclude anyone. No-one knows why this thing is happening and everyone has that joyous confusion in common.

A mascot race is similarly stupid and inconsequential, but you can latch onto your mascot and act like it’s the most important thing in the world. Okay, everyone’s united in enjoying something utterly ridiculous and pointless, but that doesn’t change the fact that they’re united – and that is a very rare and wonderful thing indeed.