Burns disappointed not to kick on after battling half-century 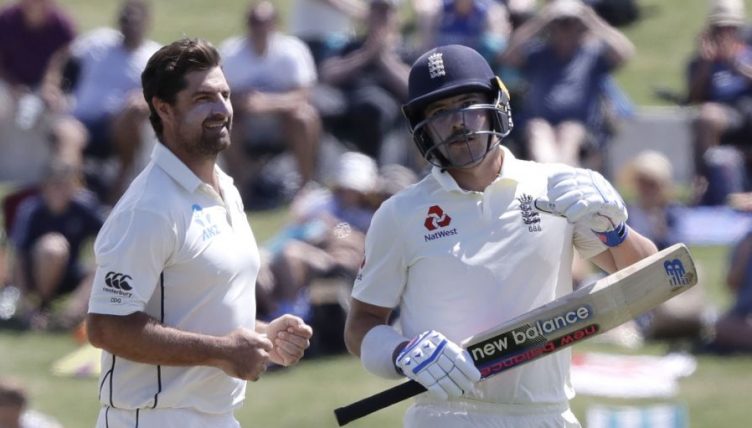 England opener Rory Burns was pleased he battled to a half-century but admitted his disappointment at not progressing further on the opening day of the first Test against New Zealand.

Burns rode his luck on a number of occasions to record a streaky 52 as England’s top order followed captain Joe Root’s instruction to adopt a more patient approach in an effort to eliminate the collapses of recent years.

The Surrey captain was one of three batsmen to go past fifty in Mount Maunganui as England closed on 241 for four, a total swelled by some belligerence from Joe Denly (74) and Ben Stokes (67 not out) towards the end of the day.

“It was slightly indifferent but I managed to scrap my way to a score and in the end was probably disappointed that it wasn’t a bigger score than it was.

“It’s been a good day’s cricket. The way they bowled and the discipline they showed, our run-rate was probably hovering just over two for most of the day until Stokesy got a few away there at the end.

“They’ve obviously bowled very well but I feel we’ve set up the game in a way where we’re really looking at establishing ourselves in this first innings and trying to get some good runs on the board.”

Burns edged between first and second slip on 37 and then survived a review for lbw after being rapped on the back pad by Boult, reprieved by ‘Umpire’s Call’ on height alone.

He would have been dismissed on 10 had New Zealand opted to query a caught-behind appeal that was not given, with Hot Spot detecting a faint edge.

However, Burns said: “I didn’t feel like I hit it. I was quite surprised when Ross Taylor ran past at the end of the next over saying to one of the boys that apparently there was a Hot Spot.

“I thought I missed it by a country mile but apparently I didn’t.”

Burns revealed England’s safety-first approach was partly because of Root’s plea as well as the sluggish pitch at the Bay Oval, hosting its first Test.

The medium pace of Colin De Grandhomme found some movement and Burns was one of the all-rounder’s victims as he finished with an impressive two for 28 from 19 overs.

Asked whether England’s go-slow was down to the surface or their captain’s comments before the Test, Burns said: “Probably a little bit of both in all honesty.

“The pitch seems like it’ll probably get slower so it’s lending itself to quite attritional cricket at points. You’ve got to scrap in and get in.”

However, Burns added that he and former Surrey team-mate Dom Sibley – who made 22 on his Test debut in a 52-run opening stand – are disposed towards starting their innings cautiously.

He said: “When me and Sibbo are walking out to the middle, the way we set up our four-day or five-day cricket is pretty traditional from both ends.

“It was nice and it was also nice to walk out there with Sibbo, it’s the first time we’ve done that in a while. I thought the way we went about it was pretty good.”

New Zealand seamer Neil Wagner credited England for their strategy although he believes they enjoyed moments of fortune.

As well as Burns’ let-offs, Stokes was given a lifeline on 63 late in the day when the all-rounder’s edge burst through Ross Taylor’s hands at first slip.

Wagner said: “I thought we bowled really well, we asked really good questions for long periods of time and at the same time they batted really well.

“Anything we threw at them, they played quite well. At times they had a bit of luck but sometimes you need a bit of luck, it happens in cricket.”