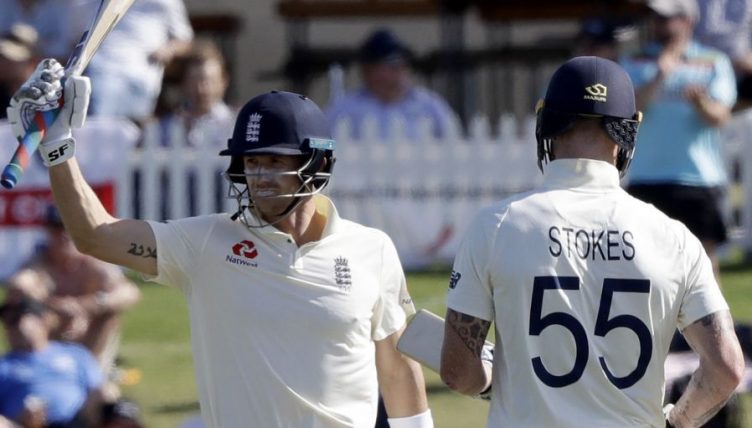 Rory Burns, Joe Denly and Ben Stokes all contributed fifties as England followed Joe Root’s plea for patience from his top order on an attritional opening day of the first Test against New Zealand.

In a bid to eliminate the collapses of recent years, England captain Root and head coach Chris Silverwood are aligned on a more watchful approach from their batsmen.

But the hard work of the England batsmen was nearly undone on a beautiful sunny day for Mount Maunganui’s first Test match.

After Burns fell for a streaky 52, Root’s dismissal for two left England precariously placed on 120 for three before Denly (74) and Stokes (67 not out) steadied the ship in a more adventurous final session, which ended with the tourists 241 for four.

Stokes benefited from being dropped on 63 near stumps.

England’s run-rate hovered at just above two an over for the majority of the day as New Zealand’s bowlers were able to keep their opponents on a tight leash on a somewhat tricky pitch.

The tourists had three half-century partnerships but none larger than the 83-run union between Denly and Stokes.

The Bay Oval surface was expected to be batsman-friendly but medium pacer Colin De Grandhomme was able to extract a fraction of movement through the air as he claimed two for 28 from 19 industrious overs.

The all-rounder accounted for openers Burns and Dom Sibley, who made 22 on debut after Root elected to bat first.

Sibley, while more known for a conservative approach in county circuit, caressed his first delivery through midwicket for four. He then settled into a more familiar pattern of self-denial.

All of his runs came between long leg and midwicket, perhaps not a surprise given his front-on stance, but an attempted drive to mid-on off De Grandhomme took the edge and was taken by Ross Taylor at first slip.

He had looked more assured in a 52-run opening stand than Burns, who was spared on 10 by New Zealand’s failure to review a caught behind appeal off Trent Boult as Hot Spot detected a faint edge.

Denly had taken 21 balls to get off nought as England went to lunch on 61 for one but then entered into a brief but fascinating battle with Neil Wagner.

As New Zealand’s left-arm enforcer predictably dragged back his length, Denly pulled him for four fours in the space of two overs. He also conceded a top-edge which bounced just short of gully, before another nick dropped in front of first slip.

Burns escaped again when either Taylor nor Tom Latham moved to complete a regulation catch in the slips, and Burns then survived a review for lbw after being rapped on the back pad by Boult, the decision going the way of ‘Umpire’s Call’ on height alone.

He moved to a fortuitous fifty but was unable to capitalise after groping outside the channel and feathering behind off the metronomic De Grandhomme, who yielded just four runs in his seven-over afternoon spell.

Root needed 21 deliveries to get off the mark and came back for a second run when Jeet Raval fumbled at mid-on, a misfield that would have unintended consequences for the Yorkshireman. On the next ball, Root fiddled outside off stump and edged Wagner to Southee at second slip.

At 121 for three at tea, England’s diligence was in danger of backfiring, but Denly and Stokes upped the tempo shortly after the former had reached his fifty with a trademark cover drive for four off Wagner.

Boundaries flowed more freely with the introduction of spinner Mitch Santner, who was dispatched back over his head for six by Denly while Stokes tucked into the tiring Wagner before the new ball was taken once due.

Denly took England beyond 200 but fell straight after when Southee’s delivery from wide of the crease took the edge and was pouched by keeper BJ Watling, moving to his right.

Stokes flayed Boult for four successive fours – although the last of those should have been snaffled by Taylor at first slip, giving England’s premier all-rounder a lifeline he could make New Zealand rue on Friday.