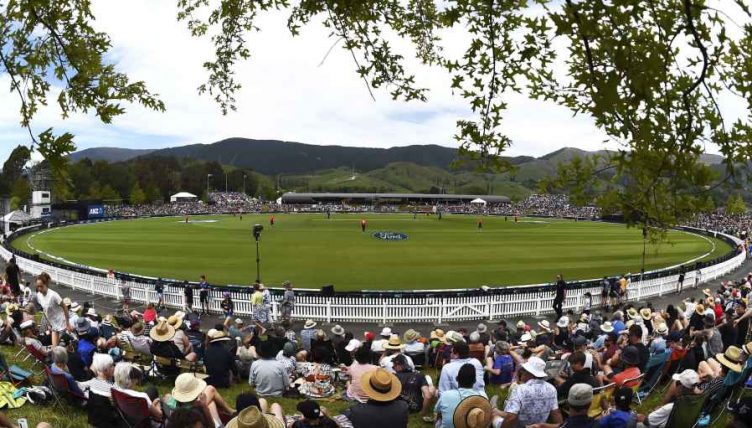 An inexperienced England side showed they’d been paying attention and had learned from the senior players as a spectacular collapse of five wickets for 10 runs in 19 balls handed the third T20I to New Zealand in Nelson.

Yorkshire new boy Dawid Malan’s half-century looked to have set England on their way to a comfortable win before it all went tits up. The final margin was 14 runs as New Zealand moved into a 2-1 series lead.

Malan’s 55 from 34 balls, plus some fine strokes from James Vince, had left England needing 44 from the final 34 deliveries with eight wickets in hand.

In mitigation, this was an England side containing only 142 T20 caps before this encounter, 83 of them belonging to Morgan, with the tourists including all six players who had not made their debut in the sprint format before this series.

Matt Parkinson peculiarly bowled only two overs on his international bow, taking a wicket with his fifth delivery, while fellow England debutant Tom Banton contributed 18 off 10 balls before he was bowled after missing a ramp.

England were sharper in the field after dropping five catches in Wellington while the Curran brothers impressed, taking combined figures of three for 58 from eight overs, though Saqib Mahmood was expensive.

After England had been asked to bowl first, Martin Guptill hit top gear early with 33 from 17 balls while Colin De Grandhomme’s 55 from 35 deliveries helped the hosts to a what would prove an insurmountable total.

Guptill got New Zealand off to a flyer with five fours in the space of six balls at one stage, Tom Curran conceding successive boundaries after straying down leg-side before Mahmood saw his first three balls dispatched to the rope.

De Grandhomme’s meaty pull flew over long leg for six but he lost Tim Seifert, who handed Parkinson his maiden international wicket after aiming an audacious reverse slog sweep, only to be bowled through his legs.

De Grandhomme took the whip hand in a profitable 66-run stand alongside Ross Taylor, expertly creaming Parkinson over extra cover for six before reaching a 27-ball fifty with a powerful straight drive for his third maximum.

Tom Curran varied his pace on his return and was rewarded with the wicket of De Grandhomme, who picked out long-on, before Mahmood pinned Taylor (27) in front, the highlight of a day in which he returned figures of 4-0-49-1.

Sam and Tom Curran both bowled well at the death as New Zealand posted 180 for seven, with cameos of 20 from 15 balls from Jimmy Neesham and 15 off nine from Mitch Santner swelling the total.

READ: The illustrated commentary of Jack Leach’s trip to Specsavers

Banton sparkled briefly at the start of the reply by clubbing Lockie Ferguson for six over midwicket, but he then missed an attempted ramp off Blair Tickner and was bowled for 18 off 10 balls.

His dismissal led to a brief period of regression for England as Vince needed six balls to get off the mark while Malan had taken only 15 from his first 14 deliveries before relieving the pressure with two fours apiece from Tim Southee and Ish Sodhi.

Neesham was clobbered high over midwicket for six en route to Malan’s 29-ball fifty but the left-hander was dismissed shortly afterwards, sending a Sodhi full toss down the throat of Guptill at midwicket.

Vince picked up the baton with back-to-back legside fours off Santner before sumptuously belting Tickner for six over deep square-leg and England seemed to be in the ascendancy when Eoin Morgan belted two sixes in three balls.

But the England captain (18) holed out later in Santner’s over with his side still needing 42 from the last five overs before a miscommunication led to Sam Billings’s run out before Vince limply struck to mid-on, one shy of a half-century, to give Tickner a second wicket.

By the time Lewis Gregory was bowled by Ferguson, who accounted for Sam Curran two balls later, England’s hopes were in tatters as they duly subsided to defeat.