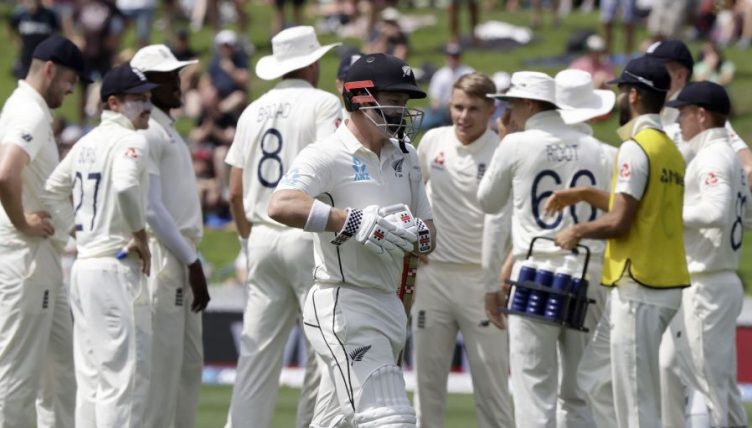 Stuart Broad took four for 73 as New Zealand unravelled after tea but England lost Dom Sibley and Joe Denly late on day two of the second Test at Hamilton.

However, Broad’s bouncers led to the downfall of both Watling and Mitchell as New Zealand lost their last five wickets for the addition of only 60 runs before England closed on 39 for two at Seddon Park.

Sibley endured a fraught stay at the crease, pinned lbw for four after playing around a straight one from Tim Southee, who had earlier clattered the England opener on the helmet.

Denly then edged behind off former Kent team-mate Matt Henry while Rory Burns was dropped on 10 and 19 as England’s top-order threatened to undo the bowlers’ fine efforts on a surface that had offered them little.

The short ball was a common theme throughout the day though it seemed England would once again be ground into submission by Watling, the double centurion at Mount Maunganui, where the tourists’ innings defeat means they need to win here to square the series.

Perhaps in an effort to boost their chances, Ben Stokes bowled 11 overs despite being visibly discomforted by his left knee on day one.

He showed few signs of the problem bothering him on Saturday although his left leg was heavily strapped before play.

It was initially thought he would be restricted to a fielding brief only as New Zealand resumed on 173 for three, with play starting half an hour earlier after an afternoon thunderstorm the day before.

Latham lasted just nine balls before leaving a straight one, his rare misjudgement allowing Broad to clip the top of off-stump, while Henry Nicholls carelessly hooked Sam Curran to Broad at long leg to depart for 16.

Curran had earlier induced the outside edge of Watling, only for the ball to bounce in front of wicketkeeper Ollie Pope.

Mitchell gradually found his footing alongside the more unflustered Watling, serving notice of his intent with a towering six down the ground off Joe Denly’s part-time leg spin.

The second new ball came and went with no reward for England, who stuck diligently to their task, Woakes yielding just six runs in a seven-over spell either side of the lunch interval.

Jofra Archer mixed up a short-ball barrage with a few of his customary knuckle balls as England were able to keep a tight leash on the scoring rate in a session where only 67 runs were added in 26.5 overs.

Mitchell expertly crunched Stokes through the covers before pulling the seamer with some authority to reach a half-century, with Watling reaching the milestone from a painstaking 180 balls.

Just as it seemed the wicketkeeper was settling in for the long haul, Broad made the breakthrough with the last ball before the tea interval.

After the ball was released from more than a foot behind the crease, some extra bounce startled Watling, caught the shoulder of the bat and flew to Burns to complete a gully catch.

Broad’s bouncer also accounted for Mitchell on the resumption, the Test debutant pulling down the throat of Archer at fine leg for the youngster’s first catch in England whites.

There were a couple of lusty blows from Tim Southee and Mitch Santner, who twice pulled Archer over the deep backward square-leg boundary, the second of which seemed to hit a steward on the head.

Southee edged a lifter behind off Woakes, who took the leg-side catch in the deep as Archer had his revenge on Santner before Neil Wagner chipped a Curran full toss to midwicket to bring New Zealand’s innings to a conclusion.

England needed to survive an hour and a half at the end of the day and their position could have been worse had Burns not been dropped by Ross Taylor at first slip before he was given another life by Jeet Raval at midwicket.

Burns was unbeaten on 24 at stumps with England captain Joe Root on six not out.