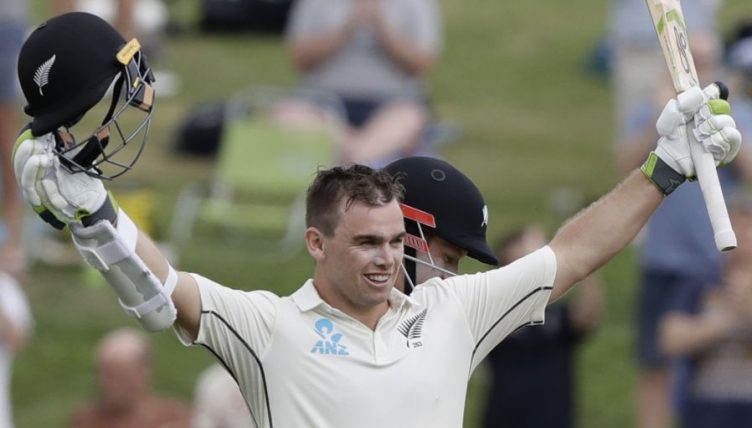 Tom Latham’s purple patch in Tests continued as he withstood England’s battery of seamers to lift New Zealand to 173 for three on a truncated opening day of the second Test at Hamilton.

Latham capitalised on being dropped on 66 to register his fifth century in his last 10 Test innings.

The opener was unbeaten on 101 by the time an afternoon thunderstorm led to play being halted after 54.3 overs.

England were therefore unable to make sufficient use of choosing to bowl first at Seddon Park, where the decision to omit Jack Leach in favour of Chris Woakes has left them without a frontline spinner.

Woakes took two for 41 on his recall, having been left out of the innings-and-65-run defeat in Mount Maunganui which means this Test is a must-win if England are to square the series in their final obligation of this tour.

That task may prove a little more onerous depending on the fitness of Ben Stokes, who was in visible discomfort and reached for his left knee during the only two overs he bowled.

He remained in the field but England later confirmed the all-rounder would be assessed before a decision on whether he can bowl in the rest of the innings.

However, Ollie Pope was dependable behind the stumps as he deputised for the injured Jos Buttler, conceding only four byes from a Jofra Archer bouncer that no specialist keeper under six-foot-six would have been able to gather.

This was only the sixth time in his 34 first-class matches he had taken the gloves, which meant he moved down to No.7 in the batting order to accommodate Zak Crawley, who conceded four overthrows after a woeful shy at the stumps early on.

He was not required to bat on his first day in England whites after Root had been seduced by the live grass on the wicket, although there was very rarely any of the lavish movement the captain may have been hoping for.

Nevertheless, Stuart Broad was able to make inroads early on as Jeet Raval’s flat-footed mow took the edge and flew to first slip, where Root took the first of his three catches.

Root’s next take was much less straightforward, diving superbly to his right to pluck the ball above the turf after Woakes had squared up Kane Williamson, who departed for four to leave the Kiwis on 39 for two.

While the Black Caps dangerman was back in the pavilion, Latham proved a trickier customer. Whenever England bowled too straight, he was happy to oblige by ruthlessly dispatching the ball to the midwicket fence.

Latham twice took two fours in an over off the expensive Sam Curran, who fruitlessly searched for swing all day, before, on 49, overturning an lbw decision off Woakes after technology determined the ball had pitched outside leg.

Latham went to fifty from the final ball of the first session and looked to be settling into a groove alongside Ross Taylor, who seemed to be trapped plumb in front on 25 by Broad only to be peculiarly reprieved by third umpire Bruce Oxenford.

Taylor tentatively reviewed after consulting with Latham. There was a spike on Snicko, but only after the ball had passed the bat, raising questions as to whether there was enough evidence to overturn the decision.

Soon after, Latham fenced at Archer but the ball burst through the hands of Stokes, diving to his left, conjuring memories of his drop of BJ Watling at the Bay Oval, where the Kiwi wicketkeeper went on to amass an epic 205.

Taylor was dismissed for 53 the ball after reaching his half-century. He aimed a cut at Woakes but was cramped for room and edged into the cordon to end a 116-run stand that was the backbone of New Zealand’s innings.

Root brought himself on to bowl in the final over before tea, in which Latham brought up his ton with a punch down the ground for his 15th four.

As the clouds rolled in ahead of the final session Archer was halfway through his over when the players came off for rain.

England were wearing black armbands on the opening day in honour of head coach Chris Silverwood’s father-in-law. Silverwood will head home after the second day’s play.