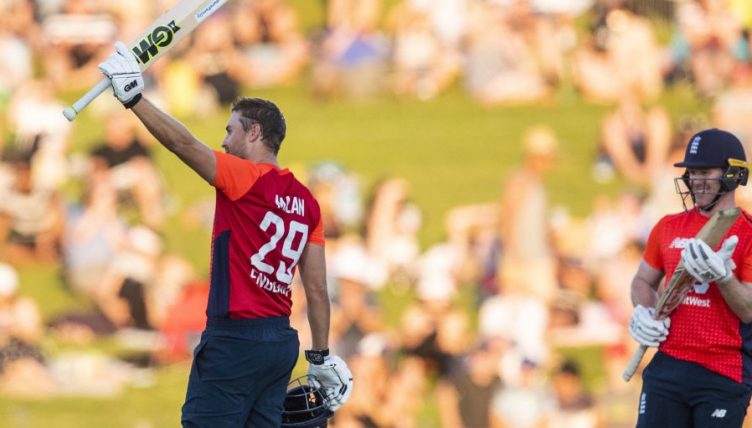 The series is now 2-2 and heading for a decider in Auckland thanks in large part to an astonishing partnership between Yorkshire new boy Malan and England skipper Eoin Morgan.

The pair came together at 58/2 in the eighth over and weren’t separated until the final over, by which time they had propelled the score to 240. Malan got to three figures with nine fours and six sixes, while Morgan fell nine short in a swashbuckling 41-ball effort.

182 – Dawid Malan and Eoin Morgan put on 182 together against NZ; it was the biggest stand in a men's T20I for @englandcricket (4th overall). Partners. #NZvENG pic.twitter.com/e3F0mpb2vN

England’s eventual 241/3 was always going to take some chasing, and Matt Parkinson’s three-wicket burst in his first two overs effectively ended the contest. He finished with 4/47 from his four overs of nervelessly slow legspin, and could have had five or six wickets with better assistance in the field.

Tim Southee had some fun on the same ground where he famously plundered a quick-fire 50 on Test debut against England about a million years ago now, but the result was a formality by then.

Malan had started slowly as he took 19 from his first 18 balls but he needed only a further 31 to reach three figures – becoming the fastest England T20I centurion in the process, beating his only rival – Alex Hales against Sri Lanka in 2014 – by 12 deliveries.

After helping England overhaul their previous T20 best of 230 for eight against South Africa at the 2016 World Twenty20, Malan has immeasurably boosted his hopes of a squad berth in next year’s T20 World Cup in Australia, and also given himself every chance of becoming the first Englishman on this list if he can add to his solitary ODI cap.