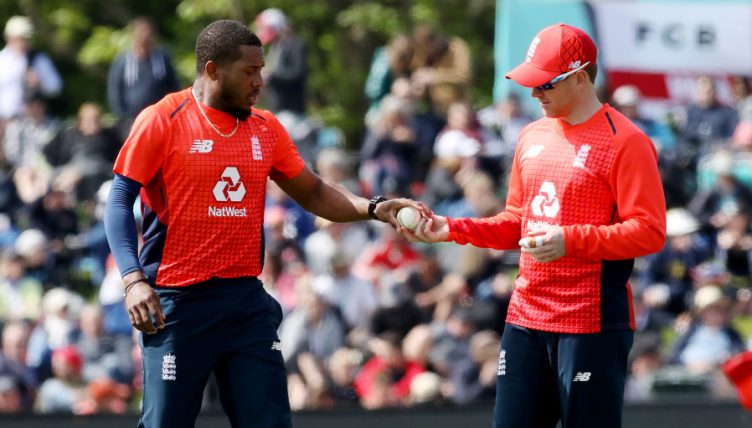 Eoin Morgan conceded England’s inability to complete the basics in the field cost his side a chance at victory in the second T20 in Wellington, but heaped special praise on bowling all-rounder Chris Jordan, describing him as “one of the best.”

England slipped to a 21-run defeat versus the Black Caps in Wellington amid a string of dropped catches in the field.

Seemingly incapable of playing multiple fine matches in a row, James Vince shelled a couple of regulation catches while also dropping a third (albeit extremely difficult) chance – though these were not his most embarrassing moments of the day, as we’ll get to.

Dawid Malan also grounded a simple chance while wicketkeeper Sam Billings was unable to cling on to a sharp opportunity over his head.

The brightness of the sun and swirling wind inside ‘the cake tin’ may have made catching difficult in a couple of cases but New Zealand’s total of 176 for eight proved insurmountable for England, who subsided to 155 all out after 19.5 overs.

While Morgan acknowledged England’s performance in the field was not up to scratch in the series-levelling defeat, they barely have any time to lick their wounds as the series continues in Nelson on Tuesday, a fact not lost on their captain.

The Irishman said: “When you drop that amount of catches it’s not a great reflection on the performance and the levels of fielding that we aspire to be.

“There were a couple of catches that went in the sun which made it look a lot worse but as regards our standard catches, we expect more.

“I think it’s more of an attitude thing because there’s such a short turnaround, the natural default of any player is to step back and not commit to a 50-50 chance or their mindset changes to go back in their shell.

“That’s not what we want, we want guys continuing to attack the ball, find themselves in hot spots if they’re good enough and if they drop catches, they drop catches. That’s the nature of it.”

Vince starred in the series-opening win in Christchurch with a half-century but endured an altogether more forgettable day in the New Zealand capital.

READ: From hero to zero for Vince as sloppy England drop second T20 to NZ

He followed up his modest display in the field by bringing out two left-handed gloves as he came out to bat, with the 12th man having to bring out a right one.

This innovative new cricketing take on Muhammad Ali’s classic rope-a-dope strategy unsurprisingly went up in flames after Vince quickly departed for just one off four balls after slamming to deep point.

Asked whether he had ever gone out to bat with the wrong gloves, Morgan rather generously replied: “Maybe I have, Championship game, I reckon. You’ve got eight pairs of gloves in your bag. It’s one of those things.”

While England’s fielding display was sub-par, matters barely improved with the bat as only four players reached double figures, with several curiously caught attempting to go straight over the top when the squarer boundaries were shorter.

Morgan was typically pragmatic about a defeat for a side containing a number of inexperienced internationals, as he said: “We have to make mistakes.

“If guys come in and smash it from the start and really find international cricket easy, I don’t think that’s a great opportunity given to guys.

Chris Jordan was one of the few in an England shirt to enhance his reputation, following up a stellar three for 23 with the ball with some belligerent hitting in his 36 from 19 deliveries.

He is up to second on England’s all-time list of T20 wicket-takers, going past Graeme Swann’s record of 51, to sit 13 behind Stuart Broad’s 65 scalps.

Morgan added: “He was exceptional. One of the reasons we combine these new guys with experienced players is to have them out on the field doing what they do.

“Sometimes you’re reiterating to bowlers or to fielders what they’re trying to do, and when they come and display it, it’s almost easier visually to see it in their heads.

“Having CJ out there with his experience and his execution is outstanding. He’s one of the best.”

Mitch Santner, who was the pick of New Zealand’s attack with three for 25, said: “We adapted pretty quickly to the surface and the dimensions. I think the team that adapts the fastest usually comes out on top.”