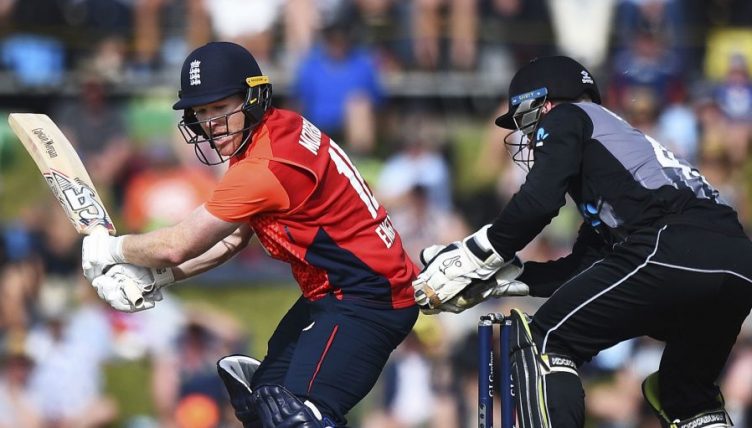 England captain Eoin Morgan hopes his inexperienced side learn quickly from their mistakes after a batting collapse led to a 14-run defeat against New Zealand in the third Twenty20.

Chasing 181, Morgan was at the crease alongside James Vince as England got the equation down to 44 required from the final 34 deliveries with eight wickets in hand at the picturesque setting of the Saxton Oval in Nelson.

However, the England captain’s departure sparked a dramatic disintegration that saw the tourists lose five wickets in the space of 19 balls, irreparably damaging their pursuit as they fell 2-1 down in the five-match series.

England’s line-up contained all six players who had not featured in a T20 international before this series and only Morgan and Sam Billings, the Irishman’s deputy for this series, had been capped more than a dozen times.

Morgan said: “It is the most inexperienced side that we will field. We can’t come out expecting to win 5-0, we do need to learn and make mistakes throughout the whole series.

“An important part of learning is recognising exactly where you were and what you did wrong. You can’t be blindsided or be stubborn enough to not take in good information.

“It has been a great learning day for us and hopefully the guys take in the information and learn from that, hopefully pretty quickly.

“They have to, and they have to play games so in situations like that you have to throw them out in the middle of it, you can’t say your senior players always have to support them and nurture them.

“The reality of it is there is only a certain amount of it that you can do, guys need to go out and perform as well.”

Morgan was caught on the boundary while Billings was needlessly run out after a miscommunication with Vince, who tamely chipped to mid-off to fall one short of his half-century.

By the time Lewis Gregory and Sam Curran fell in the space of three Lockie Ferguson deliveries, England’s hopes had all but vanished, and they limped to 166 for seven.

Morgan said: “With a lot of wickets in hand you’d expect us to win. Certainly we did, we were in control pretty much up until that point. The guys that came in, we didn’t do the simple things right.

“We didn’t establish a partnership, we didn’t hit with the wind, things that the Black Caps did throughout. We do have to get better and calmer in those situations and when we’re chasing.”

Dawid Malan moved through the gears as he went from 15 off his first 14 balls to take 40 off his next 20, the last of which saw the opener belt an Ish Sodhi full toss to Martin Guptill at deep midwicket.

Morgan said of his fellow left-hander: “It’s extremely disappointing for him. He’s one of the only opening batters that ever talks about seeing the majority of the innings through and being there at the end. It will hurt him.”

Matt Parkinson marked his England debut with one for 14 but curiously only bowled two overs, while Lancashire team-mate Saqib Mahmood was expensive and finished with 4-0-49-1.

The Curran brothers bowled well to record combined figures of three for 58 as New Zealand, led by Guptill’s fiery 33 at the top of the order and Colin De Grandhomme’s 55 from 35 balls, posted 180 for seven.

On his international bow, highly-rated opener Tom Banton kick-started England’s reply by clubbing express paceman Ferguson for six over midwicket but was bowled for 18 off 10 balls after missing a ramp off Blair Tickner.

Morgan, though, has no problem with the dismissal, saying: “I thought he came out beautifully. He’s a free-spirited guy who plays expansive cricket, and we want him to do that.

“He gets out playing one of his strongest shots. We’ll encourage him to keep doing that. We don’t want him to go away from his natural game.”