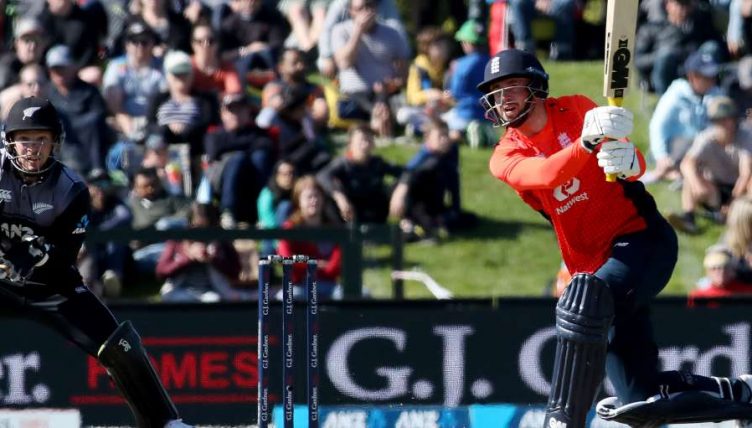 The first meeting between New Zealand and England since some game or other at Lord’s a few months ago was altogether less fraught as a maiden Twenty20 international 50 for James Vince steered England to a comfortable seven-wicket win.

England’s first global 50-over title came by the barest of all margins after defeating the Kiwis on boundary countback at Lord’s in July, but the latest encounter was an altogether more serene experience for Eoin Morgan’s side.

Vince was the headline act with 59 from 38 balls after England’s new-look pace attack had restricted New Zealand to 153 for five as the Chris Silverwood era started on a positive note in the picturesque surroundings of Hagley Oval.

While Morgan got his side over the line with his first six to go with four fours and finish on 34 not out, it was Vince who laid the foundations with a series of predictably sumptuous strokes as England drew first blood in the series.

Vince, whose previous T20 best was the 46 he made against Pakistan in Sharjah in 2015, has often struggled in an international shirt but he made a compelling case for his continued selection as England’s preparations for next year’s T20 World Cup got under way in earnest.

Pat Brown bowled expertly at the death while fellow international debutant Lewis Gregory was a virtual bystander, required with neither bat nor ball against a New Zealand side containing five of the side that were involved in the World Cup final.

Sam Curran came in for his T20 bow and it was he and elder brother Tom who opened the bowling in only their second international together after England won the toss and decided to field first.

They proved a useful pairing as a disciplined line and length yielded just 15 runs from the first four overs.

By this time Guptill’s impatience had gotten the better of him as he dragged on to his stumps off Sam Curran, who then conceded three sixes in the space of four balls as the Kiwis belatedly fired into action.

Munro’s blistering 107 not-out downed England in a warm-up earlier this week but he was dismissed for 21 on Friday, clipping a low full toss from Jordan to England captain Eoin Morgan at midwicket.

Momentum was never with the Kiwis after that, with Tim Seifert (32) and Colin De Grandhomme (19) sparking briefly before departing to catches in the deep – the former from a waist-high full toss off Jordan.

The hosts did not reach three figures until the 15th over, though Ross Taylor and Daryl Mitchell put on 56 in 38 balls to lift their side towards a competitive total.

Taylor was dropped in the penultimate over before perishing for 44 after being caught at deep midwicket, handing Brown his first international scalp in an impressive final over which yielded just six runs, with his subtle variations keeping Daryl Mitchell (30no) and Mitch Santner (1no) subdued.

Bairstow was watchful against Tim Southee and Lockie Ferguson at the start of England’s reply but he took three fours and a six when the less experienced Scott Kuggeleijn erred in line and length.

Dawid Malan could not capitalise on a reprieve after Guptill spilled a difficult chance, contributing just 11 in his first T20 in nearly two years before skewing Santner to short third man.

Guptill made amends with a superb catch on the boundary to see the back of Bairstow for 35 off 28 balls but Vince had already settled into his stride, getting off the mark with a sweetly-timed back-foot punch for four.

While England were a run behind their opponents’ mark at the halfway point, Vince provided the impetus with back-to-back fours off Sodhi before creaming Kuggeleijn over midwicket for six.

His seventh four brought up a supreme 33-ball half-century and though he picked out deep midwicket to give Santner his third wicket, he had built the platform for Morgan and Billings.

The pair got the equation down to 10 from the final two overs and Morgan’s brutish six over the midwicket boundary off Southee ended proceedings.