Home England in New Zealand 2019/20 Root, Burns scratch out centuries as England claw their way back in Hamilton

Root, Burns scratch out centuries as England claw their way back in Hamilton 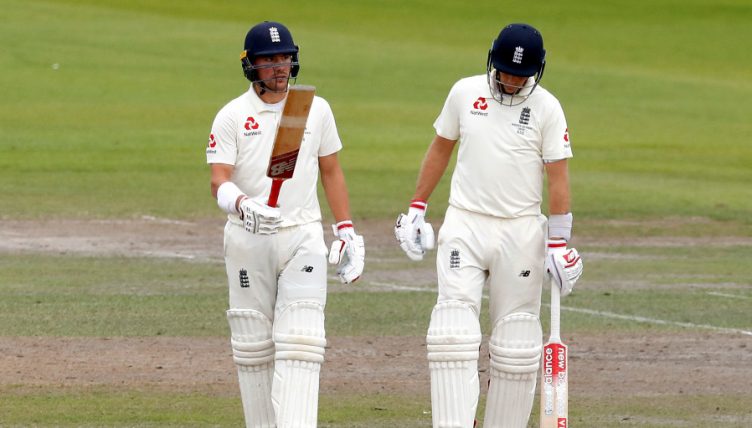 Joe Root finally silenced his conversion critics after the England skipper batted for an entire day’s play in Hamilton – an almost seemingly impossible task for an England batsmen in recent times.

Beginning the day with England already two down for very few, England were heavily reliant on Root and Rory Burns to deliver the goods, and deliver they did.

The duo each plundered a century with Root still unbeaten at the close of play to revive England’s hopes of escaping the second and final Test with a positive result.

There has been scrutiny over whether the captaincy is impinging on Root’s batting because of his average of just 27.4 in his 10 previous Tests this year, but he ended his lean trot with an unbeaten 114 at Seddon Park.

His 17th Test hundred, allied to Rory Burns’s 101, carried England to 269 for five – still trailing New Zealand by 106 before the players were brought off with 16.2 overs still left in the day because of rain.

Root may not have been at his most fluent, and only 39 of his runs came in front of square, but he judged his innings on a slow surface expertly, reaching three figures for only the second time this year.

There were a number of flicks into the leg-side as he contented himself with playing on the back foot, while the 259 balls it took him to reach his hundred was his slowest in England whites.

But he offered New Zealand’s willing attack no chances while his 177-run stand alongside Burns was only ended after the opener was run out, inches short of his ground, after coming back for a second run.

Burns had a couple of minor challenges in his innings but overcame them superbly as he recorded just his second Test hundred and first overseas, before his dismissal saw England slip from 201 for two to 262 for five.

Root was still there at the close and will resume on day four, alongside Ollie Pope, on four not out, looking to push England towards a first-innings lead which could determine the outcome of the contest and series.

Resuming on 39 for two on Sunday morning, Burns and Root had the words of Stuart Broad ringing in their ears, the seamer saying the previous evening “if you were good at batting, you’d fancy” batting on the benign surface.

Indeed, Broad tipped Burns as the key batsman despite the opener being dropped twice on Saturday night. New Zealand may have had the whip hand at the start of the day but Burns and Root steeled themselves for the long haul.

A Neil Wagner bouncer thudded into the chest of Burns, who glanced the next delivery beyond the despairing dive of leg gully, but any doubts about him under the short ball vanished when he pulled the left-arm seamer for back-to-back fours.

Burns top-edged Daryl Mitchell short of the deep square-leg fielder and Root jammed his bat down a Wagner knuckle ball that hooped in, while the England skipper overturned a caught behind decision on 47, immediately reviewing after umpire Paul Wilson wrongfully adjudged he had been strangled down the leg-side off Mitchell.

The pair went past half-centuries before lunch and after that there were remarkably few alarms for a side whose batting has been constantly under scrutiny as Burns and Root settled into a patient rhythm.

Indeed, the only worry for England seemed to be some miscommunication between Root and Burns, who was sent back attempting a second on 87 and survived only because Matt Henry interfered with a throw from mid-on.

But immediately after reaching a 208-ball ton, Burns perished when Jeet Raval’s throw from the leg-side led to BJ Watling whipping off the bails with the England batsman short of his ground.

Ben Stokes looked in fine fettle but departed for 26 when Tim Southee extracted a fraction of movement away from the left-hander and Ross Taylor scooped the edge just above the ground at first slip.

Root clipped Wagner fine for four to get to 99 before an under-edge off the next ball bounced over wicketkeeper Watling and away to the boundary – one of very few loose strokes.

The moment marked the first time since September last year that two Englishmen have amassed Test hundreds in the same innings – when Root and Sir Alastair Cook did so in the latter’s last Test against India at The Oval.

Zak Crawley got off the mark in Tests with a hurried single – diving to make his ground – but that was his only contribution as Wagner angled one across him and Watling took a simple catch.

By this stage, the skies were turning increasingly leaden and the floodlights were turned on before the heavens opened, leading to a swift end to proceedings for the day.