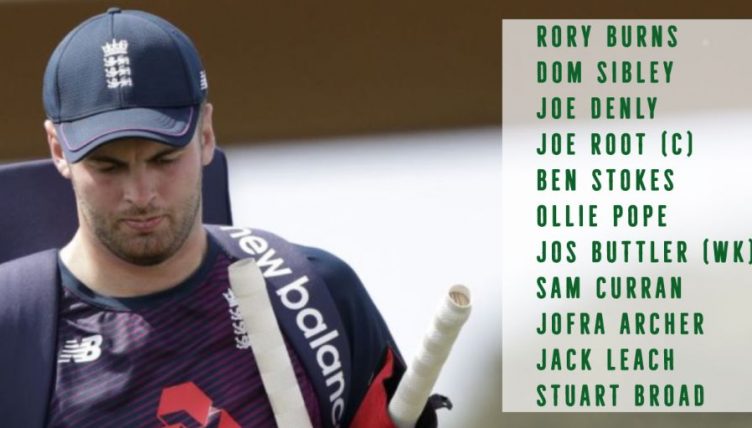 Dom Sibley will make his England debut in the first Test against New Zealand at Mount Maunganui tonight.

Joe Root was tight-lipped about the XI in his final press conference on Wednesday but, a couple of hours later, England confirmed they will be unchanged from the side that drew a three-day warm-up in Whangarei last week.

Sibley – who was the only batsman in Division One of the County Championship to go past 1,000 runs this year – will therefore partner Rory Burns at the top of the order.

When England go out to bat in the first Test against New Zealand, Rory Burns (12 Tests) will have had more opening partners for England than Andrew Strauss (100 Tests) 🤯

Joe Denly opened alongside Burns in the final Ashes Test but will now move down a place to number three which allows Root to occupy his preferred position of four.

Root’s batting average before taking the England captaincy stood at 52.8 from 53 Tests but that figure shrinks to 40.81 in the 33 matches he has been at the helm.

The Yorkshireman said: “No, I’m not concerned by it. I know I’ve not performed as I’d have liked in previous series – probably over the last year – but they are the challenges you face as an international player.

“It could have been exactly the same if I wasn’t captain. I’ve gone away and worked on a few things and think my game is in good order coming into this series.

“That’s all part and parcel. I’ve been through it before at different points of my career when I probably under-performed in my own mind.

“But I feel like a strong enough character, I still have the desire and desperation, to get back to where I was a couple of years ago and hopefully beyond that.”

England's Test XI actually looks like a 'proper' Text XI for the first time in a while. Still be 55/6 by midnight tonight, obvs, but it's a far more balanced looking XI. Two actual openers! Root at four! Keeper at seven! Broad at 11! Yes to all these things.

England’s decision to stick with an unchanged side from their second practice match means Ollie Pope will make only his third Test appearance and his first in 15 months.

The left-arm angle of Sam Curran has seen him given the nod ahead of Chris Woakes while Jofra Archer is set for his first Test match overseas following an epic summer in which he starred in the World Cup and Ashes.

New Zealand paceman Lockie Ferguson, like Archer capable of exceeding 90mph on a regular basis, will be kept waiting for his Test debut.

“It’s great to have so many guys in the environment that are very much raring to go and all offering different things,” Williamson said.

“The three that we’ve gone with are guys that have been in the group for a long period of time and performed really well for us. I know they’re looking forward to getting back into Test cricket.”

Williamson, whose side have won five and drawn one of their last six Test series, was adamant that including Ferguson in an attempt to offset Archer was not something he was willing to countenance.

Williamson added: “Don’t get me wrong, the excitement of having a guy in our camp that can bowl at such high speed is very attractive.

“Jofra’s obviously been outstanding for England but you don’t just look at mirroring the opposition.”