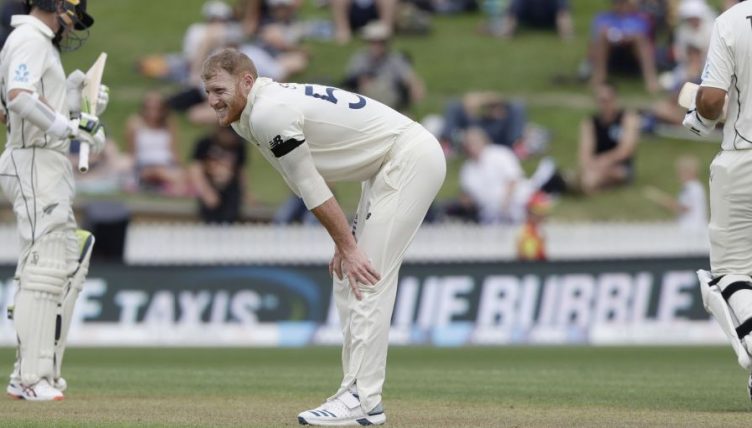 Chris Woakes admitted the possibility of losing Ben Stokes’ bowling as England seek to level the Test series against New Zealand at Hamilton would be a major blow.

Stokes was in visible discomfort in his only two overs on the opening day of the rain-affected second Test at Seddon Park, where Tom Latham’s unbeaten century underpinned New Zealand’s 171 for three.

The England all-rounder held his left knee and was limping after his brief spell with the ball, and the tourists confirmed he will be assessed before a decision is taken on whether he can bowl in the remainder of the innings.

“Ben’s overs are not just a bonus, he’s a world-class bowler when he’s at his best,” Woakes said. “Of course we’ll move his overs, whether he can bowl or not I don’t know.

“He’s obviously got a bit of pain in that left knee, I don’t know exactly what it is but of course we want a Ben Stokes at full tilt if we can because he’s world class.”

Stokes underwent surgery on his left knee in May 2016 while he revealed during the first Test against the Black Caps in Mount Maunganui last week that he was managing it.

With less than four weeks to go until the start of the four-Test series against South Africa, Stokes’ latest injury scare is a worry.

“Ben is one of the hardest trainers and works hard on his fitness and everything,” Woakes added. “Hopefully we can get that right. The medical team will be working really hard to do that.

“There’s a bit of a gap between the end of this Test match and the start of the South Africa one so hopefully (they can) get him as close to 100 per cent as possible.”

Stokes was unable to cling on to the only chance offered by Latham, on 66, the ball bursting through his despairing hands as he dived to his left after the New Zealand opener had edged into the cordon off Jofra Archer.

It conjured memories of his drop of BJ Watling in the first Test at Mount Maunganui, where the New Zealand wicketkeeper went on to amass an epic 205 in the Black Caps’ innings-and-65-run victory earlier this week.

“Ben, in particular, is probably the hardest trainer I’ve ever seen, particularly when it comes to his fielding and his catching,” Woakes said.

“It’s just the way it goes. Unfortunately we’ve put a couple down and it’s hurt us, hopefully this one won’t hurt us quite as badly as the last one did.”

Woakes was also unfortunate not to account for Latham, who was twice reprieved on review by the ball pitching outside leg, although the Warwickshire seamer took the key wickets of Kane Williamson and Ross Taylor.

Woakes was recalled at Seddon Park in favour of slow left-armer Jack Leach as England decided against selecting a frontline spinner.

“Considering I haven’t had much match practice on the tour, I felt in reasonably good rhythm,” Woakes said.

Only 54.3 overs of play were possible on Friday because of a thunderstorm that wiped out all but three balls of the final session, as England were unable to make sufficient use of choosing to bowl first.

Woakes added: “It’s probably too early to tell. It would have been nice to have had that last session.”

Latham’s 101 not out is the fifth time in his last 10 Test innings he has gone past three figures.

Asked if there was a reason for his sudden purple patch, he responded: “I’m not sure what it is. If I knew what it was I’d be trying to bottle that up as much as possible.

“For me, it’s just about trying to stick to a plan for long periods of time and that’s probably what’s given me success over the last year or so.”