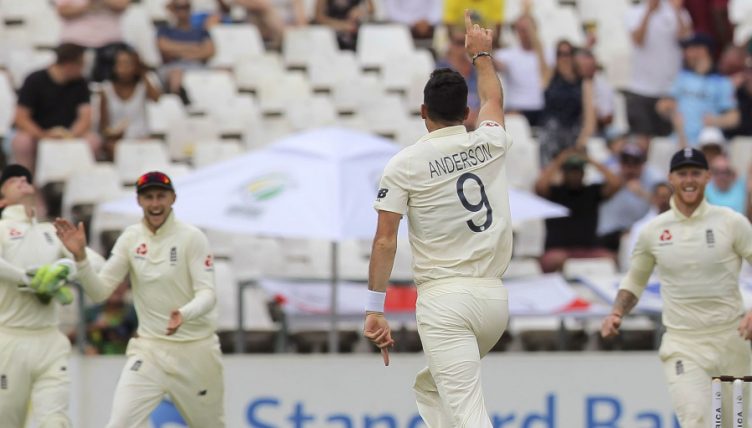 James Anderson has been ruled out of England’s last two Tests against South Africa and faces up to eight weeks on the sidelines after suffering a rib injury during the rousing fifth day victory in Cape Town.

The news is a major setback for the 37-year-old, who was just two games into his comeback from a calf problem sustained on the first morning of last summer’s Ashes.

Anderson spent almost five months working back to full fitness and was back at his rhythmical best as he helped the tourists level the series with a 189-run win, taking exemplary match figures of seven for 63.

He was in visible discomfort on the final day, though, clutching his side at times and grimacing through two painful overs after tea.

An MRI scan on Wednesday morning confirmed the bad news.

“James Anderson has been ruled out of the remainder of the Test series against South Africa after sustaining a left rib injury in England’s second Test victory at Newlands,” read a statement from the England and Wales Cricket Board.

“Anderson felt tightness and discomfort at the end of the morning session on day five and was only able to bowl eight overs during the day. He will return to the UK in the next few days.”

Frustrating to be missing the rest of this series with a broken rib but hopefully will be healed in a few weeks! Will be supporting the boys from home 🦁🦁🦁 pic.twitter.com/rPM3FebQi5

With Anderson out of the picture, England will be desperate for either Mark Wood or Jofra Archer to prove their fitness ahead of next week’s third Test in Port Elizabeth.

After the illness that plagued the early stages of England’s tour, Anderson is now the second key player forced out of the series by injury.