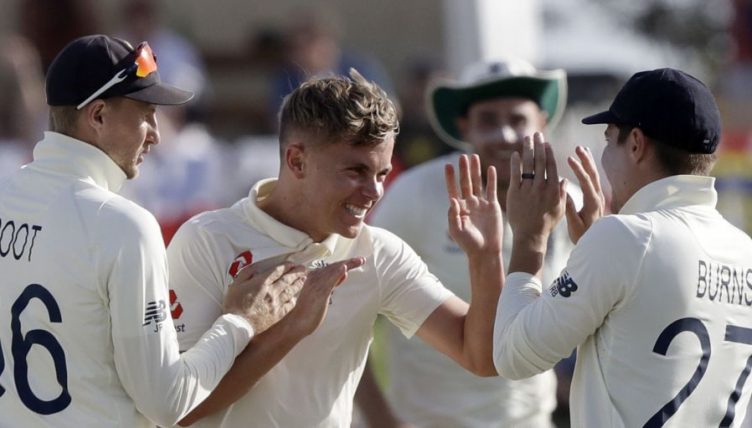 Sam Curran carried England’s ailing bowling attack on his young shoulders as South Africa posted 277 for nine on day one of the Boxing Day Test in Centurion.

When Joe Root boldly sent the hosts in on a green-tinged pitch, the 21-year-old all-rounder was probably expecting to bear the lightest load in a five-strong seam attack.

Instead he kept the tourists’ heads above water with four for 57 on a trying day.

Quinton de Kock top-scored for the Proteas with 95 on a tricky surface and it is impossible to judge the first-innings score until England’s batsmen have had their say.

Ben Stokes boosted England by declaring himself available in the morning, with his father Ged in a serious but stable condition in a Johannesburg hospital, but was unable to bowl a single ball and spent two extended periods off the field being treated for dehydration.

It was unclear whether he was suffering from the same sickness that has blighted the trip and ruled Ollie Pope, Chris Woakes and Jack Leach out of this match, but if he has been affected England could find themselves fighting with one hand behind their back for the remainder of the contest.

Elsewhere, the excitement of seeing James Anderson, Stuart Broad and Jofra Archer take the field together for the first time was diluted by their respective struggles in temperatures touching 34 degrees.

Broad and Archer are only just emerging from their own week-long battle with the bug and Anderson was playing for the first time in five months after a calf injury. All three appeared to be flagging at times, but plugged away regardless while Curran did the bulk of the damage.

He may not be blessed with extreme pace or unnatural skill, but Curran continually finds a way to contribute to the cause and here got his rewards for 19 disciplined overs of left-arm swing that asked all the right questions.

Things might have unfolded more simply had South Africa subsided from a precarious position of 111 for five midway through the afternoon session, a base built around three tame dismissals.

Anderson kicked off his milestone 150th Test cap with a wicket from the very first ball of the day, Dean Elgar feathering a gently-paced leg-side loosener straight to Jos Buttler.

It was hardly vintage Anderson but the 37-year-old has worked diligently to come back from the calf problem that ruined his summer and was visibly delighted to be back in business.

He and Broad did not get as much joy from a lively new ball as they might have but Curran was on hand to get things back on track in his first over, an over-confident Aiden Markram picking out midwicket with an ill-judged flick.

England secured bragging rights for the opening session when Zubayr Hamza threw away a highly promising knock of 39 by fending away from his body at Broad and edging to Stokes.

A lunch score of 79 for three soon took a turn for the worse, Curran getting the better of debutant Rassie van der Dussen outside off and Broad bagging the key scalp of home captain Faf du Plessis with a testing delivery.

At that point De Kock took matters into his own hands, launching a counter-attack with brazen aggression. He took 14 off a Curran over, benefited from some chunky outside edges that raced to the ropes and survived two dicey moments off Root’s part-time off-spin.

The first, on 24, saw a massive top edge slip through the hands of Anderson as he sprinted round from mid-off and the second resulted in a debated slip catch. Stokes seemed unsure if he had gathered cleanly and, though the ‘not out’ decision came swiftly from the third umpire replays did not seem decisive.

De Kock rode that luck well, passing 50 in 45 balls and putting on an important stand of 87 with another new face, Dwaine Pretorius.

England were missing Stokes’ ability to share the burden of the frontline seamers but and once again looked to Curran, who responded in style. He parted the pair by slanting one across Pretorius, who offered Root his third catch of the day, and then came for De Kock.

The number six had slowed up as he got closer to three figures but did little wrong, pushing forward in defence only to be beaten by a sliver of movement that left Buttler with a regulation take.

Archer and Broad both struck in their final spells of the day, with Kagiso Rabada last man out just before stumps.