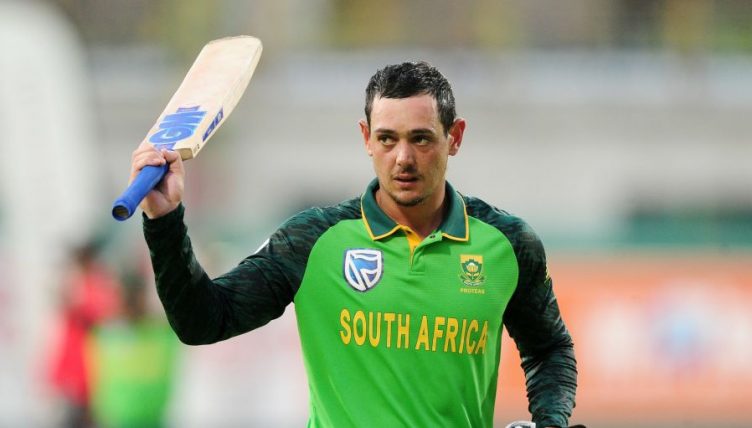 Unlike the unforgettable World Cup final at Lord’s six months ago, there was precious little drama in this series opener as a 173-run stand between de Kock and Bavuma broke the back of a record run-chase of 259 at Cape Town.

De Kock marked his first match since succeeding Faf du Plessis as ODI captain with 107 from 113 balls and while Bavuma fell for 98, their efforts helped to overhaul England’s 258 for eight with 14 balls to spare.

England’s total was underwhelming given their extraordinary feats with the bat in recent years, but they were indebted to Joe Denly’s industrious 87 off 103 balls after they had collapsed from 51 without loss to 131 for six.

The decision to choose Denly, 33, for a series which marks the start of the next World Cup cycle was questioned in some quarters but he vindicated his selection after Tabraiz Shamsi’s three for 38 left England floundering.

The left-arm wrist-spinner exploited a slow pitch that offered turn and a little bounce, and among his victims was Tom Banton, one of two ODI debutants for England at the start of this three-match series, alongside Matt Parkinson.

Banton made it to double figures, as did the rest of England’s top six, but only Denly was able to offer anything tangible and their efforts were put in a harsh light by De Kock and Bavuma in this day-night affair.

While Chris Woakes made an early breakthrough on his 100th ODI appearance, England’s seamers found little joy in taking pace off the ball – as their South African counterparts had done – and the decision not to include either Adil Rashid or Moeen Ali alongside fellow spinner Parkinson came back to haunt them.

There some pleasing strokes from Jason Roy and Jonny Bairstow – two of five players retained from the side that beat New Zealand last July – after the tourists had been asked to bat first but both openers struggled for timing.

Roy departed for 32 after driving to long-on while Bairstow went six balls later for 19 after clothing to mid-off, whereafter a sensational run-out from Rassie van der Dussen led to the downfall of Joe Root for 17.

The Test captain was short of his ground at the non-striker’s end after van der Dussen gathered the ball at square-leg and threw the stumps down from 30 metres away while still on his knees.

Shamsi then got in on the act as captain Eoin Morgan (11) edged low to first slip, Banton was trapped lbw on 18 after missing a sweep and then Sam Curran was bowled round his legs.

Denly, though, was able to stop the steady trickle of wickets alongside Woakes, the pair hunkering down to a sizeable rebuilding job and eschewing any form of risk early into their 91-run stand.

Denly would eventually grow more adventurous to reach his first ODI fifty since September 2009 before dispatching a Lungi Ngidi slower ball for England’s first six in the 47th over, after Woakes had driven to mid-off on 40.

Denly holed out to long-on in the final over but – given no side had chased more than 258 in an ODI at Newlands – England may have fancied their chances and even more so after Reeza Hendricks edged behind off Woakes.

Sam Curran missed a difficult caught and bowled chance off de Kock, whose booming drive off the left-arm seamer caught the edge only to fly beyond the grasp of wicketkeeper Bairstow.

Morgan introduced the off-spin of Root in the seventh over but de Kock and Bavuma warmed to their task, the pair exploiting gaps in the field to take quick singles which were interspersed with the odd boundary.

Tom Curran was unable to hang on to a desperately tough caught and bowled chance when De Kock was on 80 before the opener brought up his 15th ODI hundred, after which he was bowled by Root.

Bavuma seemed to be cramping as he neared his ton, which he was denied after being trapped plumb in front by Chris Jordan, leaving van der Dussen (38no) and JJ Smuts (7no) to get South Africa over the line with more than two overs to spare.