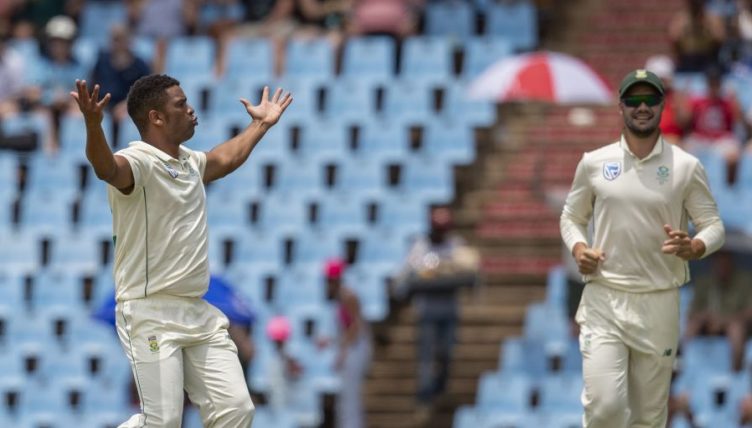 South Africa took full control of the Boxing Day Test at Centurion as England lost their last seven wickets for just 39 to be bowled out for 181 and concede a three-figure first-innings deficit in tough batting conditions.

The Proteas extended their 103-run advantage to 175 before stumps, albeit for the loss of four further wickets themselves on a day when 15 fell in total.

Vernon Philander was England’s main tormentor, kicking off his farewell series with the extraordinary figures of 4/16 from 14.3 immaculate overs, while Kagiso Rabada (3/68), Anrich Nortje (2/47) and Dewald Pretorius (1/23) all playing their part.

Philander and Rabada removed England’s openers Rory Burns and Dom Sibley in hostile new-ball spells, while Joe Root then edged behind to give Quinton de Kock one of his six victims with the gloves after his crucial 95 on day one.

Ben Stokes and Joe Denly fought back with a counter-punching partnership of 72 inside 15 overs, but the loss of Denly just after reaching his half-century prompted an all-too familiar collapse. Sam Curran (20) and Jos Buttler (12) were the only other batsmen to reach double-figures after Stokes fell for 35.

Rassie van der Dussen and nightwatchman Nortje survived to the close – the latter forced to take evasive action from a couple of accidental Archer beamers late in the day – to leave the Proteas with plenty of power to add to what already looks a decent lead.