England struggles continue as batsmen fail to cash in on starts 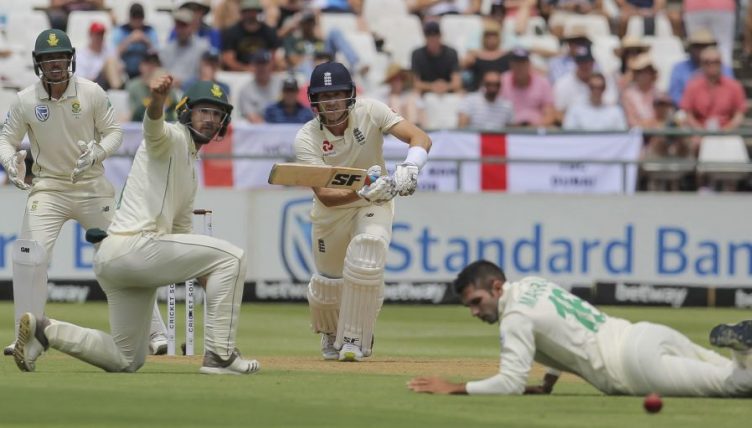 England slumped to an underwhelming 262 for nine on day one of the second Test against South Africa, another disappointing entry in a tour that is lurching from bad to worse.

After a heavy defeat in the series opener at Centurion and two injury blows in the last 24 hours, captain Joe Root must have hoped his luck was turning when he won the toss and opted to bat on a friendlier looking surface.

England talked tirelessly about the importance of big first-innings runs but under-delivered once again in Cape Town, with Ollie Pope’s unbeaten 56 the high point of an otherwise unimpressive showing.

If losing pace spearhead Jofra Archer to an elbow problem goes down as bad luck and Rory Burns’ football injury represents a self-inflicted wound, then the opening day at a packed Newlands was a simple a case of being outplayed.

Anrich Nortje was the pick of the bowlers, sending back Root (35) with a brute of a bouncer and drawing a tame dismissal from Ben Stokes (47) at the site of his career-best 258 four years ago.

Root was always likely to bat first, burned by the opposite decision last week and presented with a more benign surface, but a rookie opening partnership of Dom Sibley and Zak Crawley, the latter deputising for Burns, always looked vulnerable.

Vernon Philander needed just two overs with a fresh Kookaburra ball to knock off Crawley, who nicked the latest in a sequence of delicious away-cutters with just four to his name.

Sibley and Joe Denly responded with a battling partnership of 55 – a survivalist’s stand that would have raised English spirits had Sibley not edged Kagiso Rabada just before the break to make it 67 for two at lunch.

Root had been hit in the chest with the third ball of his innings but scored briskly at the start of the second session, overtaking Denly, who was marooned on 21 for 48 deliveries.

Nortje was the man to drag it back for South Africa, cracking Denly on the back of the helmet then taking Root’s outside edge on 31.

Rassie Van Der Dussen parried the head-high chance for four but two balls later Nortje flung down a 90mph bouncer that thumped the glove and looped to Quinton De Kock, Root having left his top hand in harm’s way as he crouched to avoid contact.

Denly was next to go for 38, losing his off stump to Keshav Maharaj after leaving a yawning gap in his defence. England needed a major partnership if they were to transfer any kind of meaningful pressure back on to the hosts and in Stokes and Pope they at least had batsmen with enough range to oblige.

Pope got going with a couple of pleasing blows, one through cover then another eased beyond midwicket, before Stokes asserted his ‘alpha’ credentials.

After showing Maharaj plenty of respect he finally found a delivery to his liking, skipping forward and launching a towering six down ground.

When Nortje attempted to put Stokes back in his box, surprising him with a lifter from round the wicket, the all-rounder promptly readjusted and punched to the extra-cover ropes.

By the time Maharaj lost his length and saw a long-hop flogged for four more it seemed as though Stokes was in the mood to take hold of proceedings. And then, just as quickly, he was gone.

Nortje landed the prize with a ball that should have been too full and too wide to cause grief, but Stokes only half-committed as he pinged to Dean Elgar at cover.

Stokes covered his eyes as he departed, shielding himself from either the South African celebrations or the big screen replays. Jos Buttler’s entertaining 29 offered brief respite before his positioning let him down, and the next three wickets fell in a heap around Pope.

Sam Curran left a Dwaine Pretorius ball that sent off stump flying, Dom Bess bagged a golden duck on his Test recall and Stuart Broad accidentally jammed bat against pad to be cleaned up by Rabada.

James Anderson hung around long enough to see Pope past 50, with England’s innings continuing into a second day only after the latter was caught off a Rabada no-ball late on.